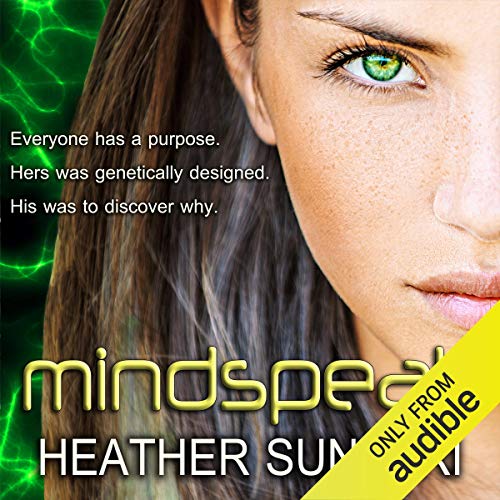 By: Heather Sunseri
Narrated by: Amy Landon
Try for £0.00

She was created for a purpose so revolutionary, someone was willing to kill for it.

Seventeen-year-old Lexi Matthews keeps two secrets from her elite boarding school classmates - she's the daughter of a famous and controversial geneticist, and she can influence people's thoughts.

But after new student Jack DeWeese heals her broken arm with an anything-but-simple touch, he forces Lexi to face a new reality - her abilities reach much further than speaking to the minds of others.

After Lexi's father goes missing and she receives threatening emails, she can't decide whether to fall into Jack's arms or run and hide.

As Lexi seeks answers to what she and Jack are, she discovers a truth more unsettling than anything her science books can teach. And letting Jack into her life of secrets is not only a threat to her very existence, but it just might break her heart wide open.

What listeners say about Mindspeak

I became very bored with the story and found it impossible to finish.

More suitable for teenagers than adults I suspect.

it was great, the story line was absorbing and interesting, the beginning is a bang, going straight into the plot. the whole thing makes u want to listen to it over and over again. overall it was awesome!

The concept is great, but the characters aren't relatable and the structure of the story is all over the place.

s young people's story with lies of young love and good / characters. not too taxing but a good yearn

I gave this a 5 star for the story that was so different and creative. Heather Sunseri has created a 17 year old overly protected teen but as the story unfolds we reolize she has hidden powers that will develop into something far more powerful. People around her are hidding too much info and is admittedly very frustrating to the reader but oh so interesting.

Not sure why this has got such criticising reviews. I enjoyed it, even though the topic of genetic research is really not something I would normally choose to read about.
True, the lead character isn't very savvy but she had led a sheltered life and hadn't had any reason not to trust those close to her before. As for having to many unanswered questions, I don't see the problem. What would be the point in answering them in the first book?
I'm so pleased there are more books in the series & I'm looking forward to making a start on them.

this was too long and I lost interest. found it hard to read till the.

This book is the literary equivalent of blue balls. I realize it is a series and not all answers can be given in the first book but I have never felt so - unnecessarily - teased by a book. Question after question after question all while treating the protagonist like they should or already do know all the answers. This mixed with the incredibly meaningless and ping pong like dialogue made for a thoroughly unsatisfying read and even more so as audio. It didn't actually get interesting until the last few paragraphs. Which is all the more disappointing because the following books might - possibly, maybe - be good but no, I just can't.

Lots of twists and turns. However, I was so annoyed with the female lead character that I almost couldn’t finish the story. If you’re looking for a story about a girl who asks the wrong questions over and over again and trusts the wrong people, this is your book!

good narration but you have to read the whole series to get true final satisfaction.

It was really very good until the last few minutes when she was being forced to get a little to close to the jerk who's been controlling her mind. As soon as he told her she would wake up the next day and feel a desire towards him I turned it off!! I hate it when authors do that so, I won't be reading the rest of her books! I'm going to call and get my money back too.

The concept behind this story is intriguing and toward the end, it got better. In fact I'll read the next in the series because of it, but the heroine in the story drove me crazy most of the book. A weak, whiny girl who is confused and fighting herself most of the story has a lot of bad things happen. She overreacts to most of it and underreacts to the rest. The narrator did a nice job performing the book.

When a women just entering adulthood discovers a gift that seems like a curse in the middle of a world of secretes the challenges of coming of age becomes almost impossible. The story moves quickly and negatives would be too much action without building a back drop to carry so much going on at the same time. It is also a good mystery and all and all an enjoyable listen.

Good book but stopped without an ending

This book was good and well read. I knew it was getting ready to end but surprised the way it just stopped. I love a series and usually will complete the whole series back to back but the way this ended or should I say did not end left me frustrated!

story drags,, hate an unfinished ending, even if another book follows. won't read another one

I liked most of the characters. Jack is annoying. Seth is wishy washy. The narrator is solid. Charter development was okay. Left plenty storyline for book two.