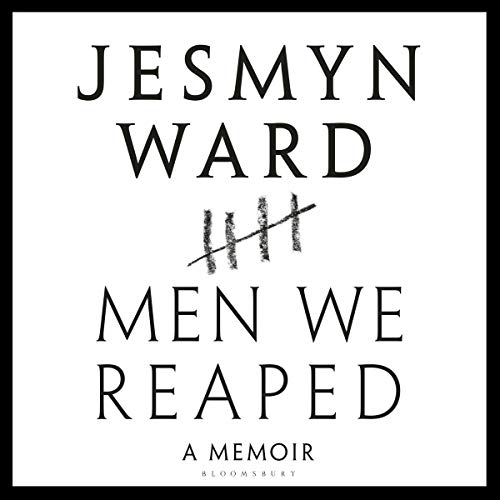 By: Jesmyn Ward
Narrated by: January LaVoy
Try for £0.00

"And then we heard the rain falling and that was the blood falling; and when we came to get in the crops, it was dead men that we reaped'." (Harriet Tubman)

In five years, Jesmyn Ward lost five young men in her life - to drugs, accidents, suicide and the bad luck that can follow people who live in poverty, particularly Black men. Dealing with these losses, one after another, made Jesmyn ask the question: why? And as she began to write about the experience of living through all the dying, she realised the truth - and it took her breath away. Her brother and her friends all died because of who they were and where they were from, because they lived with a history of racism and economic struggle that fostered drug addiction and the dissolution of family and relationships. Jesmyn says the answer was so obvious she felt stupid for not seeing it. But it nagged at her until she knew she had to write about her community, to write their stories and her own.

Jesmyn grew up in poverty in rural Mississippi. She writes powerfully about the pressures this brings, on the men who can do no right and the women who stand in for family in a society where the men are often absent. She bravely tells her story, revisiting the agonising losses of her only brother and her friends. As the sole member of her family to leave home and pursue higher education, she writes about this parallel American universe with the objectivity distance provides and the intimacy of utter familiarity. A brutal world rendered beautifully, Jesmyn Ward’s memoir will sit comfortably alongside Edwidge Danticat’s Brother, I'm Dying, Tobias Wolff's This Boy’s Life, and Maya Angelou’s I Know Why the Caged Bird Sings.

"A brutal, moving memoir.... Anyone who emerges from America’s Black working-class youth with words as fine as Ward’s deserves a hearing." (Guardian)

"When I first read her memoir, Men We Reaped - about five young black men, all of whom died within a span of four years in her life - I understood the weight of grief as one struggles to live.... She is a modern-day William Faulkner, painting tapestries of an America that has not been heard." (Lee Daniels, Oscar-nominated director and producer)

"Raw, beautiful and dangerous [...] Ward's singular voice and her full embrace of her anger and sorrow set this work apart from those that have trodden similar ground." (New York Times Book Review)

What listeners say about Men We Reaped

I had to DNF this fairly early because it hit off one of my sensitive points.

If a baby is born multiple months premature, the doctors are not being rude to tell the parents that her chances of survival are slim, and that if she does survive she will likely face significant challenges.

The doctor is not being rude to tell that information to the parents rather than to the baby.

And most of all. To suggest that a baby who does survive those incredible challenges unscathed did so because she was "strong" and "a fighter" and because her parents loved her is INCREDIBLY rude to the babies who don't, and to their parents.