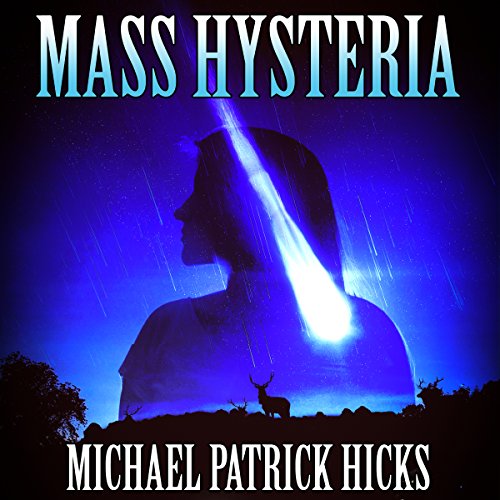 By: Michael Patrick Hicks
Narrated by: Joe Hempel
Try for £0.00

Something virulent. Something evil. Something new. And it is infecting the town of Falls Breath.

Carried to Earth in a freak meteor shower, an alien virus has infected the animals. Pets and wildlife have turned rabid, attacking without warning. Dogs and cats terrorize their owners, while deer and wolves from the neighboring woods hunt in packs, stalking and killing their human prey without mercy.

As the town comes under siege, Lauren searches for her boyfriend, while her policeman father fights to restore some semblance of order against a threat unlike anything he has seen before. The Natural Order has been upended completely, and nowhere is safe.

Soon, the city will find itself in the grips of mass hysteria.

To survive, humanity will have to fight tooth and nail.

Mass Hysteria contains graphic content and is recommended for listeners of extreme horror.

What listeners say about Mass Hysteria

Here is a twist on the many, many zombie novels out there.  Instead of humans being infected; it is the animals – all of them, dogs, cats, even cuddly rabbits and birds.  Nowhere is safe as the creatures come after every person, from everywhere.  Housepets are the most dangerous as they quickly attack and kill their owners.  Run into the woods and you’ll be attacked by squirrels, deer, and wolves, into the streets and the birds overhead will peck out your eyes.  It is indeed mayhem.

The story follows Lauren as she searches for her boyfriend through the horrors of a collapsing world.  Another twist on the story, which I won’t reveal here, gives the humans a strange and horrific means of survival.  Humanity as they knew it is gone, replaced by something, well, different.  But survival is survival and Hicks definitely knows how to weave a horror story.  Ride the roller coaster and be rewarded for your effort at the end.

Joe Hempel performs the story.  He is well experienced with horror stories and delivers with his familiar and professional voice.  He is one of those performers who doesn’t get in the way of the story, understated and comfortable, with easily discernible character voices.  The production quality is excellent as one would expect from a seasoned pro.

If you like your horror bloody and strange, you are in the right place.  Mass Hysteria is a unique twist in a crowded field.  Definitely not for the squeamish or easily offended.  It is a kind of kitchen sink of horror, blood, sex and evil, but hey, why not.  Call me sick (you’ll know why when you finish), but I loved the ending.  For horror fans looking for something different, well worth a listen.

Audiobook was provided for review by the author.

Please find this complete review and many others at my review blog.

As a life long animal lover, this was a truly horrifying concept and execution. I kept glancing towards my little dog as I was listening....

An alien life-source infects the animals of Falls Breath, causing them to viciously attack humans. But aren't humans animals, too? The residents of Falls Breath will soon find out...

Joe Hempel delivers fantastic narration as always. I would recommend this book to anyone who enjoys a gory horror story!

Not for the faint of heart or weak stomach!

Mass Hysteria by Micheal Hicks was one of those audiobooks that I did enjoy but I was shocked by the turn of events in the Apocalypse. I really do not like spoiling audiobooks in my reviews but this while being a good and interesting book is not for the faint of heart or weak of stomach as my headline reads. The world experienced a rare meteor shower and everything changes. All animals become savage attacking each other and people. And eventually, people change as well. I did enjoy this book and do recommend it.

The narration is done by the always amazing Joe Hempel. What can be said about Mr. Hempel other that he is just one of the best in the business due to the fact he is consistent with his characters and the fact he delivers top-notch performance in all that he does.

This review copy audiobook was provided by the author/narrator/publisher free of charge via Audiobook Boom for an unbiased review.

I really enjoyed this book and how the author wasn't afraid to be a little gruesome at times. I enjoy books like this that are dark and scary and where you don't know what will happen next. The narration was done really well too!

Not an easy read or for the faint of heart

Reminiscent of &quot;Zoo&quot; by James Patterson &amp; Michael Ledwidge, meteors hit the earth and bring with them an alien virus that spreads quickly. First to the animals, who become vicious and begin killing humans as well as each other in graphically violent ways. But, as you would think, being attacked by the animals does not transmit the disease, it just takes a few more hours for humans to begin killing and eating each other. Most of the characters get killed off throughout the book, leaving only two women from the beginning of the story to the end. How humans deal with their new world is frightening.

This was a hard story to keep listening to because of the graphic descriptions of the violence. One character in particular has a horrible back story to begin with, but it is told so you will understand why he so easily succumbs to the virus and the horrible things he does as a result. Definitely not for everyone. Many people will find this just to gross and may not be able to finish this book.

Overall, it was well written and there was character development through backstories. I don't know that I could listen to this again, but what kept me going was Joe Hempel's fantastic narration. He is a master in this genre, keeping tension, fear, and even disgust in his voices at times.

A one hour short story follows that is just as graphically creepy.

This was pretty gritty and intense. A great fast paced horror. Really graphic so be warned about that.

Joe Hempel as always does an amazing job. He was a perfect choice for this book.

The Zoo but MUCH darker and more visceral

This was a lot like The Zoo, by James Patterson except bloodier and WAY more intense. This book paints a dark and horrific picture of humanity in the grips of an apocalypse. It was no surprise that Joe Hempel was a masterful choice as narrator. His dynamic style, coupled with a well written and visceral story make for an easy choice for a credit.

Hitchcock's the birds on a global and multi species scale

Hitchcock's the birds on a global and multi specie scale. The story was wonderfully written and Hempel's narration as always was spot on awesome and engaging. So why a four for story? There are some really odd the wall sexual scenes that didn't need to be so detailed (in my opinion) I like to listen to audiobooks while driving as well as around the house on a Bluetooth speaker while doing chores...this was a headphone only, only when by myself and windows up at the stop lights kind of book. That being said the whole concept of the book itself was awesome and highly entertaining. The last hour is a short story of lovecraftian nature called consumption that by itself would be worth the purchase of the book. That was one hell of an awesome short story! Highly recommend the book as a whole just not for kids to listen to. I was voluntarily provided this free review copy audiobook by the author, narrator, or publisher.

This book should definitely come with an extreme warning label, lol. No, seriously the story (stories) are extremely brutal, explicit depiction of violence..and violent sex. From the book's description I wasn't completely expecting the level of brutality I found within. Note, I've read plenty of other authors who can be a bit extreme. I don't have a major issue with it, as long as it serves the story. My problem with Mass Hysteria was that by the end there was no 'hero', no character to identify with. The start was great, intriguing premise, gut busting action, really grabs you, but as I said by the end I just didn't like anyone, of course that may have been Mr. Hicks' intention. It just left me unsatisfied. Included in the book is a short an interesting short story, again also brutal, about a dinner party. I must say for some reason it left me with a Lovecraftian feel, not necessarily a bad thing at all, lol, but again I also wasn't completely satisfied with the story. This is the first time I've experienced any of Mr. Hicks work and I'm not sure how I feel. If I read more of his work, at least the next time I'll know what to expect going in.

Narration was done by Joe Hempel, and as always he delivers a solid narration. Joe has kind of a soft spoken/understated delivery which I think actually works tremendously well with this book. That understated delivery somehow makes the story that much more disturbing. Seriously, the combination of Joe's delivery and Hick's descriptions can really creep you out, which is what I think you want in a book like this.

watch out for the deer

When a meteor splashes down near town it makes big news, what comes after tears the town apart. Animals go nuts and attack owners, than people change and not for the better, but can some survive and what does it take to survive the Mass Hysteria.

This is another awesome book by author Michael Patrick Hicks and even better collaboration with voice actor and narrator Joe Hempel. They both have a way with the action, suspense, and the great characters. They make such a good team on these wonderful books just watch out for the deer.