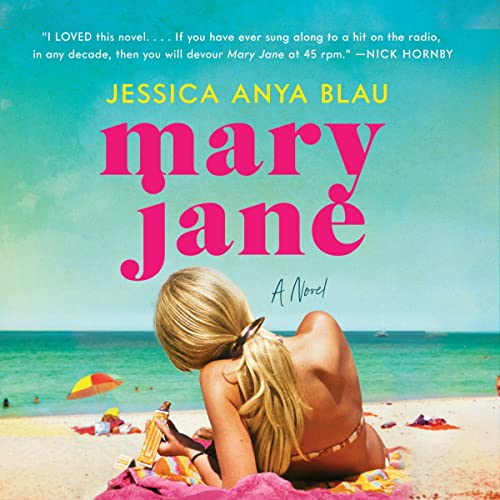 By: Jessica Anya Blau
Narrated by: Caitlin Kinnunen
Try for £0.00

"The best book of the summer." (InStyle)

"I LOVED this novel.... If you have ever sung along to a hit on the radio, in any decade, then you will devour Mary Jane at 45 rpm." (Nick Hornby)

Almost Famous meets Daisy Jones & The Six in this "delightful" (New York Times Book Review) novel about a 14-year-old girl’s coming of age in 1970s Baltimore, caught between her straight-laced family and the progressive family she nannies for - who happen to be secretly hiding a famous rock star and his movie star wife for the summer.

In 1970s Baltimore, 14-year-old Mary Jane loves cooking with her mother, singing in her church choir, and enjoying her family’s subscription to the Broadway Showtunes of the Month record club. Shy, quiet, and bookish, she’s glad when she lands a summer job as a nanny for the daughter of a local doctor. A respectable job, Mary Jane’s mother says. In a respectable house.

The house may look respectable on the outside, but inside it’s a literal and figurative mess: clutter on every surface, Impeachment: Now More Than Ever bumper stickers on the doors, cereal and takeout for dinner. And even more troublesome (were Mary Jane’s mother to know, which she does not): the doctor is a psychiatrist who has cleared his summer for one important job - helping a famous rock star dry out. A week after Mary Jane starts, the rock star and his movie star wife move in.

Over the course of the summer, Mary Jane introduces her new household to crisply ironed clothes and a family dinner schedule, and has a front-row seat to a liberal world of sex, drugs, and rock and roll (not to mention group therapy). Caught between the lifestyle she’s always known and the future she’s only just realized is possible, Mary Jane will arrive at September with a new idea about what she wants out of life, and what kind of person she’s going to be.

What listeners say about Mary Jane

An easy listening read, that makes you feel good! The story was a little far fetched in places, but I think it added to the charm.

So heartwarming and enjoyable

A great listen. Heartwarming, funny, feel good. I feel like a better person for having met Mary Jane 🥰

They say you should never judge a book by its cover and unfortunately with this one I did.

The cover was giving me very much 'Taylor Jenkins Reid' vibes and I went into this following listening to Malibu Rising.
I just did not enjoy it at all and found myself constantly coming away from it and not wanting to return.

The story just did not grip me at all

My first listen to a book by this author and I can barely wait for my next credit so I can listen to another. A fabulous listen, great storytelling, great performances, the first “child’s voice” I have heard and not cringed, highly recommended.

I loved this book. I'd recommend to listen to the audible version because there are a few songs that would be good to hear. Great narration.

Wow what a book, best I’ve read (listened too!) in a long time. You’ll fall in love with Mary Jane. Perfect narration too, again probably the best I’ve heard on Audible.

Great reminder of the 70s

Really loved this book. Growing up in the same era. The story brings a warm feeling inside and total empathy for the young girl breaking away from her strict life, finding out how to live and think freely... with the help from some friends.

I don’t usually write review on audible but because the narrator was also doing a child’s voice, I feel like other listeners should be aware. I work with children and I think that’s why I loathe audio books with adults narrating a child’s parts in the story.

I would say this was the least annoying “child voice” I had ever come across. It is whiny but i think that’s intended in the story and not an assumption the narrator.

I enjoyed listening to the book during my commute. It was an easy listen. I even listened at the gym which I haven’t done with any other of my audible books.

Addiction, the sexual revolution, women's liberation, ongoing civil rights-- topics that were brought to national attention in the seventies--are reduced to shallow soap opera vignettes in Mary Jane. If you're looking for a glossy account of how we were, Blau delivers, ala sit com snapshots.
The characters are entitled, making it challenging to emphasize with their self absorbed lives. Stereotypes of exotic hippies, juxtaposed with staid conservatives are delineated in hackneyed simplicity.
This is a sentimental romp through a time of dizzying cultural and political relevance. Pure, shallow entertainment.

I can’t tell you how happy this book made me...it did not hit one wrong note for me, from the story line to the characters and dialogue to the performance, just so enjoyable from start to finish. I found myself smiling throughout while listening.
It was extra special in that I have lived in all of the locales mentioned in the story so it was so easy to immerse myself in the story. I was slightly younger than Mary Jane was in 1975 but the scenes were just so familiar.
Even if you didn’t grow up in the 70s, the story will resonate with anybody who can still reach out and touch the memories and feelings of being an adolescent and struggling to figure out who you are, separate from your parents and having questions about growing up and sex and love but not knowing how to find the answers. I don’t think there is anyone who reads this who won’t wish they had a Mary Jane summer at 14!
I can imagine that this will be a book I pick up again whenever I need a pick me up and a taste of nostalgia.
Kudos to Caitlin Kinnunen, she is awesome!

Love me some Mary Jane

I'm a suckered for a coming of age story but this may be my favorite so far. So well written that I felt like I was in the home with the characters as young Mary Jane was enlightened and blossomed in openminded Cohen household. I would love to see this book take to the screen someday.

I see that some reviews said this book is “boring” or just “meh”. The energy from the 1970s was very different from now. No cell phones so more direct conversations with people. Mary Jane (her name is even outdated for the 70s) shows what was really going on during this time. The “hippies” of the 60s were now adults in the sense that they had to make their own way, no more Mom and Dad who would help. There were two different value systems and this book clearly defines them. It’s more of a memoir written by the fictitious Mary Jane than a novel. If it is read or listened to in this spirit, it could never be boring. Kudos for the name dropping of some of the greatest musicians/singers/songwriters of the time…many still relevant to budding musicians of today.

It started out cute and interesting and the performance was excellent. But then it was the same mundane thing over and over and over again. It never seemed to go anywhere. I DNF. Couldn’t take it any longer.

The narrator is a performer! Never sounded like she was just reading. Her voices were perfect for the characters.

The story is delightful - the characters are well developed and described wonderfully. Lovely balance between the sad parts and the happy parts. At the end of the book I felt happy and lighthearted. LOVED that the audible version ends with the actual song described.
Fun, easy read. If you need a break from some heavy reads, try this one. It’s fun without insulting your intelligence.

I loved this book !

I literally laughed out loud listening to this book. Caitlin did an excellent job. Would definitely recommend

This book is immediately engaging and has a lovable protagonist. The rest of the characters as well as the plot are original and smart. A joy from beginning to end.

Fun but not much substance

Nice coming of age story but not much to kee
Me interested. Had to work at it.