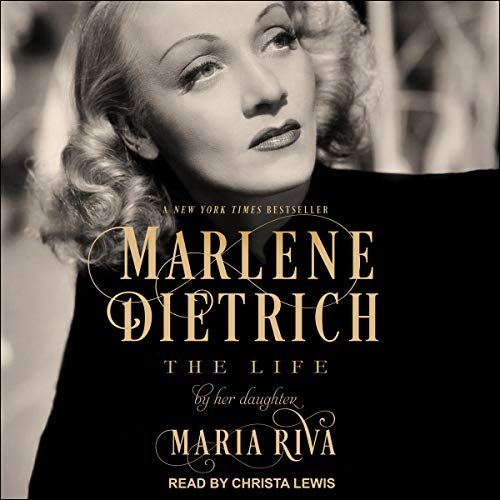 By: Maria Riva
Narrated by: Christa Lewis
Try for £0.00

With intimate detail, author Maria Riva reveals the rich life of her mother, Marlene Dietrich, the charismatic star of stage and screen whose career spanned much of the 20th century. Opening with Dietrich's childhood in Schöneberg, Riva's biography introduces us to an energetic, disciplined, and ambitious young actress whose own mother equated show business with a world of vagabonds and thieves.

Dietrich would quickly rise to stardom on the Berlin stage in the 1920s with her sharp wit and bisexual mystique, and wearing the top hat and tails that revolutionized our concept of beauty and femininity. She comes alive in these pages in all her incarnations: muse, collaborator, bona fide movie star, box-office poison, lover, wife, and mother.

During World War II, Dietrich would stand up to the Nazis and galvanize American troops, eventually earning the Congressional Medal of Freedom. There were her artistic relationships with Josef von Sternberg (The Blue Angel, Morocco, Shanghai Express), Colette, Erich Maria Remarque, Noël Coward, and Cole Porter, as well as her heady romances. And in her final years, Dietrich would make herself visibly invisible, devoting herself to the immortality of her legend.

What listeners say about Marlene Dietrich

Dietrich's life from her Teutonic beginnings to her lonely, reclusive death is told in unflinching detail by her handmaiden daughter. The story is a study in fame and power and cruelty. Several times I needed to stop and think. Maria Riva is a great writer as she lifts the lid on Dietrich's 90 year legacy.

I wasn’t sure given the length but I was completely hooked and couldn’t stop listening. It is a compelling and honest insight into the life and trials of a legend. It is not a “mommie dearest” but an honest account of a loving but flawed relationship and having had the book for years I’m so glad to have finally listened to it. Brilliantly narrated and makes you appreciate the star system even more.

quit amazing the recall details, I think I might listen again as so much information to take in.

I listen to many biographies but this is by far the very best.

I especially loved the performance but also how well the story was told.

What an amazing book. Beautifully written and performed.
Because of dairies and letters, the details of this remembrance by Marlene’s daughter Maria surely is the finest Hollywood biography ever.

Intelligently composed analysis of an artist and their context within a defining era of cinema history and informed direct testimonies: Brilliant.

Well worth a listen

Written with equal parts humour, love, sorrow and frankness, and such detail, I found this book thoroughly interesting. The narrator really bought the people in the book to life.

One of the best biographies of a Hollywood Great I’ve ever listened to. Unflinching and honest about her mother’s flaws yet told with love and appreciation.

Whether or not you are a fan, this is a fascinating book! Riva writes beautifully and paints a scene so vividly you feel that you are there. Highly recommend!

Very in-depth biography of Ms. Dietrich. Eye opening and heartbreaking to hear how much her daughter endured. So engrossing it was hard to turn off

A riveting story from beginning to end

Wow. I finished this book a month ago and I still think about it. Maria Riva is a gifted storyteller, and she might be an actual saint. I didn’t know anything about Marlene Dietrich but I felt like o was walking with Maria throughout her life. She paints a picture of pre and post World War Two Europe and Hollywood in a way that I hadn’t heard before. The performance was terrific too, so much so that I’m about to look up more books that Christa Lewis has narrated and get them. Spend a credit on this book. It’s so worth it.

I mean wow! This book by Maria Riva is startling in it's length, depth and insights. Beautifully written as well. For such subject matter finding the right narrator is so difficult and Christa Lewis does and AMAZING job.

Maria's book tells multiple stories woven into one: Dietrich's career, surrounding culture and history (notably WW1 & WW2), and Maria's story. The filmography and history is very interesting, but what makes this an excellent book to me is Maria's story. I was particularly compelled by Maria's conveying her complicated experience of her mother as an adult. Maria conveyed so well the struggle of having a complicated (I would say Narcissistic Personality, although to be clear Maria never labeled her mother as such) parent, and the experience of loving, despising, admiring, fearing, hating, and feel great compassion for that complicated parent. Frankly, as someone with a complicated parent, I found Maria's writing especially touching and compelling.

As a reader I really admired Dietrich's many strengths and achievements, hated her cruelty, pitied her shallowness, and felt empathy for Maria, and admired Maria's strengths. Maria's story feels honest. I walk away both admiring and despising Dietrich, the legend. I also got a few history lessons, which were very well written and I'll be likely to remember!

The narrator did a superb job as well. Overall a very good listen.

Not only probably the best biography of a Hollywood star but a biography of the 20th century. How things moved, felt and how it all ultimately falls apart. Sad and beautiful. Only someone who lived it could bring this story to life as Maria Riva did and does.

What a Character, What a Saintly Patient & Intelligent Daughter

Maria Riva deserves not only a Medal of Honor for surviving her self-absorbed, tornado-of-destruction of a mother, but also should be lauded for her incredible talent as a writer. Throughout the highly-entertaining book, I found myself wanting to jot down some of her beautifully worded prose, to revisit and soak in at a later time.

More than anything, I was impressed with Riva’s keen, razor-sharp sense of humor and appreciation of the absurd - both qualities she clearly inherited from her mother. Riva’s, however, is manifested with humanity and class, without the cruel, downright meanness (and lack of respect and graciousness) of the vapid legend.

Excellent audio performance on this one, as well. The actor really captured the tone and personalities of both mother and daughter. Highly recommended!. Please write more, Ms. Riva!

Wow Marlene was a savage!

I love listening to stories of strong women even when their personalities agree with mine. Love the way this one was written as well as the narration being superbly engaging!

The reader gave a terrific performance, imitating Dietrich when quoted, which is often. Most of the time it’s a very humane reading of the daughter’s words. The reader was a pro. There are a lot of famous people’s names in a variety of languages and she pronounced them all correctly, which is rare in Hollywood biography audiobooks these days.

Not Mommy Dearest and About More than Dietrich

A few years before I was born, Christina Crawford published “Mommy Dearest”. As a very young girl, I watched the movie and my takeaway was not average. Although the name Joan Crawford meant nothing to me, I felt sympathy for the deceased Crawford that her daughter had written something from which such a scathing review of her life could be fashioned. As an adult, part of me was curious to read the book to see how many liberties may have been taken in production. When push came to shove, I did not want to support the book in any way, shape, or form.

This formative encounter led to a general moratorium on Old Hollywood biographies. I wanted to read it from the source and read only autobiographies and memoirs. Of the 52 I’ve read, 50 are ghost written and/or riddled with lies; not my assessment but objectively measured. Marlene Dietrich and Zsa Zsa Gabor’s publications stand out as even conflicting themselves in many places.

Dietrich interested me but the drive to cement her legend was evident in written works. Also evident in these publications was Dietrich’s unique worldview and high intelligence; not quite as intelligent as she fancied herself but certainly more intelligent than peers. I wanted to learn more about Dietrich, but I did not trust her so researched reading my first biography.

Maria Riva’s was repeatedly listed as the best so I bought it, but then the cover noted Riva’s Dietrich’s daughter. Was this another daughter of Hollywood’s hit piece on her mother? Argh. Long story, short, the book is so insightful and well-written that I ended up with a hardcover copy and the audiobook.

My aunt is Joanne Woodward famous, not Marlene Dietrich famous but famous all the same. I am her niece, not her daughter and it’s bizarre. Does it have its benefits? Absolutely. But for those of us who become invisible in their presence, it’s bizarre. One simply cannot explain what it’s like to be constantly interrupted by fans when trying to have a conversation, then have the celebrity turn focus to strangers. They excel at transitioning in and out of their public and private selves. For most of us, it’s jarring to face constant interruptions and then pick up wherever we left off. When we are not being interrupted, there’s bound to be an eavesdropper or not so subtle “secret” photographs being snapped. Most people do not have any sympathy for those of us who become invisible in the presence of a famous relative, but they would if they could understand the trade off.

Riva does an incredible job of articulating the trade off and describing the toll it takes on the invisible ones within a bright star’s orbit. Moreover, the unacknowledged toll it takes on the star. They pay the price but, if lucky, might be so self-involved as to not realize the sacrifice a la Dietrich.

Far from a hit piece on her mother, Riva’s biography offers a fair telling of her life with Dietrich. I could not help but picture Riva as Roald Dahl’s “Matilda,” wise beyond her years in managing parents with intense, depleting personalities. The dominant emotions I pick up from Riva for her parents are pity and love in that order. There’s no hatefulness or punitive energy. The biography was not written as a response to being written out of a Will as are so many tell-all’s. Writing the book was, one hopes after connecting with Riva’s experience, a cathartic experience. Dietrich was a tough broad but Riva is tougher.

Even if a reader does not have sufficient interest in Dietrich to read a 700+ page book, Riva’s biography should be required reading for anyone interested in the studio system of Hollywood’s Golden Age and history of cinema; a window into a life and career that spanned the entire in 20th century.

Although the audiobook is read beautifully and a gift when my eyes get tired from reading, the hardcover contains compelling images worth a peek.
Long story, longer - I am glad to have inadvertently overcome my moratorium on biographies as I gleaned a great deal from Riva.