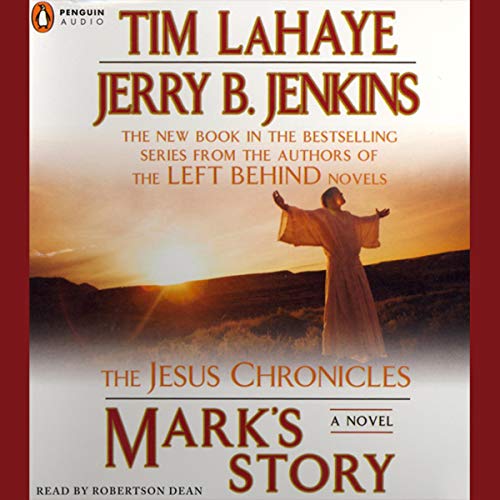 By: Tim LaHaye,Jerry B. Jenkins
Narrated by: Roberston Dean
Try for £0.00

Mark's Story opens on the evening of the last day of Jesus as man. The young Mark hears Jesus' prophecies of the events that are to come, and bears witness to some of the most pivotal events in human history, including Judas Iscariot's betrayal, Peter's denial of his Master, and Jesus' crucifixion, and resurrection as the risen Lord.

In the years after, following in the footsteps of his friend and mentor Peter, Mark becomes an ardent follower of Jesus and a devoted disciple of Christianity, spreading the Word beyond Jerusalem and into the world. Mark urges Peter to recount to him the stories of Jesus' life on Earth, His messages, His miracles, and His everlasting promises to His people, and compiles what becomes canonized as the Gospel of Mark.

Mark chronicles the growth of the early Christian church, the struggles of Jesus' followers, and the persecution they endured from a hostile world. Mark's Story is a thrilling account that vividly depicts the last day before Jesus' crucifixion and the danger that early believers faced as they boldly proclaimed Jesus as Christ the Lord. Their bravery laid the foundation for the early church, and their fervent passion for the Word reverberates throughout the world today.

What listeners say about Mark's Story

Listen while it is still Today

Thank you Tim for being so sensitive to this most amazing story of all... bringing it to life for all to witness the absolute truth... so sensitively read... there is an urgency to hear and obey God's calling.. amen

This was a very interesting and exciting look at John Mark. I had to listen twice and I'm sure probably a third time. Highly recommend!

Great way to hear the new testament in a new way

The authors add a bit of historical fiction, but mainly rearrange the letters and gospels from the new testament in a way that makes them come alive, and helped me understand them in a new way. Great book!

I have just finished Mark's Story of The Jesus Chronicles. I have never listened to a more thrilling and heart-rending story of the life of Jesus and His early followers. Many interesting facts come to light that I have always wondered about in the lives of Peter, Paul and John Mark.
Thank you Audible and authors Lahaye and Jenkins
Sincerely, Sandra Carey, Rancho Santa Fe, CA

Great story. I love the way this author writes and have read several of his books in the Left Behind series. Getting ready to read the third book in this series.

I have listened to this book twice now. I have learned even more than the first time.

I'm well studied in the bible but this series still left me in awe. it's a history on the four writers of the gospels, along with acts revelations, probably first and second Peter. tells the history then ends with the actual book or books penned by John Mark, John, Luke and Matthew

The Tim LaHaye and Jerry Jenkins audio book of the four Gospels and possible background of the inspired writers of those books brings the Gospels to life and lets the listener realize the Gospels were written by real people about a very real SON of MAN WHO was also the SON of GOD! The narrator was also excellent in his reading.