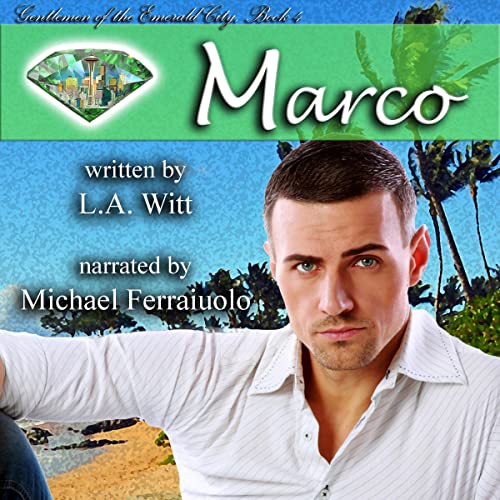 An invite to a lavish destination wedding? Sign me up. Except half of the couple is BFFs with my ex. My ex, who’s going to be there with his new arm candy. UGH.

Maybe he’ll realize what he gave up once he sees me with a hot new boyfriend of my own.

He just doesn’t need to know I hired that hot new boyfriend.

Getting paid to spend two weeks in Maui and on a cruise? Twist my arm. Shame the dude who hired me is a train wreck with an ego. If he doesn’t knock it off, I might start charging him extra just to put up with him.

Except maybe he’s not so bad. In fact, if I distract him enough from his ex, he’s actually kind of fun. And hot. But there he goes again, ranting about his ex.

Bet if I clapped a hand over his mouth, he’d shut up.

Gentlemen of the Emerald City

Marco is book four of Gentlemen of the Emerald City, a sexy series centered around the high-class, high-dollar Gentlemen of Seattle’s most exclusive escort service. Each book is full of snark, sass, and sweetness, and like any Emerald City client, you’re guaranteed a happy ending.

What listeners say about Marco

I did enjoy this book, but Julian went on and on about his ex for far too long, when said ex didn’t seem to have any redeeming qualities. I knocked a half star off for that. Otherwise, it was a good book for the genre.

A little drawn out

The other books in this series are almost insta love and heat. This one is more drawn out and the focus on the X boyfriend is a bit much. I was hoping for more heat and hot scenes. Michael Ferraiuolo did a great job with the narration and story telling.