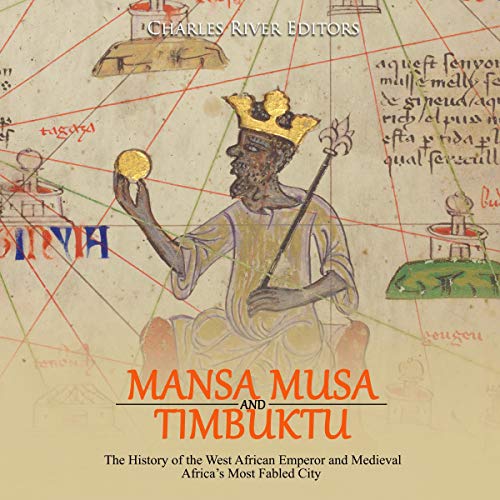 “From the far reaches of the Mediterranean Sea to the Indus River, the faithful approached the city of Mecca. All had the same objective: to worship together at the most sacred shrine of Islam, the Kaaba in Mecca. One such traveler was Mansa Musa, Sultan of Mali in Western Africa. Mansa Musa had prepared carefully for the long journey he and his attendants would take. He was determined to travel not only for his own religious fulfillment but also for recruiting teachers and leaders, so that his realms could learn more of the Prophet's teachings.” (Mahmud Kati, Chronicle of the Seeker)

Recent research has revealed that the richest person of all time lived in the 14th century in West Africa and went by many names, including Kankan Musa Keita, Emir of Melle, Lord of the Mines of Wangara, Conqueror of Ghanata, and the Lion of Mali II, but today he is usually referred to as Mansa Musa. Adjusting his wealth to modern values, he was worth about an estimated $400 billion as the Sultan of ancient Mali, which controlled the trade routes across the Sahara Desert.

About 6,000 years ago, the ancient Sahara was a tropical jungle with lush grasslands and substantial rivers until it moved north of the Equator as a result of tectonic plate movements. The seismic activity changed the location of land and the composition of the atmosphere.

By about 600 BCE, the terrain and habitat had become much less hospitable, so much so that it was no longer possible to use horses and oxen to carry commodities. As a result, trading became difficult and sporadic and slowly disappeared.

This all changed when camels were introduced to the Sahara, initially via Roman invaders and then by the Berber traders from Arabia moving across North Africa in search of gold and salt. As they reached southern Sahel, they encountered the old, established trading system and routes of the Garamantes, the people who handled the trade in and out of the Sahara from West Africa. The combination of the use of camels with the re-established West African trade routes brought about rapid economic progress that resulted in the area supplying more than half the world’s gold for more than a thousand years, beginning around 400 CE. Of course, this timing coincided with the rise of global trade routes such as the Silk Road and the beginning of Europe’s Age of Discovery.

The belief in the existence of fabled African kingdoms and kings ensured that real African kings were also shrouded in lore, and few would become as legendary as Mansa Musa.

What listeners say about Mansa Musa and Timbuktu

It was an educational listen, what dampened it for me was that a person from a black / mainly African background was not selected to narrate this audio book, if one had been selected, it would have added more authenticity/ enjoyment to the listening of this audio book for me. I feel that this would also be the case for other Afro Caribbean listeners. Aside from my one criticism, I enjoyed the audio book.

Few people know or appreciate any pre-slave trade history of Africa. One of the most compelling is that of Mansa Musa, the man now widely reckoned to have been the richest man who ever lived and whose exploits in largesse transformed international trade and impacted the global economy, resonating for years after. This book explains the social, economic and political importance of Musas reign and how this manifests or compares to present day Mali. Compelling read, mildly spoilt by irritating and unnecessary faux African accents used by the narrator in parts.

This reads like someone just copied the cliff notes from Wikipedia. Just random tidbits with no cohesive groups of info. The reader also doesn’t know how to pronounce the names and places properly. Do not waist your money or points on this. Should be free if anything.

Black people did that ...

This book is a much-needed corrective to pernicious narratives about the relative contributions of black Africans to the world’s intellectual repository. It is both timely and well-done.

For a narrator of history...the least you can do is get the name of the places and people correctly!!!!!
The pronunciation of Sundjata Keita or the University of Sankore and many other people and places... was Horrible!!! If I didn't have some knowledge of this history, I would have missed some important info based on how the narrator was saying these names.

Should’ve been a 2 star podcast

This reading should've been a 2-star FREE podcast.

The book lacks depth in analysis, information and historical facts. It barely said anything about Mansa Musa and Timbuktu.

The narrator should consider his choice of tone of voice when reading quotes. They were comical.

A good listen that never stood still for too long and yet is filled with relevant and little known information that I could follow. I can't wait to listen to it again.

The book was informative. The narrator misprounced a variety of words. For example, he repeatedly pronounced "Guinea" as "Guyana." For a scholarly work to have such an ignorant reader is quite a shame.

Not quite sure what voices that guy was going for?

great information, but weird reading styles...
not sure why he was trying to do a Sea Captain's voice at first with any switch to a dry English professor. The information was pretty good though!

I wouldn't be surprised if due to white washing / destruction of African history by Europeans, there wasn't as much historical material to use for this book. I was fascinated by the character but I didn't think there was a lot of development or anecdotes of who Mansa Musa was. Worth a quick listen but didn't satiate me. Narrator didn't engage me but hey, this is a history book so I'm not expecting Shakespeare

Rich with information not largely available or circulated, this short book sheds new light on the cultural and academic contribution of Africa. I would have liked a longer "listen" giving more time spent on some of the facts and dates that were presented in rapid fire, however this does not take away from the overall presentation. It's a good listen.