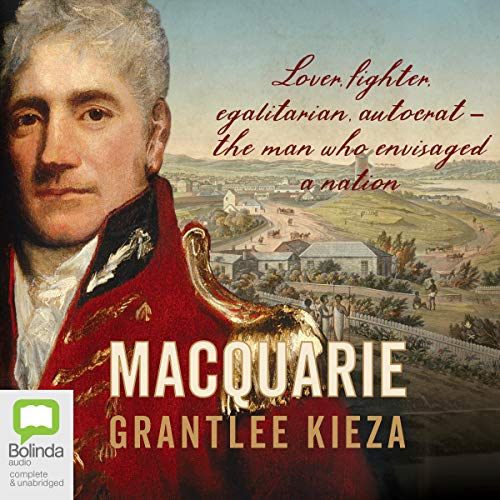 Lachlan Macquarie is credited with shaping Australia's destiny, transforming a harsh, foreboding penal colony into an agricultural powerhouse and ultimately a prosperous society. He also helped shape Australia's national character. An egalitarian at heart, Macquarie saw boundless potential in Britain's refuse, and under his rule many former convicts went on to become successful administrators, land owners and businesspeople.

However, the governor's ambitions for the colony brought him into conflict with the continent's original landowners, and he was responsible for the deaths of Aboriginal men, women and children brutally killed in a military operation intended to create terror among local Indigenous people.

So was Macquarie the man who sowed the seeds of a new nation or a tyrant who destroyed Aboriginal resistance?

In this, the most comprehensive biography yet of this fascinating colonial governor, acclaimed biographer Grantlee Kieza draws on Macquarie's rich and detailed journals. Ultimately, Macquarie laid the foundations for a new nation, but, in the process, he played a part in the dispossession of the continent's first nations.

Lover, fighter, egalitarian, autocrat, Lachlan Macquarie is a complex and engaging character who first envisaged the nation we call Australia.

What listeners say about Macquarie

a fascinating story from poverty in Scotland to India and becoming Governor of Australia , a fascinating view of a slice of history through one man's view,