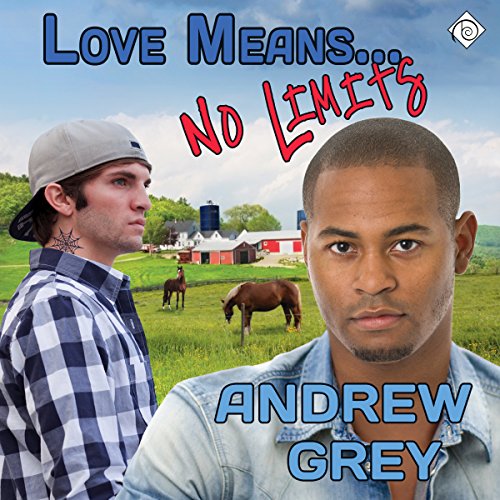 By: Andrew Grey
Narrated by: Andrew McFerrin
Try for £0.00

Bart van Andren, aka Spider, has been running away from life with a lot of chemical help. When he wakes up in a hospital, he discovers he's picked up a champion. Duane must see something in Bart no one else ever has, because he finds Bart a job at Laughton Farms, where the people show Bart kindness and patience. He might even kick his drug habit with a little help from his new friends Geoff, Eli, and especially Tyrone.

Tyrone Jackson works at the farm despite the disapproval of his traditional black family, who find it suspicious that he works with gay men. Tyrone knows he's gay, and until now, he's kept his home and work lives separate.

Though Tyrone resists his feelings for Bart as long as he can - he's seen enough of the drug culture to last a lifetime - he can't deny their attraction forever.

But before he and Bart reach for more than friendship, Tyrone has to face his family and Bart has to close the door on his past - a past that could put Tyrone, the farm, and everyone he's come to care for at risk.

What listeners say about Love Means... No Limits

This is the sixth volume in a series. I'd suggest that folks check out volume 1 and if they like that proceed through the books in order. Some will enjoy spending time with characters that soon become like old friends. Others will not care for these books. Individual mileage may vary.

The audio-book is narrated by Andrew McFerrin who does a credible job with the narration and with keeping the many character voices distinct although his "child being adorable" and "urban black delinquent" voices may rub some the wrong way.

Bartholomew van Andren is the son of wealthy Grand Rapids socialites. But Spider is the unhappy, drug addicted kid that is running from that all wealth and parents that seem too busy to care about their ne'er do well son. That is until Spider takes too many of the wrong pills and ends up in the community hospital. When he wakes up he discovers that he's been taken under the protection of Duane, a sheriff's deputy that thinks he may have just the way to turn the kid around. Spider, or Bart as they now insist on calling him soon finds himself mucking out stalls at Laughton Farms as the least senior hired hand on a horse farm run by Geoff Laughton and Eli Henninger two gay men that have a habit of adopting and rehabilitating stray gay youth. Bart is soon befriended by Tyrone Jackson who also works at the farm despite the disapproval of his traditional black family, who find it suspicious that he works with gay men. This is the sixth installment in Andrew Grey's Farm series and many of the characters are familiar from earlier books in the series. There is a definite wholesome, rural Midwestern vibe to these tales that appeal to some while driving others to distraction. The prose is workmanlike and the storytelling is solid if not scintillating.I liked it, I'm sure others will not. I suggest that if the premise sounds interesting, and the pace sounds appealing, you should check it out for yourself.

Loved the story, but not the narration

Yes, I actually know a few people who might actually be able to relate to the story, from both the perspectives of Bart and Tyrone.

He made Bart sound whiny and like a spoiled brat, rather than someone trying to overcome an addiction and neglectful family. It was like listening to Keanu Reeves, but specifically in Bill & Ted's Excellent Adventure, which kept breaking the otherwise great story.

This author writes books with a good, solid story, which are also warm and comforting, and very enjoyable. You will not be disappointed.

This story was really a 3.5 for me.
I like the fact that Spider when trying to rebuild his life he drops his nickname. I felt some things were just too easy. We see cravings but he's back on track pretty quick. Tyrone has always been a hard worker and cares for his family but it is filled with some rough characters. I feel bad for him but he is making a life for himself. I feel like he has great things in his future.