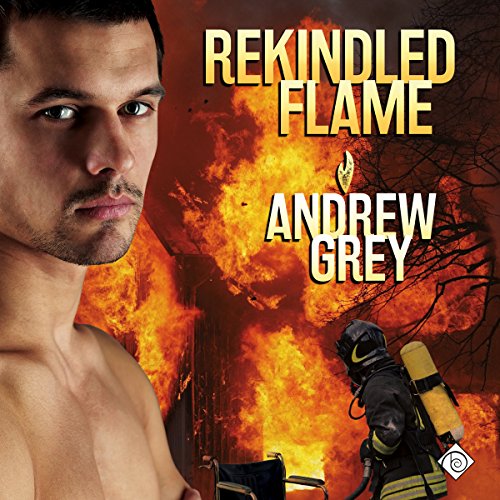 By: Andrew Grey
Narrated by: Michael Pauley
Try for £0.00

Firefighter Morgan has worked hard to build a home for himself after a nomadic childhood. When Morgan is called to a fire, he finds the family out front, but their tenant still inside. He rescues Richard Smalley, who turns out to be an old friend he hasn't seen in years and the one person he regretted leaving behind.

Richard has had a hard life. He served in the military, where he lost the use of his legs, and has been struggling to make his way since coming home. Now that he no longer has a place to live, Morgan takes him in, but when someone attempts to set fire to Morgan's house, they both become suspicious and wonder what's going on.

Years ago Morgan was gutted when he moved away, leaving Richard behind, so he's happy to pick things up where they left off. But now that Richard seems to be the target of an arsonist, he may not be the safest person to be around.

What listeners say about Rekindled Flame

Andrew Grey is wonderful for giving us both stories with a heart as well as characters who aren’t always “the norm”. I love his hurt/comfort books and Morgan and Richard’s story is full of all that and more.

I’m not a huge fan of second chance romances because I love that first meeting so much, but this was done really well.

Michael Pauley does a great job with the narration and is an easy voice to listen to as well as clearly understanding the use of pacing and emotion to help bring these guys to life for the listener.

Highly recommended for fans of the author, the narrator and fans of second chance/hurt/comfort romances – with fire fighters!

One of the best books I've listened to this year

Would you consider the audio edition of Rekindled Flame to be better than the print version?

I haven't read it. Knowing Andrew Grey books I imagine the book is just as good though Michael Pauly really did justice to bringing it to life.

Everything. I think that Morgan keeping the ring from his pretend wedding when they were thirteen really tugged at my heart.

Have you listened to any of Michael Pauley’s other performances before? How does this one compare?

Yes. Until September. I like this one so much more.

Yes and I did and am ready to listen to the next.

I am a big of Andrew Grey and this story was absolutely fabulous, but I think Michael Pauley made it smoke. (yes bad pun)
Richard was a marine and in a bad accident that made him lose his legs. He has bad PDSD and has given up on life

Trapped in a fire, Firefighter Morgan risks his life to rescue a trapped man in a wheelchair. He finds out later that Richard was his best friend when he was thirteen before his father took them away.
This is a great story of second chances. Also friends to lovers and of course you have hot men in uniforms.
I absolutely recommend this to everyone that likes a good MM romance. Michael Pauley makes this story even more sensual and sexy. There is a bit of mystery in the background as well.

No bodices to rip here but whatever the 'mo equivalent and enough steam to run any locomotive ever made! Oh... and even a puppy added for schmaltz...

Narration: Michael Pauley has an amazing voice. I thought he read a bit too fast and emphasized things a bit too much where it wasn’t called for, so I marked this down by 1 star for that. However, it didn’t ruin any of the listening for me. He brought the heat to the sex scenes and kept me pulled into the story. He also gave Angus a very good Scottish brogue (my favorite being married to a Scot! lol). I can’t wait for the rest!

Story: I’m a huge fan of Andrew Grey as a writer, but also a pretty nice guy. Yeah, I fangirled at EPC a couple of years ago! I’m always looking for more Carlisle stories! So this was a no-brainer for me. This book was the first in the series.

In this book, we meet firefighter, Morgan, and ex-military disabled vet, Richard. These two were friends as kids, but Morgan had to move away and they lost touch. Years later, and they’re both back where they started…kind of.

Morgan is now a firefighter. His character doesn’t come across as a danger junkie, but he’s the one that goes into a burning building to get the people out. He thinks he’s happy with just his job and friends, but figures out soon that he’s lonely. When he’s called out to a fire, the small family there says that there’s a guy still in the house. Morgan finds him in a wheelchair and carries him out. Later, off shift, he does his normal hospital visit to see anyone he’s rescued.

Richard was the man in the wheelchair. At first, Morgan doesn’t recognize him. But when he does, he offers Richard a place to live while he figures things out. Grey wrote Richard’s character very well in my opinion. He’s fighting his depression and the many losses he’s had over the last couple of years. He was military and paralyzed in an attack. He lost fellow soldiers, but he also lost his parents on the way home from seeing him. He really loses everything. He’s living with a family of a service member that died in his unit, but the house was attacked by an arsonist hell-bent on hurting military families.

The story grabbed me and didn’t let go, even at the end! I was cheering for these two from the moment Morgan realizes the guy in the hospital bed was his husband when they were thirteen. It has a great flow and the relationship builds at a good pace. There are some great hot scenes, but there’s also a good sub-plot going on with the arsonist. And I’m not wasting a minute before I start book 2!

love the way these men help each other out. good love sence and feel good talk.

I really like this new series so much! Richie and Morgan's story was so sweet! And it was so fun to see Agnus and Kevin!

it's one of this wow books

where should I start?
I actually loved this book, because it was very similar to my personal life story.
I know the struggles with the wheelchair in a daily basis..
i think Andrew did an amzing research on the subject as well is about the post trauma disorder..
I loved Richie so very much.. my heart went for each of his difficulties, every insecurity touched every corner of my soul
and loved Morgan as well.. I think that he his the dream man of every person ..
the affection he can give, the security he can master it's quite amazing.
the subject of the fires was good as well..
it made me hopeful abaut my life ..
and what can I say abaut Michael Pauley that I didn't say yet?
his the best narrator out in audible as far as I know, and I'm an audible addict..
I love Michael's voice so very much..

An enjoyable hurt/comfort romance mixed with a bit of mystery and suspense.

Firefighter Morgan never forgot his old friend Richard. They were both the first they told about their feelings for other boys, their first kiss, and first love. When Morgan pulls an unconscious ex-Marine in a wheelchair out from a burning house he never imagines it could be his old friend Richie.

Richie is in a dark place – after losing the use of this legs oversees and getting discharged from the Marines – it all has left him questioning what it is that he’s supposed to do. After the fire, right when he’s lost literally almost everything he owns, Morgan shows up and is determined to help him. With or without Richie’s approval.

What Richie needs is a good kick in the attitude and Morgan is more than happy to do it. They also need to figure out why and who is setting veterans’ houses on fire.

I enjoy Andrey Grey’s books because they’re usually very tender, emotional, and affectionate. While the ones I’ve read so far have been pretty low steam, I love the way Grey takes on characters living with disabilities like paraplegia, deafness, or blindness and how everyone gets a happy ending regardless of ableness.

Rekindled Flame is narrated by Michael Pauley. I liked his pacing, and how each character has a distinctive voice, with most characters having pretty straight-forward American accents, with the exception of Morgan’s friend, Angus, who has an interesting Scottish burr. The narration is easy to listen to and enjoyable.

Another great work by Andrew Grey. He never disappoints.
How do you rebuild a friendship and then more while trying to find your footing together, deal with PTSD, loss, an insane arsonist, and more?
The PTSD and its debilitating associated trauma was presented beautifully. The mystery aspect of the novel kept me guessing all the way through, which was a very nice surprise for a person known to solve these things early on in the book!
It was full of ups and downs, excitement and fear, and love and forgiveness. It is a book about excepting things that cannot be changed and loving yourself for who u are.