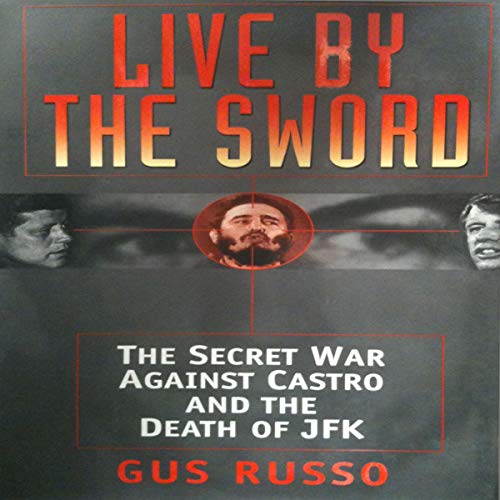 Live by the Sword: The Secret War Against Castro and the Death of JFK

By: Gus Russo
Narrated by: Paul E Silbermann
Try for £0.00

In this fascinating and masterful work of research, Gus Russo finally unmasks the hidden secrets that have surrounded the Kennedy assassination for 35 years.

Russo's audiobook is packed with never-before-seen documents and photographs, and never-before-known information - the result of tireless research and exhaustive interviews with countless key players in the Kennedy and Johnson Administrations.

When the Warren Commission released the statement that “Oswald acted alone with no clear motive”, it was clearly an inadequate explanation. For years, this conclusion, combined with official silence on the topic, encouraged professional doubters, or “Kennedy researchers”, to wonder if the government itself had some complicity in the crime.

But these skeptics were asking the wrong question.

The question never asked was not who killed JFK, but why he was killed. And the answer to this question is the reason for over 30 years of government coverups.

In Live by the Sword, Gus Russo attacks this very question. Guiding listener through the labyrinth of information and intrigue, he explores the assassination in context, explaining the atmosphere of the times as well as the actions that led, inexorably, to the defining moment of this generation.

This background prepares you for the stunning realization that is the core of this audiobook: The Kennedys' relentless pursuit of Castro and Cuba backfired in tragedy on that terrible day in November 1963.

An acclaimed investigative reporter and longtime student of the Kennedy presidency, author Gus Russo was one of the lead reporters on Frontline’s landmark 1993 documentary, “Who Was Lee Harvey Oswald?” Most recently, he served as chief investigative reporter for ABC’s Dangerous World: The Kennedy Years, hosted by Peter Jennings. He has assisted authors Gerald Posner, Seymour Hersh, and Anthony Summers with their books on Kennedy-related subjects, and has served as consultant to numerous network television specials, books, and magazine articles. For more than 20 years (and with no preconceived conclusions), Russo has sought to compile a credible account of President Kennedy’s assassination and the foreign policy errors that set the stage for it. Using first-time, on-the-record interviews, newly discovered photographs, and recently declassified U.S. government documents, he has crafted the definitive chronicle of a critical episode in American history.

What listeners say about Live by the Sword: The Secret War Against Castro and the Death of JFK

as a previous "patsy" believer I have to say that the painstaking research from the author has changed me into a more learned individual. the narrator was superb in getting the information across clearly & with losing any excitement. the Kennedy clan have achieved so much and its a shame that they have had some elements of their reputation tarnished by lies, cover ups & hollow denials. an excellent book THOROUGHLY RECOMMENDED

The story very complex but not what I had expected. After making a point he appears to make arguments against what he was trying to prove. But you get all very eye opening

Fills in more blanks than any other book on the subject

This book is over 500 pages of intensely detailed murder-mystery thriller. It’s not an unsupported “conspiracy” book but a meticulously researched takedown of most of the common whitewashing of the Kennedy brothers as well as the assassination of JFK. One thing that I feel sets this book apart is that it quotes JFK and RFK time and time again to demonstrate their obsession with invading Cuba and how it got JFK killed. The book took 20 years of research so it’s worth the money.