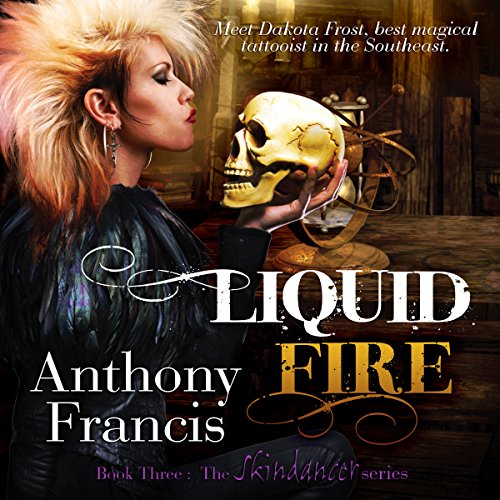 By: Anthony Francis
Narrated by: Traci Odom
Try for £0.00

Magical tattoo artist Dakota Frost is back - fighting a fire that may burn down the world.

For millennia, ancient factions of wizards have closely guarded the secrets of liquid fire - distilled from the blood of dragons and the magical key to unbelievably powerful spells.

Now, Dakota's flirtation with a fireweaver while visiting San Francisco engulfs her in a magical feud. Forced to defend herself with her masterwork, a powerful dragon tattoo, Dakota becomes the target of superstitious magicians who believe she's summoned the spirit of a dragon...the first step in an incredibly dangerous spell that could create more liquid fire.

Soon, Dakota finds herself caught in a magical battle between ageless wizards desperate to seize the rapidly dwindling supply of liquid fire and fireweaver terrorists who'll stop at nothing to keep every last drop of it for themselves...even if that means killing Dakota.

The race is on to find the truth about liquid fire, the secret behind Dakota's magic tattoos, and the message hidden in the fireweaver's secret codes - before the world goes up in flames.

What listeners say about Liquid Fire

Why was that book so long? Why do we have to learn so much about ever single freaking move of all these different martial arts? Seriously, she would go off about 2 step ,3 step ,basket weave blah blah blah. No idea what was happening. Every action scene I got lost. And I'm not dumb or unable to follow. It was just so badly written and self indulgent. Every step, like it was some kind of learning manual.

The narrator. I don't remember having any problems with her in the first two books, but this was pretty bad. She did the main characters well, but everyone else sounded like idiots. Literally. Like they were dumb. It was weird. Her accents were crap, all of them. Irish, Scottish, and a couple others were just grating. Then the climactic parts. Ummm, what the hell? She sounded like an over dramatic friend retelling a story while trying to be quiet. Dakota would be screaming and the narrator would do a weird over exaggerated whisper scream. I have an hour left of the book but had to turn it off. I don't even care what happens. I can't follow it.

I don't know what happened. I enjoyed the first two books, and this had some good parts. Overall, I don't think it's worth the time it takes to get through it or the frustration.

listening.. I. really liking this series.. I am sad that the.fourth book is still not here