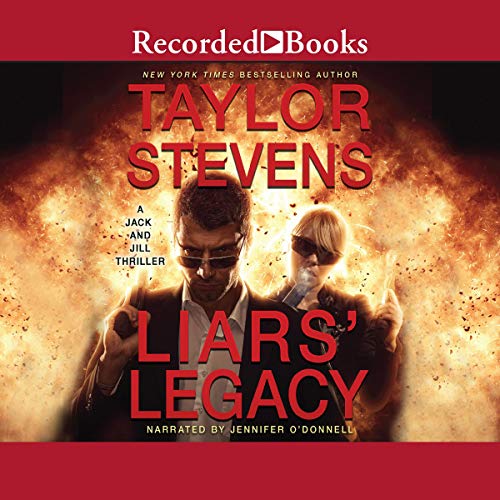 By: Taylor Stevens
Narrated by: Jennifer O'Donnell
Try for £0.00

They were born in the shadows. Schooled in espionage. Trained to move undetected and to kill without remorse. Elusive twins Jack and Jill take the global spy game to electric levels in this captivating masterwork from best-selling author Taylor Stevens.

The Broker is dead. The secret network he controlled has lost its restraints. From the darkest deep-state enclave to the farthest reaches of the planet, the world's deadliest assassins are now free to pursue their own agendas. The United States government, unwilling to risk upheaval and global chaos, has preemptively mobilized killers of its own to hunt down and terminate each threat. Among the most dangerous agents on this list are Jack and Jill.

Often estranged - always connected by their stark shared childhood - brother and sister have managed to elude both US intelligence and their foreign enemies, which makes them the perfect instruments of destruction for anyone who can control them. As the siblings board a plane to Berlin hoping to meet their father for the first time, they suspect a trap. What they can't predict is how far a high-level Russian operation will go to secure their skills, or how hard the US killers sent to stop them will fight to assassinate them first.

For the twins, resistance and cooperation both mean certain death. Caught between two superpowers with unlimited resources and unable to trust each other, brother and sister will match wit against skill in a life-threatening chase across Europe to the United States and will enter into an unholy alliance that could change the balance of global power forever.

What listeners say about Liars' Legacy

If you like thrillers with a good Dash of world politics on a broad stroke, non-traditional protagonists that aren’t strictly good handsome laugh out loud turns of phrase (facial whack-a-mole) you’ll like this. Definitely helps to have read the first one in the series although I don’t know that it’s required for understanding.

Once again she's knocked it out of the park! Love the story line; action all mixed with a little touch of humanity. can't wait for the next one.

I didn’t want it to end!

Really good. I don’t *think* you have to listen to book 1 to understand book 2, but you’ll enjoy it more if you do. For one, there’s not a lot of visual description of the characters in this one so your imagination has a lot of work to do if you didn’t read Liar’s Paradox first. I’m really enjoying the series. Travel, mystery, subterfuge, action, complex interpersonal relationships. It really has it all. There’s plenty of room left to keep the big overall story going.