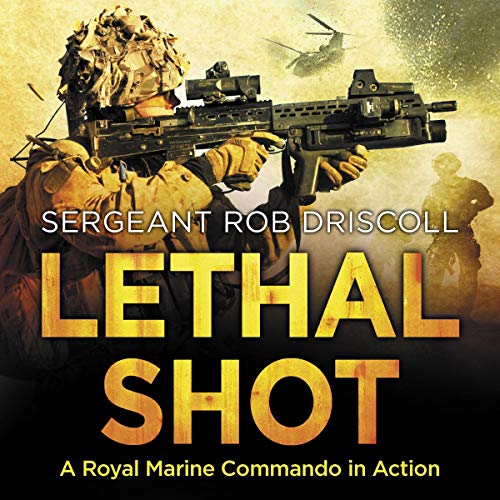 By: Robert Driscoll
Narrated by: Finlay Robertson
Try for £0.00

Rob Driscoll, former sergeant with 42 Commando, Royal Marines, served tours in Iraq, Kuwait and Kosovo. A born leader of fighting men, with the medals to prove it, he also endured three tours in Afghanistan. The third of those will go down in history as one of the UK military's darkest hours, for it marked the first time a British serviceman has been tried for a murder on the battlefield since the Second World War.

That man was Sergeant Alexander Blackman, Rob Driscoll's friend and fellow NCO in 42 Commando, and on the day in question they were commanding patrols within a few hundred yards of each other. Few men know what really went on that day in Helmand Province. Rob Driscoll is one. And in his book - with Blackman's blessing - he reveals all.

Yet Lethal Shot is more than a compelling insight into one of the most controversial rulings in recent military history. It is a clear-eyed account of life on active service with the Royal Marines, of incursions into war-torn countries where chaos and anarchy ruled - and of risking your life daily for politicians back home who won't support you.

In charting its author's career as a Royal Marine Commando, it unflinchingly demonstrates the real-life horrors of engaging at close quarters with enemies such as the Taliban - as well as the dangers that politics can bring to the ordinary fighting serviceman.

Sergeants Blackman and Driscoll were two sides of the same coin. One came home a hero, the other a wanted man. But for circumstance, it might have been the other way round.

What listeners say about Lethal Shot

I have been an Audible member for a number of years now and never written a review after finishing a book. This one I had to. The narrator is amazing on this book. I have listened to this book in under 2 days. I just could not stop listening. The start is a little slow given the title of the book but just remember this is the story of a man's life not an action film. When it gets going boy does it. I take my hat off Sgt Robert Driscoll for what he and his men endured. Very well written. Never has a book made me cry at the end but this did. I don't know why it did but I did. Just read it, listen to it and respect the men and women spoken about.

I'm at the end of chapter 6 and can't listen to anymore! Just a book about a bloke who made it into the Marines and is living off the fact. Just full of excuses at to why he has never fired a shot or seen decent action. The most exciting part up to this point is having kids fire a firework at him. Pretends he craves action and is so desperate for it but I imagine he is quite happy not seeing it and living off the fact he is a Marine (if you can call him that) the book may get better and full of action, i won't be listening to anymore as I just find his words hollow and don't think he really means any of them. Just a bloke with alot of excuses!

An important story that needed telling

What happened to these men was a disgrace, sold out by the very government and service that they were willing to and in some cases did, give their lives for.

There were some inconsistencies however in the story. It’s difficult to believe that upon passing selection for the SBS that one would pass on this opportunity after such a Herculean effort to return to life as a boot neck just to go to Afghanistan? The Apache has a 30mm cannon as opposed to 60mm as described in the audiobook. Some of the ‘lingo’ used, doesn’t seem accurate. Being ex forces myself these things have stood out.

Gets better as it unfolds

I wasn't impressed with the early chapters, but it sort of wound up, getting tighter like a spring. The pace reached fever pitch at chapter 12 onwards and by 15 it became an classic not put downable thriller. I did find the narration like machinegun fire in slow motion, staccato like at times. It could have been smoother. All togehter an exciting book, honest, truthful and compelling. I ended up with nothing but the highest regards for the Royal Marine Commandos in the book. Even though my service was very under another cap badge.

I struggled thru the first 6 chapters! A lot of changing of mind, decisions and excuses. I very nearly stopped listening. I am glad I didn't because Chapter 7 onwards was excellent with some brilliant action and true life accounts of military action. Narration was ok but this story needed an accent from South London where the author grew up! I also found some of the Military terms were not authentic and if you have served is really annoying!!

A good story but having served as an Infantry Officer for 16 years I have to say that there are a few bits which I found annoying to say the least. The narrator needs to understand military acronyms a bit more and pronounce them in the correct way. Even the Company names in 42 he pronounces incorrectly.

Royal marines are great soldiers but they are not Special Forces. To say that the SAS or Paras only come close to the Marines is an exaggeration.

Also the Infantry training is 26 weeks and not 11 as he states in the book. Wildly misleading! Phase 1 basic training to become a soldier is 12 weeks. All soldiers then have to complete phase 2. In the Infantry it is all merged into one 26 week Combat Infantryman's Course at the Infantry Training Centre Catterick. PARA training is I believe 28 weeks. Misleading facts such as these discredit what is otherwise a good book. However, I recommend it. It puts into context the events surrounding Sgt Blackman's conviction for murder.

Thank you for your service

If you don’t want to stand behind them, please feel free to stand in front of them !!!!

Not a bad listen at all. I would recommend but I would of liked more information about Sgt Blackman

Great down to earth life story of one UK Royal Marine during modern warfare with highly unfair rules of engagement.

All respect due but..

The narrator awful, gets a few things wrong like 4 0 Commando rather that "fourty" but most annoying is his cadence, almost comic like. A pity