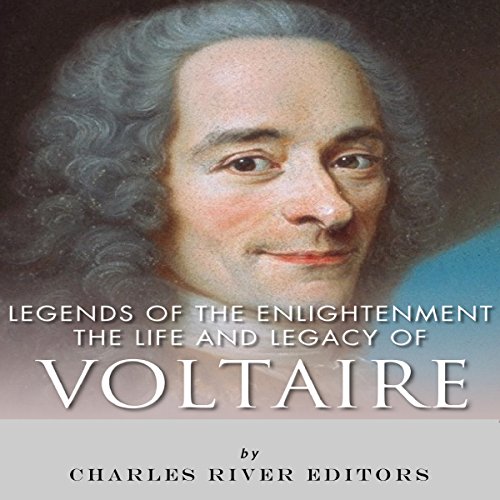 Legends of The Enlightenment

By: Charles River Editors
Narrated by: Mark Linsenmayer
Try for £0.00

"All men are equal; it is not their birth, but virtue itself that makes the difference." - Voltaire

The grand narrative of the Enlightenment, usually recounted and understood in terms of progress and modernity, generally appears as a simplified evolution from the trappings of superstition, feudalism, and everything "irrational" to a world more similar to today's world. Alongside the Renaissance, the Enlightenment is credited for the transition to an adherence to reason, secularism, and promotion of values such as individual and collective freedom and liberty. At the heart of the movement in France was François-Marie Arouet, better known by the pen name Voltaire, whose voluminous writings advocated for greater liberalism, including the freedom of religion and the separation of church and state. In addition to the classic Candide, Voltaire was a biting polemic whose satirical attacks on the Catholic Church were among the fiercest of his day. He also understood the risks he was taking with these writings, at one point explaining, "It is dangerous to be right in matters where established men are wrong."

The Enlightenment is looked upon fondly, and it serves to reinforce the notion that the present is superior to the past, but things did not change as rapidly or as completely as many believe. In fact, some recent historians have challenged the belief that the Enlightenment was responsible for the French Revolution, which is a vital issue when it comes to Voltaire. After all, Voltaire, as his contemporaries and as most of his modern listeners know him, is widely regarded as the pinnacle of Enlightenment thought, the symbol of the era of reason, and the harbinger of modern values.

What listeners say about Legends of The Enlightenment