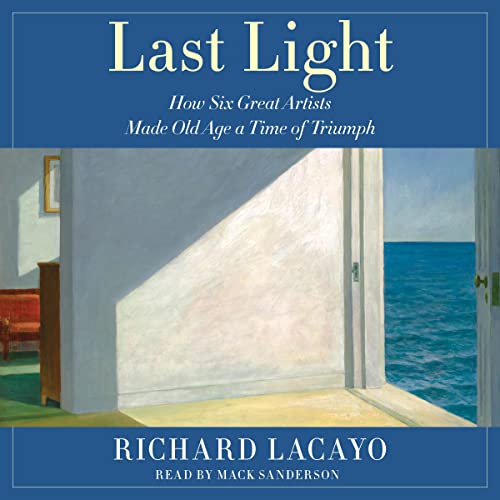 By: Richard Lacayo
Narrated by: Mack Sanderson
Try for £0.00

One of the nation’s top art critics shows how six great artists made old age a time of triumph by producing some of the greatest work of their long careers—and, in some cases, changing the course of art history.

Ordinarily, we think of young artists as the bomb throwers. Monet and Renoir were still in their 20s when they embarked on what would soon be called Impressionism, as were Picasso and Braque when they ventured into Cubism. But your 60s and the decades that follow can be no less liberating if they too bring the confidence to attempt new things. Young artists may experiment because they have nothing to lose; older ones because they have nothing to fear. With their legacies secure, they’re free to reinvent themselves...sometimes with revolutionary results.

Titian’s late style offered a way for pigment itself—not just the things it depicted—to express feelings on the canvas, foreshadowing Rubens, Frans Hals, 19th-century Impressionists, and 20th-century Expressionists. Goya’s late work enlarged the psychological territory that artists could enter. Monet’s late waterlily paintings were eventually recognized as prophetic for the centerless, diaphanous space developed after World War II by abstract expressionists like Jackson Pollock and Phillip Guston. In his 70s, Matisse began to produce some of the most joyful art of the 20th century, especially his famous cutouts that brought an ancient craft into the realm of High Modernism. Hopper, the ultimate realist, used old age on occasion to depart into the surreal. And Nevelson, the patron saint of late bloomers, pioneered a new kind of sculpture: wall-sized wooden assemblages made from odds and ends she scavenged from the streets of Manhattan.

Though these six artists differed in many respects, they shared one thing: a determination to go on creating, driven not by the bounding energies of youth but by the ticking clock that would inspire them to produce some of their greatest masterpieces.

What listeners say about Last Light

A marvelous account and tribute to six artists whose work blossomed in old age. Worthwhile for the general listener and art scholars alike. Read in the mellifluous tones of Mack Sanderson.