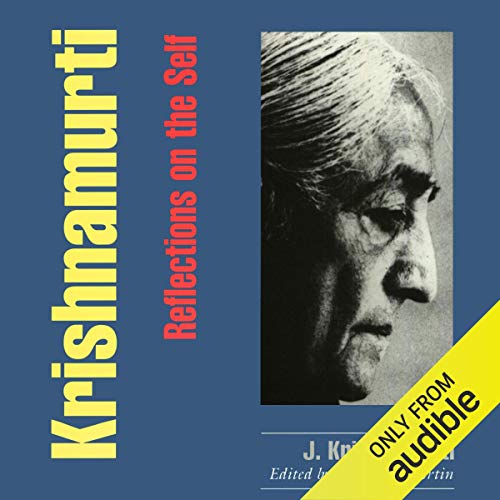 Krishnamurti: Reflections on the Self

By: Jiddu Krishnamurti
Narrated by: Jim Tedder
Try for £0.00

Described by the Dalai Lama as “one of the greatest thinkers of the age”, Jiddu Krishnamurti has influenced millions throughout the 20th century, including Aldous Huxley, Bertrand Russell, Henry Miller and Joseph Campbell.

Born of middle-class Brahmin parents in 1895, Krishnamurti was recognized at age fourteen by theosophists Annie Besant and C W Leadbetter as an anticipated world teacher and proclaimed to be the vehicle for the reincarnation of Christ in the West and of Buddha in the East. In 1929 he repudiated these claims and travelled the world, sharing his philosophical insights and establishing schools and foundations.

Because Krishnamurti had no interest in presenting theories, his thought is far removed from academic philosophy in the analytic tradition, yet his insights remain extremely relevant to contemporary philosophical theories and to those interested in understanding themselves and the world. Rather than a theorist, Krishnamurti is regarded as a seer and a teacher. He perceived inherent distorting psychological structures that bring about a division in the individual's consciousness between “the observer” and “the observed”. He believed this division was a potent source of conflict, both within the individual and externally for society as a whole, and offered a way to transcend these harmful structures through a radical transformation in human consciousness.

This is a collection of Krishnamurti's writings and lectures about the individual in relation to society. He examines the importance of inquiry, the role of the emotions, the relation between experience and the self, the observer/observed distinction, the nature of freedom, and other philosophical ideas.

What listeners say about Krishnamurti: Reflections on the Self

Would you listen to Krishnamurti: Reflections on the Self again? Why?

Probably not. Not for some time at least. This is not to say it was not extremely illuminating, but to listen again would defeat the purpose of the work - for me at least, as the message is delivered loud and clear, piece by piece into a congruent whole and repetition would seem to me to be an exercise in cataloging and memorising for rather flaccid intellectual whimsy. The whole point seems to be to not merely read and to pat yourself on the back for intellectually understanding, but rather to do, to investigate for yourself.
The purpose of the collection seems to be to break down the psychological components of the ego driven self - desire, fear, ambition, anger, jealousy, sorrow and above all conflict, in order to see what lays beyond. Not to repudiate and dismiss them through the forms of denial offered in the numerous methods which are probably familiar to anyone picking this book up in the first place, but rather to acknowledge them as an inescapable part of you and by simply observing them - neither accepting nor condemning, filtering or interpreting them through the medium of thought based on prejudicial memory, then they cease to become objectified and external, and thereby, apparently, cease.
What this leaves you with I have no more idea than I did when i first started listening to the book. I have read Krishnamurti several times over the years but I feel that in the listening I was more able to understand the clarity of the points, reiterated again and again in differing forms but always returning to the central point.
It still leaves big questions, but leaves you with the feeling that many of the ways you have previously sought fulfillment to these answers are somewhat childish and probably raise more obstacles than they lower. Do you yearn to perfect the art of Yoga, follow the path of the Buddha, to imitate Christ, to understand the Tao? Perhaps that is part of the reason you never will!

What was one of the most memorable moments of Krishnamurti: Reflections on the Self?

Not really applicable! The book should be taken as a whole.

Have you listened to any of Jim Tedder’s other performances? How does this one compare?

I haven't listened to him before. I found the description in one review of his voice being like the voice over for a movie trailer quite amusing (and a little bit precious...), but I can see what the reviewer meant, he does have a rather sonorous, slightly booming quality to his voice, but I found it rather neutral actually and quite appropriate (I actually preferred it to Krishnamurti's own voice - shock horror!). He also read very carefully, with good emphasis, rhythm and clarity. I don't usually like American narration on non American books (now who's being precious?), but this was a good choice (one star removed only because it wasn't Richard Burton!).

Again not really applicable for the same reason as above.

Reading and hearing Krishnamurti always leaves me with the feeling that I understand what is being said, but the thought that remains is that I am like a blind man being asked to simply, see. Although I also feel that, to a certain extent, some more of the cataracts have been forever removed.

it's content and delivery are enlightening. This is what they should teach at school. Society tries to condition us with all its unintended consequences.

Challenges many/majority of the notions that so called 'society' would have us believe - unlike many 'new age' manipulative books, Krishnamurti has no hidden agenda - this is an extraordinary work. Ignore it at your peril....

An excellent and thought provoking Audio book one I would highly recommend to those looking for insight.

Incredible insights into how we operate! Need to re-read and think about this an awful lot. Highly recommended.

A gateway to awakening

Well. This was a hard listen, to be exposed to oneself and inquire on what is. Really does a number on the ego. Very effective and Worth taking the lessons, helps with living this day 2 day life.

Its almost a contradiction of the theme to say one needs to concentrate fully to take it in. I can’t explain it but you’ll need to listen to it to understand what I mean.
I have always been an advocate if self development and have always made this one of my virtues. However, this book has changed my position on this. Although was already enquiring about self awareness, this book has been a significant introduction into the idea of self awareness which I shall now make this a daily endeavour.

The conversational and practical style of this work would have been perfect, had someone with the ability to understand those facts had narrated it.
Instead it seemed to be narrated by a William Shatner impersonater who insisted on breaking the.. Sentences.. Into.. Smaller sentences. This made it VERY difficult.. To follow..
After listening to Alan Watts for a few weeks, who has a fluid, theatrical style, it wasn't.. Much.. Fun and took a lot of concentration.
Beam me.. Up.. Scotty

The two hemispheres meet but were always one. No nonsense revelation to realise freedom and appreciate how it is always there right under our noses!

The good: I can't give this content anything less than a 5/5. Krishnamurti displays a refreshing disregard of any authority, even his own, at the same time revealing deep insight: just nails it, over and over again.

The warning: This book is presented as a series of lectures with questions and answers at the end of the lecture. The listener must be aware of the fact that Krishnamurti will list a number of observations about common human longings and fears, which are expected to be recognised by the listener through own self-examination. So here it is not enough to have an intellectual understanding (of psychology or whathaveyou), one must have done the actual work.

The bad: some of these conversations have ideas that can go quite deep. Ideally one wants to think about a certain sentence that has been said, and its implications and that forces one to pause the audiobook, or even rewind a little bit every now and then.

The ugly: The narration is clear, but robotic. It is somehow unforgivable to screw up the narration of a text that is, already by itself, written in the format of a conversation. One needs to really think twice first about the text and then about how the original conversation would sound like. This makes it more difficult to understand a content that by itself isn't easy to grasp, even in text form.

Found in it a path-less path to real freedom of the mind without the conditioning by authority. An insight into insight.

The teaching is fantastic. I believe I understand his words due to reading other teachings and Alan watts.
However, it could be explained better. The way it's laid out here can get very confusing and contradictory. After listening to his teachings many times over, you start to get the idea behind the words. Stick with it and it will eventually hit you. :)

Excellent apps, as for Krishnamurti, he was a modern Socrates and I intend to continue reading his books and all about him in audible.

I wish I had read more about him in my youth.

Krishnamurti presents a different perspective that is secular and promotes the idea of self inquiry. Some parts were a bit repetitive, but perhaps necessary as we are all deluded in this concept of self/ego. This is the concept of Annata (or no self) in Buddhism but Krishnamuti poignantly explains that thought alone, cannot lead to wisdom because thought is limited and divisive.

It's strange to hear what are clearly k's words, in the voice of another, specially after hearing a lot of him online directly on videos. But strangely it doesn't take away from what is being said. And if you've heard k talk, you know how his pauses and repeated affectations can be annoying. Which is eliminated in a voiced performance obviously. That's a great plus.

Having said that, there are other people conversing too, and there is Q and A in there, but here the performance is limited to one voice. The work around is saying their names or initials repeatedly through the dialogue. This is very disorienting. I'd rather have different voices for different people talking. The medium clearly allows for it. But it's not a large part of the book and so it can be given a pass I guess.

Great content. i am finding the message of Krishnamurti, Eckhart Tolle, Nicht, prema Chodron, and many others to be similar.

i found it hard tobfollow, but one needs to listening to it several times to get it

Perhaps the deepest knowledge of yourself.

KM points to the deepest points in our minds. He is generous to share this.

God has spoken through Krishnamurti

Understanding through these words, you feel, you can almost touch the eternal. Wonderful audiobook. Thank you.