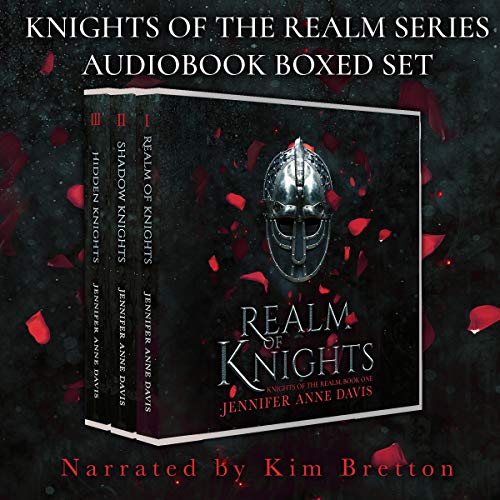 Knights of the Realm

By: Jennifer Anne Davis
Narrated by: Kim Bretton
Try for £0.00

The complete series contains all three books in the Knights of the Realm Series by Jennifer Anne Davis. That's hours of political intrigue, romance, and adventure!

Reid has spent her whole life pretending to be a man so she can inherit her father’s estate, but when a chance encounter threatens to expose her lie, she is forced to risk everything.

In the kingdom of Marsden, women are subservient to men and land can only pass from father to son. So when Reid Ellington is born, the fifth daughter to one of the wealthiest landholders in the kingdom, it’s announced that Reid is a boy.

Eighteen years later, Reid struggles to conceal the fact she’s actually a young woman. Every day, her secret becomes harder to keep. When one of Marsden’s princes sees her sparring with a sword, she is forced to accept his offer and lead her father’s soldiers to the border. Along the way, she discovers a covert organization within the army known as the Knights of the Realm. If Reid wants to save her family from being arrested for treason and robbed of their inheritance, she will have to join the Knights and become a weapon for the crown.

To protect her family, Reid must fight like a man. To do that, she’ll need the courage of a woman.

What listeners say about Knights of the Realm