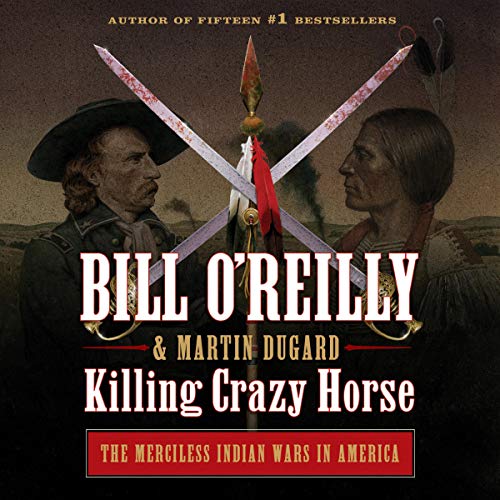 This program includes a prologue read by Bill O'Reilly.

The latest installment of the multimillion-selling Killing series is a gripping journey through the American West and the historic clashes between Native Americans and settlers.

The bloody Battle of Tippecanoe was only the beginning. It’s 1811 and President James Madison has ordered the destruction of Shawnee warrior Chief Tecumseh’s alliance of tribes in the Great Lakes region. But while General William Henry Harrison would win this fight, the armed conflict between Native Americans and the newly formed United States would rage on for decades.

In Killing Crazy Horse, best-selling authors Bill O’Reilly and Martin Dugard venture through the fraught history of our country’s founding on already occupied lands, from General Andrew Jackson’s brutal battles with the Creek Nation to President James Monroe’s epic “sea to shining sea” policy, to President Martin Van Buren’s cruel enforcement of a “treaty” that forced the Cherokee Nation out of their homelands along what would be called the Trail of Tears.

O’Reilly and Dugard take listeners behind the legends to reveal never-before-told historical moments in the fascinating creation story of America. This fast-paced, wild ride through the American frontier will shock listeners and impart unexpected lessons that reverberate to this day.

A Macmillan Audio production from Henry Holt and Company

Not the Best in the Killing... Series

It pains me to write a poor review, as I've truly enjoyed the Killing ... series by O'Reilly and Dugard. This book, however, doesn't measure up. It reads like a Readers Digest book - sketchy and lacking the full story. Full disclosure - my undergraduate major was US History, with a focus on Native American history vs. the US Government, particularly in the late 1800s, and I have read many more books on US - Indian Affairs than most.

First, the authors rely far too much on official military reports during the 1800s. It is important to understand the situation. For an officer to be posted to one of the Western outposts after the Civil War was that day's equivalent to Russia's posting to Siberia. It was lonely, dangerous, and unless there was a significant military accomplishment, it was a dead end to a military career. As a result, the official reports of Custer, Crook, Miles and others were overblown and unreliable.

Two far better books, about Crazy Horse in particular, are The Journey of Crazy Horse by Joseph M. Marshall III and The Killing of Crazy Horse by Thomas Powers - both available on Audible. These books are far more balanced and nuanced and demonstrate an understanding of Lakota culture and the experiences and motivations that prompted the Native American resistance to the US's western expansion.

Perhaps Bill O'Reilly's and Martin Dugard's best collaboration to date. The effort was both informative and entertaining. The book was a fair and telling history of the relationship between the Native Americans and American politicians. Many will be shocked at the atrocities committed by both sides. Make sure you add this book to your collection.

This was a very good book. I knew it would be.

Bill & Martin always do a first rate job when researching a book. I trust the facts presented and enjoy how it is put together as if I were listening to a story or many stories. Footnote: LOL. The narrator was wonderful as well. End Footnote.

couldn't put it down

wonderful book. I now have a better understanding of the Indian. Narration was good. easy to listen too and understand.

While this work does memorialize some of the history of certain indigenous tribes of what is now called The United States, this work is to often skewed with inference, supposition, assumptions, speculations, fantasy, etc.. I cannot recommend this work.

found the book and the reading very very very good. every time I got into my car I chose to play this audible / listening to the radio or other music. really loved it.

Bill O’REILLY does it again!!

this this book is well done,

I love the unbiased plain facts of our American history. Extremely interesting. it helps put into perspective our country and how we got here.

No doubt this book is historically accurate. I just was not expecting so many grizzly details, at points it almost took away from the masterfully told story.

I have listened to every book in the killing series from Bill O’Reilly. Killing crazy horse is by far my favorite. It’s really eye-opening and sad on how many times we broke the treaties with the Indians and how poorly we treated them.