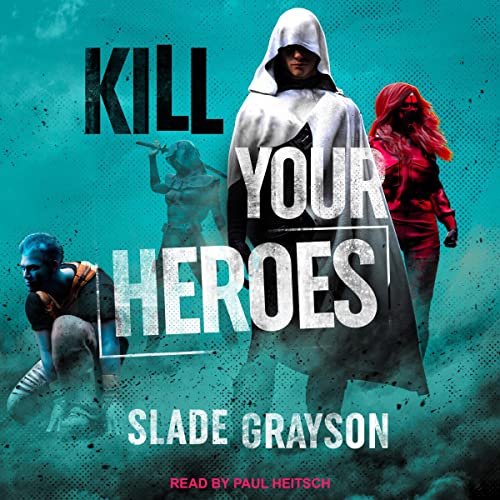 By: Slade Grayson
Narrated by: Paul Heitsch
Try for £0.00

Eddie Marr never planned to be a supervillain, but it seemed like a surefire way to become rich and famous. All he had to do was come up with a flashy costume, a signature gimmick, and commit a couple of high profile (yet nonviolent) crimes. Eddie figured he'd eventually get caught and spend a year or two in a minimum security prison. Then he'd write a tell-all book, do the talk show circuit, and parlay that into a regular TV hosting gig.

But the best laid plans....

As the Puzzler, Eddie was strictly a C List supervillain. He matched wits with Dark Revenger, a grim and gritty, street-level superhero. Eddie always managed to get away unscathed, but one night, things go horribly wrong and the Dark Revenger is dead. It's one thing to steal the Mona Lisa. But killing a world famous superhero? That's hard time with the worst of the worst.

Most people would cash out, change their identity, and go on the run. But Eddie knows there's no running if you're responsible for the death of an A List superhero. The only chance Eddie has in staying out of prison, and staying alive, is to take the Dark Revenger's place and not let the rest of the world know the original is dead.

What listeners say about Kill Your Heroes

couldn't make it past chapter 4

This story really amazed me. I went into it blind not knowing the author or anything about the book. I'm not even that much into superheroes.
It was just a spur of the moment purchase but once I got into the story I couldn't put it down and for once I looked forward to my daily commute.

I saw this and got it when I had a surplus of credits and it seemed mildy interesting. It actually turned out to be a pretty great superhero book, and I say that having read many and found them wanting. I thought it was going to be derivative and corny, but it grew on me with each chapter.

Frist half is kinda great!

So everything after the first half is just bleh. Our MC starts off a selfish jerk and then learns and grows and in the end becomes a true hero. Then our MC keeps being a selfish jerk. I loved the first half it was great funny and really good at pointing out the all the tropes and delivers great twists. Everything after the Time Skip is kinda dumb and feels tacked on for space. I might check out a squeal but overall it was fine a strong first half and let down second half

Its a bit obvious where this book was going

An a-Hole finds a job as a cape, with a heart of gold, the fights are okay probably the weakness of this book. the fall in love was a bit sudden and hard to believe but the villains were good believable villians .