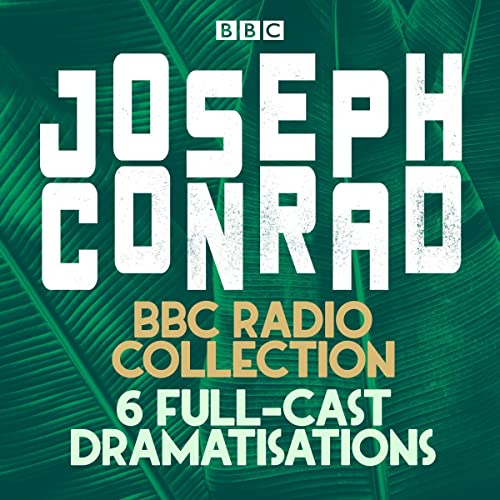 Dramatisations of six of Conrad's finest novels, plus bonus material.

Polish-born author and mariner Joseph Conrad is widely regarded as one of the greatest English novelists. His 16 years in the merchant navy profoundly shaped his fiction, giving him transformative experiences of adventure and exotic places, and a unique insight into the human psyche. Included here are adaptations of six of his best works, brought together for the first time and collected in chronological order, plus one fascinating bonus programmes exploring his life and art.

Heart of Darkness - Ordered to sail up the Congo River in search of enigmatic ivory trader Mr Kurtz, Marlowe's journey takes him deep into an unknown continent.... David Calder, Bill Wallis and Kris Marshall star in this radio production of Conrad's controversial masterpiece.

Lord Jim - Faced with disaster, young first mate Jim abandons the sinking SS Patna. Wracked with guilt, he tries to start a new life - but can he ever escape his past? Starring Simon Treves and David March.

The Secret Agent - A terrorist bomb explodes in London, killing the bomber and threatening the authorities and anarchists alike.... Ron Cook and Robert Glenister star in a two-part dramatisation of Conrad's prescient black comedy.

Il Conde - An elderly aristocrat is traumatised by a terrifying encounter in Naples in this adaptation of Conrad's haunting short story, starring John Moffatt and John Woodvine.

The Secret Sharer - An inexperienced skipper gives sanctuary to a fugitive murderer who seems like his doppelganger, and faces his own subconscious fears. Michael Feast, Christopher Scott and Stephen Tompkinson star in this dramatisation of one of Joseph Conrad's most popular short tales.

Victory - Set in the Far East, this 1915 novel tells of one man's struggle towards self-realisation and redemption in a hostile world. Starring David March and Patrick Barr.

Meridian: Joseph Conrad's Heart of Darkness - Onyekachi Wambu explores Conrad's most famous novel, inspired by the brutal imperialist exploitation of the Congo during the 1880s.

With thanks to Keith Wickham and the British Library.

Other parts played by members of the BBC Drama Repertory Company.

What listeners say about Joseph Conrad: The Secret Agent, Heart of Darkness & More