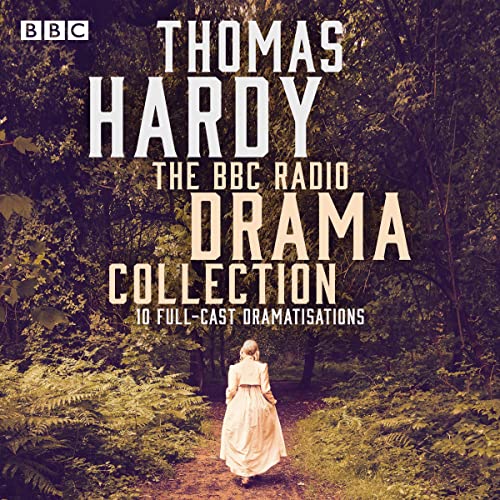 A definitive, fully-dramatised collection of the best-known works of Thomas Hardy.

Renowned novelist and poet Thomas Hardy is best known for his fatalistic, often tragic novels set in the 'realistic dream-country' of Wessex, in south and south-west England. Drawing on his own life, he created some of the most memorable characters and stories in Victorian literature - many of which are included here.

In five dramas taken from Radio 4's 'Hardy's Women' season, we meet a few of Thomas Hardy's most compelling female protagonists. The Hand of Ethelberta centres around an infamous poet who's not the lady everyone thinks she is; while Two on a Tower is the star-crossed love story of Lady Viviette Constantine and handsome young astronomer Swithin St Cleeve. The Woodlanders tells Hardy's tale of ambition, money and missed chances from the perspective of its unsung heroine, Marty South; unhappy Tess Durbeyfield recounts her life story in Tess of the d'Urbervilles; and in Jude the Obscure, Sue Bridehead relates the tale of stonemason Jude and his dreams of being a scholar. Among the stars of these irresistible adaptations are Rebecca Humphries, Olivia Poulet, Callum Scott Howells, Katy Sobey, Sacha Dhawan, Faye Marsay, Kirsty Oswald and Robert Emms.

Also featured are dramatisations of three of Hardy's other masterpieces. Far from the Madding Crowd sees the beautiful, independent Bathsheba Everdene (Alex Tregear) pursued by three suitors: Gabriel Oak (Shaun Dooley), William Boldwood (Toby Jones) and Sergeant Troy (Patrick Kennedy). In The Return of the Native, Hardy's poignant tale of love and longing is brought to life by an ensemble cast including David Calder, Emma Fielding and Adam Godley. And in The Mayor of Casterbridge, starring John Lynch and Ruth Wilson, a man spends his life trying to atone for his terrible past - but however hard he tries to conceal it, it will not be buried.

Rounding off our collection we have a pair of classic short stories - 'The Withered Arm' and 'The Fiddler of the Reels', starring Victoria Hamilton, Susan Jameson, Janet Dale, Stephen Tomlin and Struan Rodger.

Radio drama at its best

Each drama is perfection - perfectly cast and acted, perfectly realised - and each captures the pathos and tragedy of Hardy exquisitely.

For those unfamiliar with Thomas Hardy, his books are extremely depressing. I had to have a break after Woodlanders - a bit of levity before facing Tess and Jude was necessary.

I noted a previous review describing all the women as deranged doormats. It's probably a good idea, whilst listening, to accept that in Hardy's time women had few rights or opportunity for self-determination. In fact, the key central theme of the books/dramas is pointing out this injustice - for both women and the working classes during their time.

A really wonderful addition to my library!

I thoroughly enjoyed this dramatisation, and hadn’t realised what a wonderful story teller Thomas Hardy was.