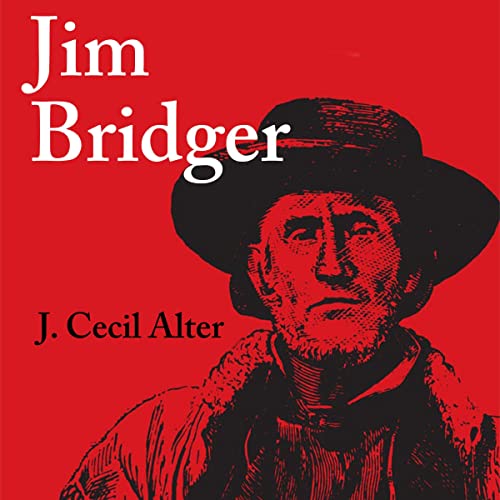 By: J. Cecil Alter
Narrated by: Ray Montecalvo
Try for £0.00

On March 20, 1822, the Missouri Republican published a notice addressed “to enterprising young men” in the St. Louis area. “The subscriber,” it said, “wishes to engage one hundred young men to ascend the Missouri River to its source, there to be employed for one, two, or three years. For particulars enquire of Major Andrew Henry…or of the subscriber near St. Louise.” The “subscriber” was General William H. Ashley, and among the “enterprising young men” who embarked with Major Henry less than a month later was 18-year-old James Bridger, former blacksmith’s apprentice. So began the Ashley-Henry fur empire and the long, colorful career of Jim Bridger.

In the years that followed, Jim Bridger became a master mountain man, an expert trapper, and a guide without equal. He came to know the Rocky Mountain region and its inhabitants as a farmer knows his fields and flocks. J. Cecil Alter tells us, “he was among the first White men to use the Indian trail over South Pass; he was first to taste the waters of the Great Salt lake, first to report a two-ocean stream, foremost in describing the Yellowstone Park phenomena, and the only man to run the Big Horn River rapid on a raft; and he originally selected the Crow Creek-Sherman-Dale Creek route the Laramie Mountains and Bridger’s Pass over the Continental Divide, which were adopted by the Union pacific Railroad.”

Such knowledge, together with extraordinary skill and uncanny luck, preserved Jim Bridger in a country where nearly half of his mountain companions met violent death. It also gave rise to a brood of impossible tales about Old Gabe and his adventures-tales which he himself may unwittingly have helped along with his droll humor.

What listeners say about Jim Bridger

More Detail Than I Needed

I listened to the whole 11 hours + of this book while driving two long road trips. I got all the information I ever wanted and more on Jim Bridger. This was more like listening to a complete history text with every written communication involving Bridger eloquently stated. Lots and lots of detail. As a historical piece of work it's very complete. As an interesting history book, it's too long and too boring.

I commend the author for gathering all this information, and it rates 5 stars on extreme detail but I could only give it 3 stars because it wore me down listening to it.

This is a thorough study of the life of Bridger. The author provides so much background that it doesn’t flow smoothly, but I appreciate the objective approach.