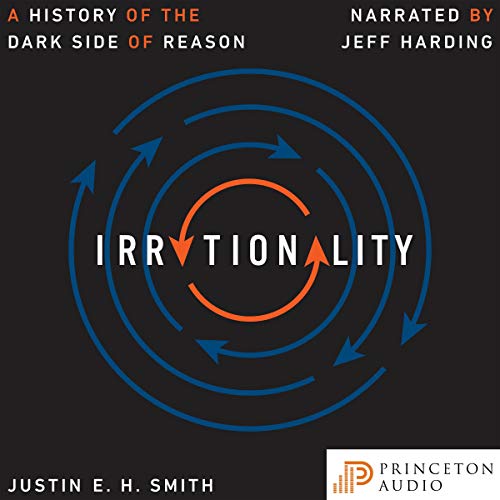 It’s a story we can’t stop telling ourselves. Once, humans were benighted by superstition and irrationality, but then the Greeks invented reason. Later, the Enlightenment enshrined rationality as the supreme value. Discovering that reason is the defining feature of our species, we named ourselves the “rational animal”. But is this flattering story itself rational? In this sweeping account of irrationality from antiquity to today - from the fifth-century BC murder of Hippasus for revealing the existence of irrational numbers to the rise of Twitter mobs and the election of Donald Trump - Justin Smith says the evidence suggests the opposite. From sex and music to religion and war, irrationality makes up the greater part of human life and history.

Rich and ambitious, Irrationality ranges across philosophy, politics, and current events. Challenging conventional thinking about logic, natural reason, dreams, art and science, pseudoscience, the Enlightenment, the internet, jokes and lies, and death, the book shows how history reveals that any triumph of reason is temporary and reversible and that rational schemes, notably including many from Silicon Valley, often result in their polar opposite. The problem is that the rational gives birth to the irrational and vice versa in an endless cycle, and any effort to permanently set things in order sooner or later ends in an explosion of unreason. Because of this, it is irrational to try to eliminate irrationality. For better or worse, it is an ineradicable feature of life.

Illuminating unreason at a moment when the world appears to have gone mad again, Irrationality is fascinating, provocative, and timely.

What listeners say about Irrationality

For me, this was a good book but not exactly perfect. I do think this is an important book. When I first saw it for sale I knew I had to get it because it’s been a pet peeve of mine for a long time that so many people claim to be so terribly rational and yet are clearly not. Human beings are not rational creatures and never have been. We have our moments, but they tend to be brief. Reason is taken us a long way, but only because a little goes a long way.

So here we’re taken on a journey through history and current events to explore how some of our most cherished ideas about rationality, such as how the Enlightenment brought it into sharp focus and bequeathed its legacy to the modern world is far from the whole story. Irrationality is baked into everything we do and is always ready to push back when reason threatens to take over. When things get difficult, we tend to trust our gut even when we shouldn’t.

This book certainly is as ambitious as it claims to be in the synopsis. It covers a lot of ground, maybe too much for its length. Some of the chapters could be entire books on their own. It contains a lot of references to philosophers and thinkers through the ages; some that I’ve heard of and some that I’ve barely heard of, if at all. The author seems to take for granted that the reader knows who all these people are. I’ve always fancied myself as having a pretty decent vocabulary, but if you’re no smarter than I am and you want to get as much as you can out of this book, keep a dictionary handy. I felt rather dumb sometimes, though I did get the gist of what he was saying.

There were moments when this book seems to meander and I was left wondering what any of this stuff has to do with his point about us being irrational. Maybe if I was smarter or better educated I would get it, but I thought he could’ve been clearer in places. Still, if you can get past that, it is a fascinating journey and I often found myself not caring if he ever got to the point because I was learning lots of interesting things.

Still, in the end, the point becomes more or less clear. We have always been irrational and we probably always will be, so we might as well reconcile ourselves to that fact, especially since we’re living in a time when this it could come back to bite us. The revolution that is the Internet, coupled with our irrational human nature, threatens to bring democracy and possibly civilization itself crashing down if we don’t learn to make better use of the faculties we have.

The author doesn’t seem to offer any solutions to the problem of a world gone mad, but the implications are clear. Self-awareness is important. We may not be as rational as we thought we were but we are capable of reason. We just need to make better, more strategic use of a few teaspoons of it that we have.

Great except where it isn’t.

This is a capable and interesting writer, an exceptional and knowledgeable philosopher, and this is in part an excellent - even note worthy - book. Unfortunately his obsession with Trump both detracts from his scholarly study and ultimately and significantly reduces the shelf life of the content. I am sick to my soul of current - or recent - American politics. I need timeless philosophy to soothe my soul. Please don’t pollute philosophy with the transient and the farcical. Also be at least even handed if you must stoop to this vulgar - more than irrational - circus. Spoiler Alert: liberal and Democratic is rational. Conservative and Republican is irrational. I would be quick to read anything else from this thinker. But I’d skip the political references.

A book true to form

Hard to follow, with long meandering chapters, and huge sweeping generalisations to characterise the whole world by a handful of pop cultural moments. well researched though, his comment on erudite philosophy, many ideas but poor synthesis, could easily apply to the book itself. The author apparently didn't realise that when writing a book about irrationality one need not even bother making arguments which appeal to reason since this is disloyal to the soul of his purpose and his base audience (double-ententre). However, he does at least do the topic some justice by insuring that almost all the arguments he makes are bad ones.

I intent to restart it immdiately! What more needs be written? Why write more words?