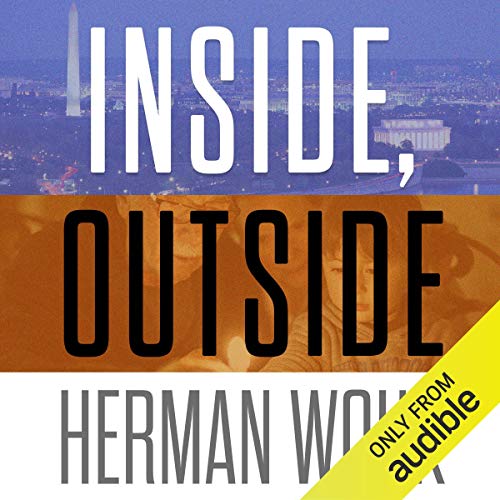 By: Herman Wouk
Narrated by: Peter Berkrot
Try for £0.00

"Every Herman Wouk book is like a stand-alone opus, and this audiobook is no different. The story of Israel David Goodkind makes for a touchingly funny novel that benefits from the performance of narrator Peter Berkrot. Written in the first person, the audiobook excels because Berkrot inhabits Goodkind's psyche, skillfully delivering Wouk's words in a manner reminiscent of the best New York comedians. Listeners follow Goodkind's life from his youth through college and to the Nixon White House, where he serves as a low-level bureaucrat. Berkrot's delivery is consistently charming, especially his voicing of Yiddish references that enhance the story's authenticity, making this one of the Pulitzer Prize-winning author's best works. Winner of AudioFile Earphones Award." (AudioFile magazine)

From Pulitzer Prize-winning American author Herman Wouk, Inside, Outside is a rich and compelling story - beautifully focused and often hilarious....

Israel David Goodkind is a minor bureaucrat in the Nixon White House, killing empty office time by writing the story of four generations of his large, sprawling Russian Jewish immigrant family. As he recounts his brief stint in show business, his torrid affair with a showgirl, and his encounters with a hassled and distracted President Nixon, Goodkind also witnesses historical events firsthand - the Watergate scandal, the Yom Kippur War - and eventually finds his way back to his Jewish faith.

Combining Wouk's wildly funny streak with deeply religious passages - and some intensely intimate romantic scenes rare in this reticent author's work - Inside, Outside is a striking departure from the traditional storytelling mode in which the author has won international fame, and yet it may be the most truly characteristic of all his writings. Written in the first person in a free-form, often ribald style, playing antic tricks with time, it offers all the passion, depth, historical detail, and humor that has made Wouk a best-selling author around the world.

What listeners say about Inside, Outside

One of the greatest storytellers!

I have a number of authors I love, authors that specialize in horror, police drama, mysteries, historical fiction and more. A number of these authors I am very loyal to and read everything they write. But in my mind, there is a type of author that is one step above a great author. I call these authors 'storytellers'. These are the kind of writers who are perfect for audio books, because the way they tell their stories simply pulls you in. It's one of life's great pleasures to have a storyteller's book read to you. James Michener has always been one of my favorite storytellers, but Herman Wouk is as well. I found this to be especially true with "The Hope", "The Glory", and now "Inside, Outside." The narrator for "Inside, Outside" perfectly captures the essence, the heart, the soul and the voice of Herman Wouk's story. I thank both Herman Wouk and Peter Berkrot for the wonderful experience!

This book took me by surprise in a great way. At 24 plus hours o.o spent 4
evening enjoying Izzy or David . As wonderful traveling or beach read. Thank you Mr. Wouk.

The world has changed so radically since each of the time periods involved here...a man working at the White House during Nixon's last days, writing at moments about the 'present', during Israel's 1973 Yom Kippur War...mostly writing about his growing up years in Brooklyn before the Second World War...and the novel itself written by Wouk in the 1980s, so each era, so separate in social mores from today, is also very separate from each other, which makes for an interesting experience here.

The reader really manages to sound like he is an educated cosmopolitan mid 20th century New Yorker originally from Brooklyn, and conveys the mixed emotions of the narrator very convincingly also, as this happily married older man with grown children and social and professional success reminisces and rambles about his youth. The voice brings to life the confusion of being a Jewish child in a Gentile's world, and in a religiously devout immigramt household with the younger generatiom around him rapidly secularizing, and finally the tumultuois experiences he has falling deeply in love with a completely inappropriate girl, a beautiful irreligious amoral showgirl who both strongly does, and strongly does not, want to marry him...mixed feelings he shares. An excellent job. This book is better in this recording than it was on paper when I read it decades ago as a new release, and I am glad I listened to it.

it was slow to start but then it really settles into the kishkes and becomes the sort of book you can't put down!

I started off loving this book and about half way through I couldn’t believe that the author was the same person who wrote “This is My God” and later wrote “ The Will to Go On”. Early on the book is a nostalgic look at the challenges facing New Americans who came from Czarist Russia in the early 1900 with their Jewish Orthodoxy intact and how they led bifurcated lives Inside and Outside. I could see the life story of many families I know personally and it made me smile and at times feel sad. Its a story of the search that one boy had growing up in America during the 20s and 30s and his struggle to find out where he fit in with his religious identity, family and American society. Halfway through the protagonist goes “off the path” and descends into depth of secular culture, forbidden relationship , and hedonism. I don’t think it was necessary to go into the level of depravity and crassness even though I’m sure there was substantial realism
Peter Berkrot was fantastitc . His ability to convey the various characters and their personalities added so much to the book. He even got most of the Yiddish and Hebrew phrases right. #Growingup #Nostalgic #Tagsgiving #Sweepstakes

Having thoroughly enjoyed several of Herman Wouk’s better known novels, I had high hopes for Inside, Outside, but this tale — as rambling and overstuffed as the leviathan of a kishka “Mama” prepares for the hero’s bar mitzva — does not meet the high standard set by the author’s earlier work. That said, the book is rich with comic nuggets — Bobbeh’s bubbling sauerkraut and the purchase of the infamous purple suit, to name just a couple — all further enhanced by Peter Berkrot’s delightful narration (I believe he won some sort of audiobook award for his performance) — and those were enough to keep me engaged till the end. But the story’s more serious aspects veered from bitter and preachy to mawkishly sentimental, and I found myself cringing at times. The structure is less like a traditionally plotted novel and more like a thinly disguised autobiography in which Wouk takes the opportunity to settle some old scores, particularly against Philip Roth, for whom the author bears a remarkable animus. The whole effect was a bit like listening to an overtalkative old uncle who is alternately amusing and annoying.

A Great Book for those on the Inside and the Outside

A touching, beautifully written “memoir” that, as a Jewish woman born with ancestors from Austria and Poland, brought back a lot of wonderful memories.

A great book, depicting Jewish life in the 1930’s in New York. Part is also in Israel, up to the Yom Kippur War.
Parts of the book are touching.I would like to describe the book more, but don’t want to give the story away. I have read many of Herman Wouk’s books and consider this among one of his best. They are all different in their own way, true art of a good author.The narrator mr. Peter Berkrot could not have been a better choice.
My thanks to Audible for making this book available to us, JK

Not just a book, an experience

If the term “epic” could be applied to a narrow slice of life, this book is an epic. An epic of deeply religious emigrant Jews embracing America. There are essentially three love stories animating this book: the love between David and his father, the love between David and Bobbi and David’s love for Israel. There is also hilarity and fascinating insights into Hollywood and the Nixon White House during the 1973 War.

Bringing it altogether is the narration, which, in its brilliance, is inseparable from the brilliance of the book.

Thank you to HW.

One of Wouk's best books

This is a wonderful book, brilliantly read.
Funny, sad, deep, meaningful, optimistic, thoroughly Jewish.
The reader captures all of it perfectly.