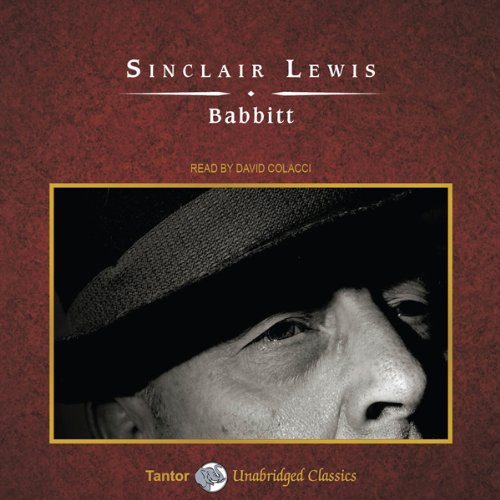 By: Sinclair Lewis
Narrated by: David Colacci
Try for £0.00

In this sardonic portrait of the up-and-coming middle class during the prosperous 1920s, Sinclair Lewis perfectly captures the sound, the feel, and the attitudes of the generation that created the cult of consumerism. With a sharp eye for detail and keen powers of observation, Lewis tracks successful realtor George Babbitt's daily struggles to rise to the top of his profession while maintaining his reputation as an upstanding family man.

On the surface, Babbitt appears to be the quintessential middle-class embodiment of conservative values and enthusiasm for the well-to-do lifestyle of the small entrepreneur. But beneath the complacent façade, he also experiences a rising, nameless discontent. These feelings eventually lead Babbitt into risky escapades that threaten his family and his standing in the community. Though published 80 years ago, this acerbic depiction of majority Americans, obsessed with success, material comfort, and midlife doubt, still rings true.

"[It is] by its hardness, its efficiency, its compactness that Mr. Lewis's work excels." (Virginia Woolf)

What listeners say about Babbitt

I went into school teacher--or rather high school student--mode while I listed to this. I knew--partly from experience--that Lewis is a great writer; I also knew that satire is an amazing--and even entertaining--rhetorical style. I also knew that Babbitt is considered a classic. So, I listened and listened, and listened some more. Then I plodded along a little longer until at last I staggered to the end. I worked the whole time through: I analyzed, wondered, recognized moments of literary flair, eagerly chuckled at stylized and marvelous absurdites from characters and events. I even presented a book discussion to a small group af eager women, who seemed to have appreciated the book and author, too.

But . . it was a long, correctly executed journey. I didn't hate it--not at all: I could recognize its worth and even its very modern applications. . . . But why didn't I enjoy it? It had a story line that worked . . .yet it went on endlessly.

It's just me, but I'm wondering if perhaps satires are most successful as short stories. I think most people either "get it" (the satire and wisdom) quite soon . . . or not at all. Alas, no amount of beating us over the head will often change our opinions one way or the other. And I guess that's the novel's one flaw: it goes on and on long after the reader should have gotten the point and learned the lessons. Lewis keeps beating us with satirical joy and despair long after we've had our fill of chuckling and internalizing.

Still . . . I strongly recommend reading Babbitt--it will do you good! (that's me as a teacher teacher speaking)

The Other, Relatable Gatsby

When most people think about popular works from the 1920s and 30s, they inevitably cite F Scott Fitzgerald‘s work. While he is an author that I certainly admire, I find that I like this book much more than his alleged magnum opus. Sinclair Lewis did not tell us a story of a rich and mysterious man trying to recapture a lost love. This novel is about an ordinary man who is trying to make it big in the world that is full of other people trying to make it big.

George Babbitt and his gang are much more believable than Nick Carraway and Gatsby. This book is much longer and shows the day-to-day struggles of someone who is living in a shallow society grasping at something that ultimately does not provide fulfillment, all while fighting the losing game of keeping up appearances in a culture that shines individuality.

One aspect of this book that I found especially enjoyable was its time capsule of 1920s clothing, slang, and descriptions of Daily life. This could have been just about anyone’s story 100 years ago. Sinclair Lewis is not quite Hemingway, but he is not quite Melville either. He waxes eloquent only in some parts of the novel, while others he treats with deadpan language to underplay the significance (especially the chapter where he gives the reader a panoramic of various tragedies and triumphs that are happening in the city during one night of the year).

David Colacci did a wonderful job voicing the characters. Everyone had a distinct tone and pitch, which made the parts easy to recognize even when the text did not provide a dialogue tag.

This was my first foray into the literature of Sinclair Lewis, and I plan to read more of his books.

When you first start the book it is very boring and monotonous. But once you get further into it you learn to understand the character and uncover flaws in our society.

very lovely and funny well narrated a window on America in the 1920s
enlightening! really love the narrator He made it fun to come back and listen everyday

This might be a good choice for readers who suffer from insomnia. I suspect that those who would praise this book are also g

A must listen & now a must read

I’ve meant to read Babbitt for years , decades , now having listened to this excellent reading of an incredible ( and incredibly funny ) observant work of art I must pick up an actual copy . Having recently moved to Chicago from LA, feeling a bit adrift , Lewis has helped me better understand and respect these good fellows (& gals) .

A Satire - and deeply human

It is an achievement to write something this satirical and in many ways scathing, and yet create a central character who, even if inarticulate and morally limited, still grabs and holds our deepest sympathy throughout. The book is as finely observed a portrait of America at the outset of the "roaring Twenties" as one could hope to find - and in its meticulously details and wry understatement, it is also often laugh-out-loud funny. But as Babbitt goes through his crises of identity and mid-life, I was gripped with worry for him, and I saw myself in him.

David Colacci has beautifully captured the "voice" of Babbitt, filled with bravura and yet with this undertow of vulnerability. I read the book in Whispersync, going back and forth between the written and the audiobook, but I preferred listening. Collacci breathed extra vitality into the story and its central character.

No Idea how anyone liked it

This book won the author a Nobel prize in literature, and for the life of me, I cannot see why. it is rambling crap, with no plot at all. terribly boring.
I must say, the narrator is just amazing. An incredibly talented person. he does every character's voice differently, and distinctly, with such skill, that it makes the listener believe he is listening to a play, with multiple actors.

Every bit as good as it was the first time I read it. Beautifully narrated.