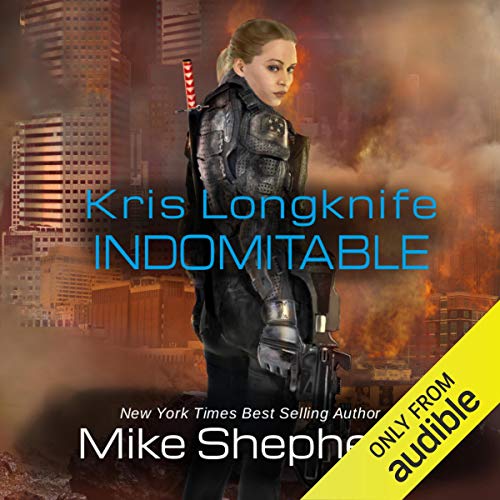 Grand Admiral, Her Royal Highness Kris Longknife, commander of the Iteeche Imperial Combined Fleets has the enemy on the run. Literally. The last time she entered a rebel system, every disloyal ship picked up its skirts and ran.

So why has she been ordered, as in requested and required, to make a formal report to the Emperor? Ron the Iteeche and his two young Iteeche Counselors have little to say on the subject except that some Iteeche think Kris is winning too much, too fast.

What human combat commander has ever heard those words?

Worse, when Kris returns to the capital, no one wants to sell her a ticket on the space elevator. Driving the streets is dangerous...not two roadside bombs but three detonate! Now she's got her embassy in sight and she can't get in!

What kind of games are the clan lords playing? What threats are being hatched against the young Emperor? Even more pressing, how does Kris get back into her embassy and back to her kids? The Iteeche Empire claims it has a 10,000-year history and traditions for every possible situation. However, they've never run into Kris Longknife Indomitable.

What listeners say about Indomitable

The more books you hear the greater your love will be of this series. I own 21 books in this series and I have read each book at least 2 times so far. (whenever I get a new book in the series i listen to the last 2 books before continuing on with the new book). I will always be #TeamNelly and this is one of my favourite universes in Sci-fi

This is book eighteen of the Kris Longknife Series. This book takes up where the last book left off. Kris is the Special Ambassador to the Iteeche Empire. The Emperor has asked her to command the Royal Naval Fleet as well as her own fleet. The Empire is in the midst of a Civil War.

The book is well written. The plot is interesting as are the characters. This book takes place on the main Iteeche home world. It is full of Iteeche politics, dirty tricks, as well as treachery. All of this is off-set by some humor provided by Abby and the children. My favorite character is Kris’s AI “Nellie”. In this book it is apparent that Nellie has become a sentient being. This book was hard to put down. I cannot wait for the next issue to come out.

The book is fourteen hours and two minutes. Dina Pearlman does an excellent job narrating the book. Pearlman has been the narrator for all eighteen books. I think it is important for a series to keep the same narrator through-out the series.

I laughed, I cried, I listened

Narration was outstanding, including gender distinction - males sounded like males and so on. The aliens grew as characters in good character qualities and got to be almost respectful to the hoo-mons. The Emperor character hopefully be fleshed out in the next book, in fact, I REALLY HOPE SO!

another fun addition to a decent series

I've enjoyed this series. While it is somewhat formulaic and predictable, the characters are likable and fun. The same goes for the narrator who is not top-tier but is still pleasant enough and gives enough variation in the voices.

if you've enjoyed the Kris Longknife series up to this point, you will not be in any way disappointed