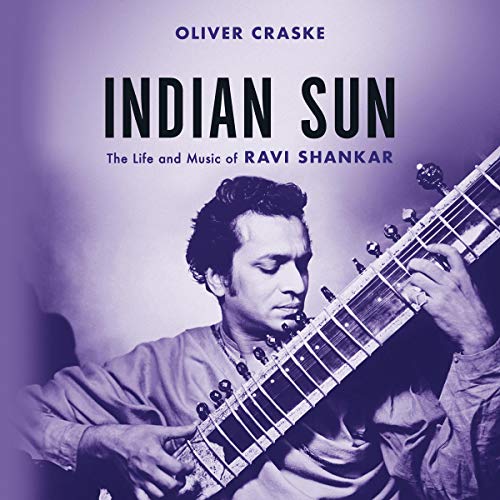 By: Oliver Craske
Narrated by: Sohm Kapila
Try for £0.00

The definitive biography of Ravi Shankar, one of the most influential musicians and composers of the 20th century, told with the cooperation of his estate, family, and friends

For over eight decades, Ravi Shankar was India's greatest cultural ambassador. He was a groundbreaking performer and composer of Indian classical music, who brought the music and rich culture of India to the world's leading concert halls and festivals, charting the map for those who followed in his footsteps. Renowned for playing Monterey Pop, Woodstock, and the Concert for Bangladesh - and for teaching George Harrison of The Beatles how to play the sitar - Shankar reshaped the musical landscape of the 1960s across pop, jazz, and classical music, and composed unforgettable scores for movies like Pather Panchali and Gandhi.

In Indian Sun: The Life and Music of Ravi Shankar, writer Oliver Craske presents listeners with the first full portrait of this legendary figure, revealing the personal and professional story of a musician who influenced - and continues to influence - countless artists. Craske paints a vivid picture of a captivating, restless workaholic-from his lonely and traumatic childhood in Varanasi to his youthful stardom in his brother's dance troupe, from his intensive study of the sitar to his revival of India's national music scene. Shankar's musical influence spread across both genres and generations, and he developed close friendships with John Coltrane, Philip Glass, Yehudi Menuhin, George Harrison, and Benjamin Britten, among many others. For 92 years, Shankar lived an endlessly colorful and creative life, a life defined by musical, emotional, and spiritual quests - and his legacy lives on.

Benefiting from unprecedented access to Shankar's archives, and drawing on new interviews with over 130 subjects - including his second wife and both of his daughters, Norah Jones and Anoushka Shankar - Indian Sun gives listeners unparalleled insight into a man who transformed modern music as we know it today.

What listeners say about Indian Sun

Essential for music fans, highly detailed and loving account of Ravi's musical and personal life and times. Greatly enhanced my understanding and appreciation of Indian classical music and culture. The narrator is excellent and has a wonderful voice

Incredible detail…maybe too much at times, so deeply detailed.

It was a struggle at times to keep listening as the amount of detail, sometimes not that engaging in my opinion, is almost too much.
However I cannot score this lower as that would be a disservice to the amount of research that has gone into writing this book.
Maybe if it was reduced from 20 to say 14 or 15 hours it would have been easier to listen to.
But nevertheless this is a true epic.

Fascinating, detailed. Much effort put into pronunciation of names, also many mispronunciations of English words.

For anyone with even a passing interest in Indian music, India in general, or it's influence in western 1970s culture, I cannot rate this book highly enough!

As a lover of all things Indian I was of course aware of Ravi Shankar and had a few of his recordings. But until reading this extremely readable biography, I had not really appreciated the extent of his influence on Western music nor the vastness of his talent, let alone his importance in the development of Indian classical music. I initially thought that the book might be a bit too long and detailed for me, but I soon realized this was not the case at all. It covers all aspects of his life and his music in detail from his early life in Varanasi (Benares), his initial training and traveling as a dancer, through his study back in India under his guru, his work for Indian radio, then his international career and fame. For this interested in his involvement with George Harrison (and other Beatles), Philip Glass, or Yehudi Menuhin, amongst others, all of these relationships are covered in detail.

When I got to the end of the book I felt saddened, wishing his life and the book could have lasted even longer!

Apart from the quality of the writing, and the extent of the research behind it, I must mention the narration which was very engaging.

A pretty fascinating life story told via a well written, at times gripping narrative. However it does at times border on hagiography, which is perhaps unsurprising given the subject at hand.

The narrator does a good job, although there is the occasional mispronounciation it's nothing egregious.

Overall would recommend for fans of Pandit Shankar as well as those with a general interest in Indian Classical Music.

A great and entertaining story that is severely shortchanged by a talentless voice artist...The publisher should have used someone with a smidgen of understanding how to pronounce many of the Indian names and terms ... These are not tangential but are central to the story ... Names are severely mangled ...

Excellent biography. Many mispronunciations in thereading.

Really enjoyed this biography of Pandit Ravi Shankar, which was comprehensive as well as engaging. The reading/narration is smooth, but the consistent mispronunciation of Indian (or indeed, any non-English) names and words, is distracting and grating.