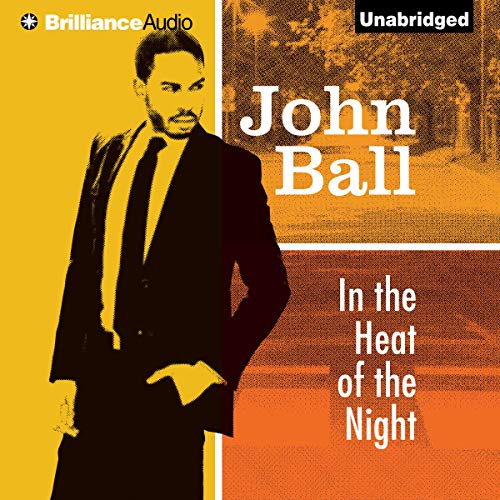 In the Heat of the Night

“They call me Mr. Tibbs” was the line immortalized by Sidney Poitier in the 1967 Oscar-winning movie adaptation of In the Heat of the Night, which won the Edgar Award for Best First Novel and the Crime Writers’ Association Gold Dagger Award and was named one of the 100 Favorite Mysteries of the 20th Century by the Independent Mystery Booksellers Association. Now fans of classic crime can rediscover this suspense-filled novel whose hero paved the way for James Patterson’s Alex Cross, George Pelecanos’s Derek Strange, and other African American detectives.

A small southern town in the 1960s. A musician found dead on the highway. It’s no surprise when white detectives arrest a black man for the murder. What is a surprise is that the black man - Virgil Tibbs - is not the killer but a skilled homicide detective, passing through racially tense Wells, South Carolina, on his way back to California. Even more surprising, Wells’s new police chief recruits Tibbs to help with the investigation. But Tibbs’s presence in town rubs some of the locals the wrong way, and it won’t be long before the martial arts-trained detective has to fight not just for justice, but also for his own safety.

What listeners say about In the Heat of the Night

Exceptional book. Absolutely exceptional, one of the best I have ever read/ listened too.
Wonderfully written and perfectly narrated.
Recommended without any doubt.

As far as old murder mysteries go, this one has definitely aged well. The portrayal of Southern US life, in all its prejudice and diversity makes this novel very important, as well as having a groundbreaking character like Virgil Tibbs

A classic and incredibly cinematic story. The narrator was very talented. A gripping listen from beginning to end.

Great book, fans of the film might be disappointed

Like most Americans I knew of the classic Sidney Poitier/Rod Steiger film (and the subsequent Carol O'Conner TV version) of the same name. I only became aware of the book many years later having caught the movie again on TV I noticed in the credits it was based on a novel. I decided to seek out an audio version of the novel and was quite glad I did. The thing that most surprised me was the stark difference between the film and novel versions of the story. While the basic premise remains the same, and the film even takes many scenes and lines of dialogue (including the famous "MISTER Tibbs") verbatim from the novel, there is a dramatic difference in tone. In the film takes a back seat to rather heavy handed social commentary. The novel however is actually a cracking good detective story told in the grand tradition of Poe, Doyle and Christie's famous literary detectives. Ball is one of the "Baker Street Irregulars", a famous group of Sherlock Holmes fanatics and it shows here, Tibbs evokes intentional echoes of Holmes.

That is not to say the novel is without social commentary. The entire premise of a smart sophisticated eloquent black detective showing up a group of ignorant southern bumpkins must have been extremely controversial in 1965 when it was originally published. However Ball deftly handles this, much more so than Norman Jewison's film version. In the film both the Police Chief and Tibbs are stereotypes, almost cartoonishly so. While most remember Steiger's oscar winning turn as the sweaty racist backwoods police chief, most forget that Poitier does not really deliver a particularly subtle performance either. He plays the quintessential "angry black man" in an almost unhinged performance. In some ways it seems appropriate because he is only reacting to Steiger's treetment of him which is far worse than the book.

However Ball's novel is much more realistic and in doing so I think stands the test of time better. In Ball's book Tibbs is angry, to be sure, but his anger is always tightly controlled, just under the surface. Tibbs does not yell his famous line in the book , its instead delivered almost offhandedly. Tibbs characters both white and black understand their place in the social structure in which they find themselves. Remember in both versions Tibbs was supposedly raised in the south, he would certainly "know the score", he had also supposedly rose through the ranks in a mostly white police department in the 1950s and 1960s, hardly something which could be accomplished by an angry arrogant militant. Ball's Detective Tibbs is much more cordial and diplomatic, sure of himself and arrogant, but instead of raising his voice he forces the white racists to contend with his genius mind. He does things in a way in which it superficially seems he is serving them,when in reality all involved know he is putting them in their place. Ball's Tibbs does not think he will upend the southern social order, and does not try to. He , his ancestors named Holmes and Poitrot, doesn't solve the case to "show up " the whites, but does so because his intellect locks on to a problem with laser focus and once involved he simply cannot let it go unresolved. He is a pure intellectual.
Ball also bravely allows the characters to grow, both black and white, but only to a realistic degree. The white characters seem real, while they are racist only a few ancillary ones are cartoons. Gillespie and Wood are painted as ignorant, products of their upbringing, environment and egos, but not evil. In that they have the capacity to come to respect and like Tibbs, not because he yells at them or browbeats them, but because of his genius and constant professionalism.

Those fans of the film who expect to see the fireworks of the movie may come away disappointed, however mystery lovers may find an unexpected surprise. As for the social aspect, the novel, I feel anyway,may say a bit less, but is a much more realistic product of its time.

Always loved the movie, but had never read the book, so I decided to finally check it out. I usually don't enjoy audio books that much, but I was pleasantly surprised by this one. The differences between the movie and the novel made for an interesting "read". The narrator had a pleasant voice and did a wonderful job of bringing the book to life.

Incentive and original story. Great plot, characters and atmosphere. Timely at the time it was made and timeless story. Virgil Tibbs is one of the great detective characters of all time.

the finest in all ways

I have listened to this book over the years and never tire of it. This recording is perfectly done.

I have watched Rod Steiger and Sidney Poitier in their incomparably brilliant performances in the 1967 movie that I love and return to often. Now I have discovered the novel that inspired this art for the screen; and it is a carefully crafted and elegantly written story that illuminates the south still locked in the prison of crippling Jim Crow culture. The pain of this era is somewhat softened by white men forced to acknowledge their bigotry although the catalyst for the revelatory soul searching is a human being of exceptional integrity sensitivity courage and intelligence. As Bill Gillespie expressed: “A credit to the human race.” Just as I watch the movie a few times each year, I shall accord this Audible performance the same devotion.

I'm glad I got to read the book. The movie and series were great too

i loved this book it was absolutely amazing. it was well preformed it was like i was in the book as the story was happening.