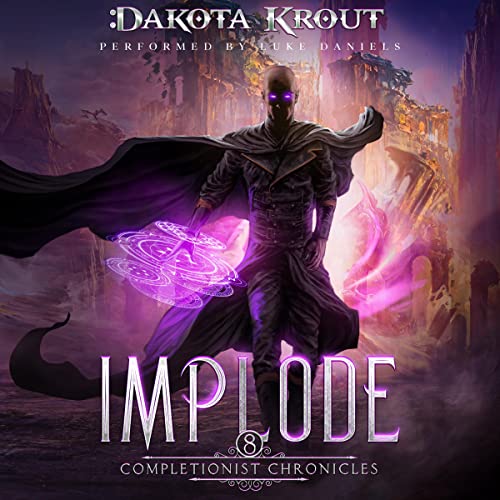 By: Dakota Krout
Narrated by: Luke Daniels
Try for £0.00

The Dwarves want to fight. They’re ordered to escape. Turtling up is the best of both worlds.

Joe and humanity as a whole messed up pretty badly, managing to get some of the most important people from both the Elven and Dwarven races killed. Now the war is escalating to unprecedented levels, and only one side needs to worry about being slain. With the attackers knowing they can get right back up after dying, they are throwing themselves against their centuries-long foe without caring for the consequences.

As the death toll rises, there’s still hope for Joe and the people that he chose to align himself with. His tiny Hamlet is hidden away from the Elves, so the Ritualist gets a quest to escort the core of the Dwarven Oligarchy to safety: their History, and those that lived it. If he can manage to save even a few as the Dwarven Oligarchy begins to Implode, the race might one day have a chance to regain their former glory.

What listeners say about Implode

Not quite sure why I keep doing this to myself, but these get worse. Recovers a little in the last third.

This was another decent entry in the Completionist Chronicles. It's not quite the caliber of the first few stories but I don't regret having bought it.

The characters are quite well developed at this point although the dwarves all sound quite similar through the narration. Cleave and Havoc are the major standouts. Honestly, I still find Jackson quite annoying yet he seems to be shifting into a more central role.

The setting is bland. They are in the same area as before and they travel around doing bits and bobs. The villains were at least quite fun this time and better described than the scenery.

The plot of Joe helping the dwarves is stretched a bit thin. They aren't especially noble in the first place. I hope the next area depends less on the dwarves.

I also think that the author has forgotten some of Joe's powers like his resurrection ability. There do seem to be a few plotholes with bits like that.

All in all this book was OK. Nothing great but not too bad. if you've read all the others, read this.

I fallowed this story and others from this author for a long time now but from all the books so far Book 7 and Book 8 are the most disappointing and uninspired ones. There is nothing interesting happening.
Joe become an annoying deus-ex machina provider for when the story need something resoled. I could live with that but the way its implemented into the story is so shallow and uninteresting that i could skip whole chapters and miss NOTHING.
Book 7 and 8 should be one book and i think they originally were meant to be - but that would cut the profit $$$ i guess, so it got split into two.
Joe is boring and all the other characters surrounding him are either annoying or so one-dimensional that i couldn't care less for them (maybe beside Jaxon who is still quite fun).
Those books and the story goes nowhere. It just repeats the same stuff from earlier Books...
It feels like the author mean for it to be another endless cash-grab to be milked as long as possible with no real end planed for the story.

I honestly think that if it wasn't read by Luke Daniels but by any other less talented person it would not sell much more books after this.

I would recommend looking for a difrent series to read.
For example 'Unbound' by Nicoli Gonnella didynt disappoint me so far.

brilliant series that keeps getting better

This is a great book series that just keeps getting better.

good and interesting story progression without drgging it out with to much fighting.

I’ve really enjoyed this series so far but I will say that if the MC decides to go and “save” that person in upcoming books I won’t be listening to the rest.

Need I say more? This series just gets better and better. It’s a beautifully crafted story with some truly interesting characters and relationships.

yet another fantastic book plot has expanded. the book is well written and just enjoyable, as was the narration. can't wait for the next one.

pretty much turning to crap

This series was the one I pointed to when I tell people about LITRPG. last couple of books have been pretty halfassed. Dakota you're better than this.

This series is slipping

First, I never thought the day would come where I'd have to give Luke Daniels less than five stars. In this case his voices are so over the top, they're distracting. I can't get past the Dwarves who are insufferable.

The first couple of books in this series were five stars, but it gets worse with each book. Maybe I've been spoiled by other LitRPGs that are 60 plus hours per book and way more interesting and original, or maybe it's just getting old.

I'll likely not buy another.

Narrator is getting irritating

Made to to chapter 6 before I realized that I was sitting and getting increasingly irritated by the Narrator's overdone childish voices for almost EVERY SINGLE SENTENCE. To the point that I couldn't follow the story really. This is it, mister cursed baldy, It's been real, but I'm out.

Not sure I can finish this.

Very difficult to listen to. Everything is a joke and the characters are just silly.

The "joke" has become the story

the series started out so promising and has now become a series that just keeps retelling the same joke over and over.

Keep ‘em Coming! So happy this has come out and the speed they are coming out now.

Can’t wait for The next part. I’m not sure where this is going but I love the ride.

I feel like this book is good and spite of its narration. it's worth the credit but the narration made it a hard listen.

I felt it was a little childish.

to me it seemed the tone in which it was read and performed was a little much. the overall story was still relatively interesting, but in the interest of transparency it was immature and the story lacked depth.