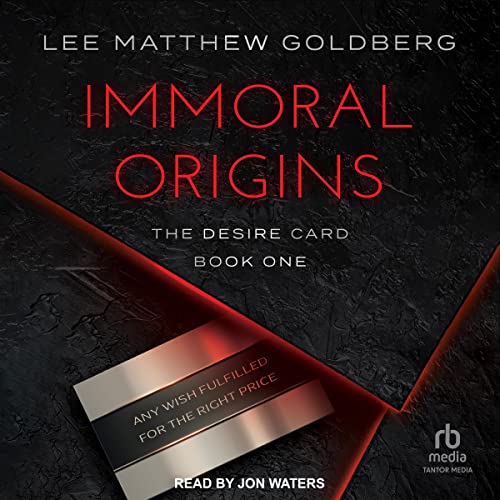 By: Lee Matthew Goldberg
Narrated by: Jon Waters
Try for £0.00

A pulse-pounding thriller that asks how far we're willing to shed our morals in order to help the ones we love.

It's 1978 in New York City, and disco is prominent. As are mobsters, gritty streets, needle parks, and graffiti-stained subways.

Jake Barnum lives in Hell's Kitchen. He's a petty thief selling hot coats with his buddy Maggs to make ends meet and help his sick kid brother. At a Halloween party downtown, he meets a woman with a Marilyn Monroe mask who works for an organization called The Desire Card—an underground operation promising its exclusive clients "Any Wish Fulfilled for the Right Price."

As Jake becomes taken with its leader, a pseudo father and sociopath at heart, he starts stealing from the rich and giving to the poor. In other words . . . himself. But as he dives deeper in with the Card, begins falling love with Marilyn, and sees the money rolling in, clients' wishes start becoming more and more suspect—some leading to murder.

The first book in the Desire Card series, Immoral Origins follows those indebted to this sinister organization—where the ultimate price is the cost of one's soul.

What listeners say about Immoral Origins