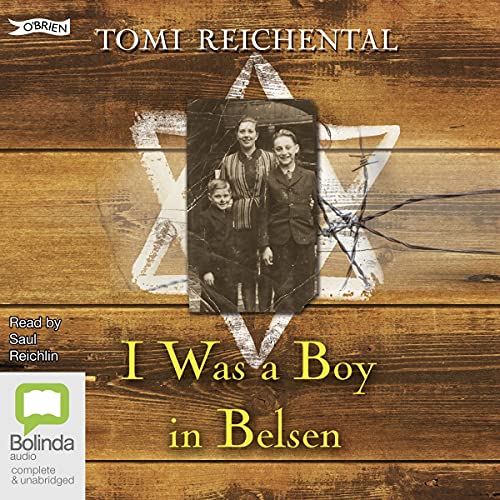 I Was a Boy in Belsen

By: Tomi Reichental
Narrated by: Saul Reichlin
Try for £0.00

A chilling reminder of the horrors of the concentration camps, as seen through the eyes of a child survivor.

At the age of nine, Tomi Reichental, along with his mother, brother, grandmother, aunt and cousin, were incarcerated in the notorious Bergen-Belsen concentration camp. Their crime: being Jews in Slovakia under Tiso’s regime which collaborated in the deportation of over 80 per cent of its Jewish population.

He recalls the daily brutality, starvation and dehumanisation of the inmates, the latrine ‘dolls’ that were actually discarded babies and the constant undercurrent of fear as parents tried to keep rumours of gas ‘showers’ and crematoria from their children. By the time Belsen was liberated in 1945, 35 of Tomi’s relatives had perished in various camps.

Tomi Reichental has lived in Dublin since 1959. For 55 years, he did not speak of his wartime experiences. Since breaking his silence, he has been back to Bergen-Belsen and to his home village of Merašice. He is a regular speaker in schools, where he is a living testament to the truth of the Holocaust for a new generation.

"Reichenthal’s extraordinary story has been well told in [I Was a Boy in Belsen]." (Irish Times)

"Books like this need to be read." (Evening Herald)

What listeners say about I Was a Boy in Belsen

A haunting and harrowing account of a child's experience of Bergen Belsen - witness to things a child (or any adult) should have to endure.

changed my view of the world... thank you Tomi

Thank you Tomi for sharing your life with us.. It had a deep impact on me.