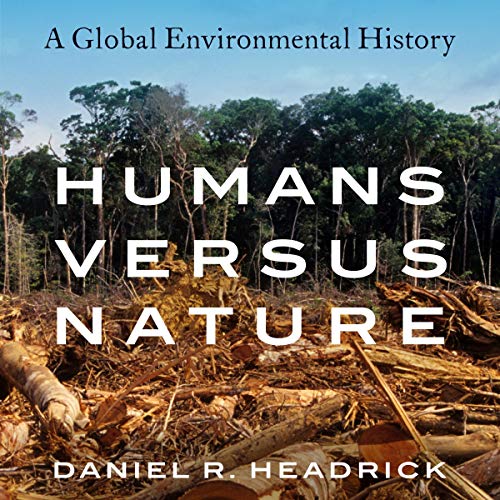 By: Daniel R. Headrick
Narrated by: David Stifel
Try for £0.00

Since the appearance of Homo sapiens on the planet hundreds of thousands of years ago, human beings have sought to exploit their environments, extracting as many resources as their technological ingenuity has allowed. As technologies have advanced in recent centuries, that impulse has remained largely unchecked, exponentially accelerating the human impact on the environment.

Humans versus Nature tells a history of the global environment from the Stone Age to the present, emphasizing the adversarial relationship between the human and natural worlds. Nature is cast as an active protagonist rather than a mere backdrop or victim of human malfeasance. Daniel R. Headrick shows how environmental changes - epidemics, climate shocks, and volcanic eruptions - have molded human societies and cultures, sometimes overwhelming them. At the same time, he traces the history of anthropogenic changes in the environment - species extinctions, global warming, deforestation, and resource depletion - back to the age of hunters and gatherers and the first farmers and herders.

Throughout, Headrick examines how human-driven environmental changes are interwoven with larger global systems, dramatically reshaping the complex relationship between people and the natural world. In doing so, he roots the current environmental crisis in the deep past.

What listeners say about Humans versus Nature