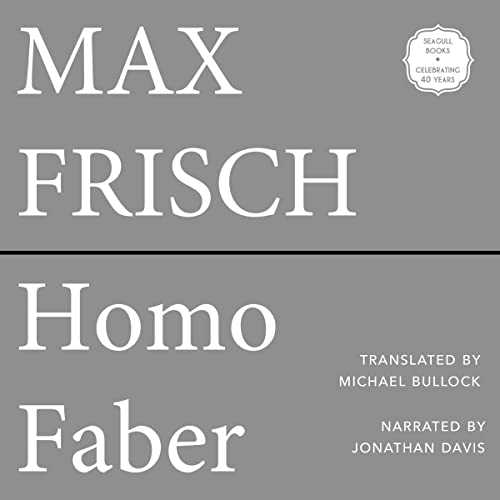 By: Max Frisch
Narrated by: Jonathan Davis
Try for £0.00

When his plane crash-lands in the Mexican desert, Walter Faber experiences the first of several remarkable coincidences that lead him almost unconsciously on a personal journey into his past. Faber is a truly dedicated technologist-engineer: He distrusts emotions and believes only in the calculable. Yet it is by a series of totally incalculable events that he encounters a lost friend, a former lover, and a daughter he has never known, until gradually he is caught in a tragedy of starkly classical horror. Ranging from New York to the sweating jungles of Guatemala, and from Dusseldorf to the ruins of Corinth he is moved relentlessly along a path towards illumination, fulfilment, and destruction.

Homo Faber penetrates deeply into the soul of modern man, who arrogantly assumes the superiority of his own handiwork over nature’s. But this common attitude often masks an ingrained self-distrust, a sense of inadequacy, and alienation from one’s deepest and most genuine feelings. A recurring theme in Frisch’s writing is man’s need to rediscover his past, derive self-knowledge, and atone for his failings. Caught by the fate they have prepared for themselves, his characters discover their own existence in a "sphere where the comic and the tragic meet". And Frisch, as one critic has remarked, "is one of the rare writers who can show both at once".

What listeners say about Homo Faber

The author is an excellent writer which made this an easy book to read but I could not identify with or like any of the characters in the story which definitely detracted from my enjoyment of the story. Maybe others who feel themselves akin to the characters would find the story more interesting. And others will no doubt be more perceptive than I as to the lessons or theme of this story for us modern people. It is difficult for me to identify the lessons of this “report” which others have asserted. I wasn’t sure if the story was simply the author’s sympathetic observations of modern humans or if he was attempting to offer us moderns a lesson. Probably it is both.