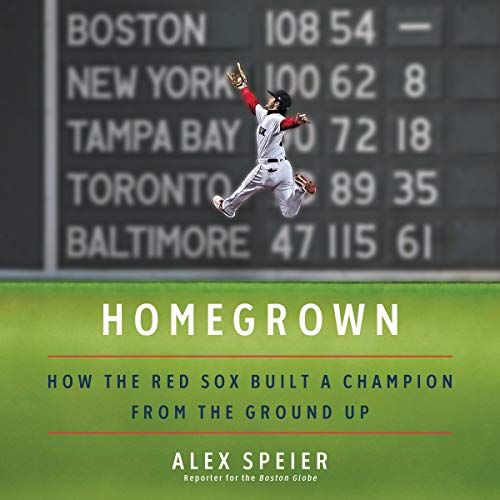 By: Alex Speier
Narrated by: George Newbern
Try for £0.00

The captivating inside story of the historic 2018 Boston Red Sox, as told through the assembly and ascendancy of their talented young core - the culmination of nearly a decade of reporting from one of the most respected baseball writers in the country.

The 2018 season was a coronation for the Boston Red Sox. The best team in Major League Baseball - indeed, one of the best teams ever - the Sox won 108 regular season games and then romped through the postseason, going 11-3 against the three next-strongest teams baseball had to offer.

As Boston Globe baseball reporter Alex Speier reveals, the Sox’ success wasn’t a fluke - nor was it guaranteed. It was the result of careful, patient planning and shrewd decision-making that allowed Boston to develop a golden generation of prospects - and then build upon that talented core to assemble a juggernaut. Speier has covered the key players - Mookie Betts, Andrew Benintendi, Xander Bogaerts, Rafael Devers, Jackie Bradley Jr., and many others - since the beginning of their professional careers, as they rose through the minor leagues and ultimately became the heart of this historic championship squad. Drawing upon hundreds of interviews and years of reporting, Homegrown is the definitive look at the construction of an extraordinary team.

It is a story that offers startling insights for baseball fans of any team, and anyone looking for the secret to building a successful organization. Why do many highly touted prospects fail, while others rise out of obscurity to become transcendent? How can franchises help their young talent, in whom they’ve often invested tens of millions of dollars, reach their full potential? And how can management balance long-term aims with the constant pressure to win now?

Part insider’s account of one of the greatest baseball teams ever, part meditation on how to build a winner, Homegrown offers an illuminating look into how the best of the best are built.

What listeners say about Homegrown

Great read if you like the Red Sox or baseball ops

Excellent in depth analysis of the behind the scene of the drafts, trades and minds in building a Championship team

Very tight and exhaustive research and weaving of multiple stories into a cohesive book. The narrator doesn’t seem to be a baseball fan, often reading things with odd intonation that a baseball fan would get. Breaking balls, 108-54 record was said as 108 to 54. Also, one GIGANTIC error is that Dustin Pedroia is a proud Sun Devil from Arizona State University. This book unforgivably says that he went to North Nogales Tech (the “university” of Arizona).

Would probably be best for a Red Sox fan who is becoming a die hard fan 10+ years from now. For a 10 hour book, I heard very little that I hadn't heard in news coverage and in other books.

Narrator was unfamiliar with subject matter.

The narrator reading this book was extremely unfamiliar with baseball terminology as well as simple pronunciation of well known names in book.

I love the Red Sox and this was an intriguing look into how they became champions in 2018. Highly recommend.

Must read/listen for Red Sox fans

I’ve been a Red Sox fan for 52 years and this book helped me to understand how much goes in to constructing a championship team.