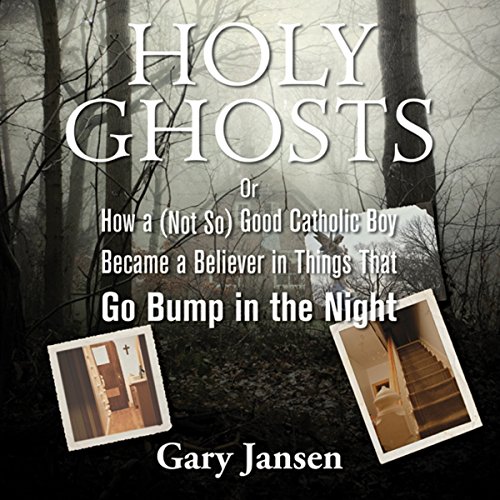 In this extraordinary true story, the haunting of a Long Island household forces a respected writer and editor to reevaluate the mysteries of life and death as he struggles with the frightening truths of his childhood home and his town’s past. Growing up in Rockville Centre, Long Island, Gary Jansen never believed in ghosts. His mother—a devoutly Catholic woman with a keen sense for the uncanny—claimed that their family house was haunted. But Jansen never found anything inexplicable in how their doorbell would sometimes ring of its own accord or in the mysterious sounds of footsteps or breaking glass that occasionally would fill their home - or even in his mother’s sometimes unnervingly accurate visions of future events and tragedies. Though he once experienced a supernatural encounter in a Prague church as a young man, Jansen grew up into a rationalist, as well as a noted writer and editor.

In 2001 Jansen moved back into the very same house where he had once grown up, to raise a family with his wife. In 2007 he encountered a frightening, full-blown haunting in his home. This was the first episode of a phenomenon that lasted a full year and eventually included unveiling the identities of the spirits who occupied his house, reliving a tragic murder in his hometown, encountering mind-boggling coincidences between local history and episodes in his household; and finally—with the help of Mary Ann Winkowski, the real-life inspiration for TV’s Ghost Whisperer—ridding his house of these uninvited visitors.

Holy Ghosts is not only a gripping true-life ghost story, but a wry and touching memoir, as well as a meditation on the relationship between religion and the paranormal, which are often considered at odds, but which the author shows are intimately linked.

“ Holy Ghosts took me into a completely convincing but very different version of reality from the one we live in. It serves as a forceful and fascinating reminder that we do not see the world that is, but only the part we have chosen to see. There are dangers and wonders in the dark, and Holy Ghosts affirms that they are very real.” (Whitley Strieber, author of Communion and The Omega Point)

What listeners say about Holy Ghosts

Generally, an interesting, well-written book. From my point of view, it would have benefitted from not having quite so much religious/bible story content. The writer very much sees his strange experiences from his perspective as a practicing and devout Catholic, which is fair enough I suppose but just not my thing at all.

The title led me to believe he worked to reconcile Christianity and ghosts. Instead, he embraces the unholy use of a (good) psychic. Not sure why he didn't go ahead and consult a numerologist to answer his date conundrum since he had already made the leap from the arms of the church. If you want a writer's personal experience with ghosts, it is a reasonable read. If you are looking for a better understanding of a Christian perspective on dealing with the unseen, keep looking.

A great read for this time of year, it seats well with winter and it's long and cold days.

The book is well written and narrated. It gripped me since the 1st chapter. The pace was perfect since there is no need for it to be fast so it creates the perfect atmosphere.

I'm also a Catholic and I too can related to Gary Jansen's experiences. We are all looking for answers.
Even if we have to resort to methods a bit out of the box to get the answers, It is all for a good cause.

I gotta tell you. I was looking for a book to creep me out a little. Sometimes that's the "shot in the arm" that I need to get through some days. But this is just not one of those books. Notwithstanding, it's wonderful. The conclusions Jansen draws from his paranormal experiences are faith-promoting, that perhaps in a terribly busy world inundated with routine and monotony, a haunting is perhaps the means through which he might be a believing person. I just think that's beautiful. It's not a black and white concept that many religious people would accept, that a haunting would be a growing opportunity rather than a unfortunate event to be feared. Given that it isn't what I was expecting in any sense, in tone or in message, I give this five stars and whole-heartedly recommend this to anyone.

Yes, Christians can see ghosts and they are not going to hell for it. I enjoyed this book very much. It was simple without all the gadgets, well told and also made me laugh out loud. It is not a how to (speak to ghosts ) but it is a how not to ( be afraid ).

Gary Jansen writes with the facility and familiarity of a friend telling you a truly fascinating story over dinner. I could relate to many of his otherworldly experiences, believing (as he seems to) that there are "no such things as coincidences." As a Catholic, I learned a lot about my faith in this book as well...

Would you consider the audio edition of Holy Ghosts to be better than the print version?

I haven't read the print version so I cannot say if it was better or not.

The story was a first person account of events so there was only the one character. He was believable though and I enjoyed his account.

His voice is quite good for narration and he made the story both believable and enjoyable even though it was spooky.

I really enjoyed this book. It was very informative in the Catholic aspect and ghosts. Very entertaining and educational. After reading this I had an ah-hah moment where I finally understood the very existence of the supernatural.

Narrator was terrible. Otherwise was an interesting story. I loved that the ghost story wasn't anything exaggerated or dramatic - made it more believable.

A Ghost story from a Catholic perspective

I really enjoyed listening to this book. It tells a good story and the narrator does an excellent job.
Concerning the experiences the author tells I'd have recommend him to contact a Traditional Catholic priest to perform a blessing over the house and to have Masses offered for these souls.

... well I guess it must be otherwise it wouldn't have been so boring. Nothing much happened really.

I bought the book after reading the reviews, which all seemed to say it was spooky and a good read. Personally I found it one big yawn and I fell asleep a couple of times while listening to it.
I really wish I hadn't wasted my credit.