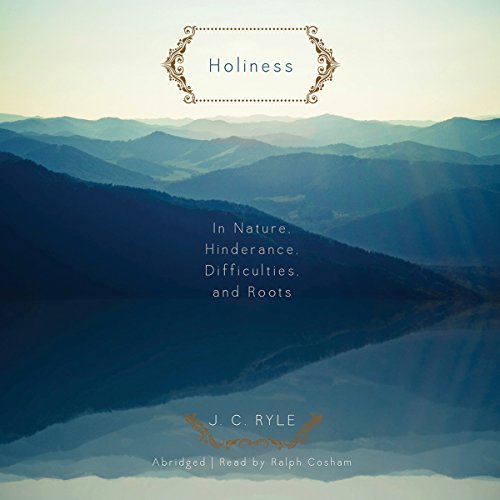 John Charles Ryle’s best known works have been reissued and widely read over many years. The fine qualities of his writings have ensured that his books are still popular and useful. This volume has become a classic work and is known and loved by many throughout the world.

In days when evangelical preachers are accused of being either superficial or dull, we have here a great example of one who was neither of these things. As Bishop Ryle explains and applies his texts with his customary simplicity and directness, the listener will find his conscience pricked and his soul examined. Ryle addresses hard and trying subjects that most modern evangelicals have chosen to ignore: the power and depth of indwelling sin, the necessity of a holy life, the struggle and fight of faith, counting the cost of following Christ - and that’s only in the first five chapters. Ryle’s Holiness has become essential reading on this most important subject, and the first chapter, “Sin”, has rarely been bettered.

J. C. Ryle (1816-1900) was appointed as the first bishop of Liverpool in 1880 and was the leader of the Evangelical Party in the Church of England for more than half a century. He is highly regarded for his plain and lively writings on practical and spiritual themes; their usefulness and impact have been consistently recognized and remain as wise and relevant today as when he first wrote them.

What listeners say about Holiness

A book of great value for our day, and for living God's way. I would read it again.

One is convicted to examine his/her standing in Christ in the light of God's word.

Amazing Book. A Must read!!

This writing from JC Ryle whatever the depth of your knowledge is attainable. I think it is a must read. This will be a help to your Faith, it certainly ironed out a lot of creases on certain topics for me. I’m a fan of Ryle and a believer in reformed theology. This is NOT the last time I will read this. God Bless

The writings of Bishop JC Ryle are always profitable and accessible. This book on Holiness is up there among the best and recommended to the Christian reader. This audiobook version I have found to be well narrated and presented and easy to follow.

Although written in 1879 the truth it contains is unchanging. Saying that, there are some words, phrases and thinking that differ from today hence not 5 stars. The narrator is excellent in that you imagine the author would read the text very similarly. He's quiet but with good diction and variation of tone

Thankyou J.C.Ryle and Thankyou Ralph Cosham whose voice I have come to love

J. C. Rule speaks to us in the voice of true christian doctrine from well over 100 years ago. It is a very good reminder for a modern Christian of the basics of our faith. He is uncompromising with lukewarmness. Every word he speaks is based on bible truth.

A really good book for reflection

I really enjoyed this book as it helped me to reflect on where I am spiritually and to challenge my complacency in some areas of my Christian walk.

Book was a recommendation by my Pastor and I was not disappointed. This was considered by many to be Ryle's opus and I don't discount that. His insightfullness and inspired writing will stand the test of time owing to the fact this was written in the late 1870's and is needed now more than ever.

Loved Cosham's reading of "The Screwtape Letters" which made this book even more enjoyable.

If you are a believer then "Holiness" will benefit you immensely.

If you are not a believer then "Holiness" can show you the importance of being saved. As Jesus Christ said, "It is not those who are well who need a physician, but those who are sick." Take heart and believe in Him.

Probably the best book I've ever encountered outside of Holy Scripture. I will definitely continue to revisit this book.

Print version is a must-get for serious Christians. Unnecessary liberties in pre-narration editing are unfortunate in audio version. Errors like incorrect cover image ("In" instead of "Its") display lack of serious overall effort on publisher's behalf.

"One of the Good Ones"

Now and then you stumble across a book and early into the first few chapters say to yourself, "Yes, this is one of the good ones. This is one that won't leave me soon." "Holiness" by J. C. Ryle is one of those books for me. Few things point us to Christ like deep, sound, biblical doctrine. Doctrine that glorifies and honors our King, Christ Jesus. For even a glimpse at some of those things, I highly recommend this book. The narrator was incredible as well. Before it was over I felt as though this might be how Ryle himself spoke. Great book all around.

This book is timeless and deserves five stars because of how saturated it is with Christ. The author points to him over and over and over and over in nuanced, surprising, and beautiful ways. Ryles' deep affection and trust in Jesus is evident on every page. The rhythm of his writing style is a perfect match for an audio book. I almost wonder if it would have been less enjoyable had I read it instead of listened to it. I completely agree with another reviewer's comment that Ralph Cosham's voice must be very close to what Ryles sounded like. His performance was phenomenal.

This was an excellent book. It was written over 100 years ago but is a timeless subject. It is very detailed and Ryle's assertions are back with scripture. The reader, Ralph Cosham, is the best audiobook performer I've listened to. His voice is easy to listen to and reads the material like he owns it. Great book! Recommended to anyone interested in Christianity and Holiness.

This narrator is very pleasant to listen to.

Would you listen to Holiness again? Why?

Excellent book on Holiness and this reading is very nice to listen to.Thank you! I'll be looking for more books narrated by Ralph Cosham.

This is a complete treatise on the subject of Christian Sanctification. It's thoughtful, thorough, and one of those books you'll want to read again and again.

What a marvelous work the Lord, by His Spirit, has brought forth through JC Ryle. His sermons have blessed many for generations. Sobering and edifying, as always. I truly enjoyed the narration. The perfect voice to convey this work.