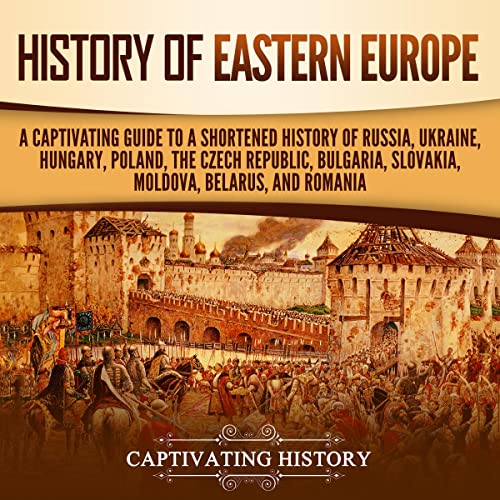 By: Captivating History
Narrated by: Jay Herbert
Try for £0.00

How much Eastern European history do you know?

The story of Eastern Europe is one of successes and failures, competing interests, and the rise and fall of states and empires. The ancient Greek and Roman empires knew the importance of Eastern Europe for trade and settlement. Later, during the Migration Period, also known as the “Barbarian Invasions", Eastern Europe became the stomping grounds for many people. The Visigoths, Huns, Slavs, and central Asian Turkic tribes like the Avars and Khazars all made their way into Eastern Europe.

With so many people moving in, the first states started to rise. Some of them would break apart as soon as they started, while others would form full-fledged empires. The medieval period would see some of the greatest empires of European history, like Kievan Rus, the Bulgarian Empire, Serbia, and the German Crusader states. By the early modern period, these great states would be replaced by Russia, the Polish-Lithuanian Commonwealth, and the Ottoman Empire.

In this audiobook, you will learn about:

What listeners say about History of Eastern Europe

30,000 ft overview of the history of the part of the world that has been, and continues to be so influencial to world history.

There is little in the way of detail by design, favouring a narration of specific threads of the historical places, figures and peoples

Sadly, the narrator appears to put an inflection at the end of almost every sentence, which makes it sound like he is mildly surprised buy what he's just read.

This bizarre foible completely ruined the book for me, as I find myself zoning out and not taking in what is being narrated.

Eastern European history is rich and captivating. This much-needed overview is overshadowed by the bizarre pronunciation and cadence of the narrator.

A welcome quick history of an important area but spoiled by the presenter’s bizarre pronunciation of names of people and places I thought should be known to anyone reading such a history.

I usually love European history books but here, the authors seems to have simply listed fact after fact, and date after date with no background information at all.
The narrator reads as though he is reading the ‘terms and conditions’ at the end of an advert.
I hoped that it would just begin this way but I couldn’t force myself to listen past the first 2 chapters.
Very disappointed.

A great intro to Eastern European history. Shamefully I didn’t know it was quite this rich and varied. It took me a while to finish this book as there were so many brief summaries and passing mentions of things to go and research further.
The narrator doesn’t pronounce all names correctly, but with a basic knowledge of European history/ geography I worked out where he was referring to. Might be less of a problem for American listeners.

Felt as though it was written for a freshman high school student. No real info. Almost like a “historical word graphic novel”

Terrible performance, many incorrect pronunciations. The early history was decent, but not presented in a linear fashion making it annoyingly hard to follow. The recent history (since 1900) was absolutely terrible. They included events like the Cuban Missile Crisis that were irrelevant to Eastern Europe and skipped events like the Solidarity Movement. They additionally ignored entire country's experiences in the 20th century. Their section on the break-up of Yugoslavia was terrible, and for some reason they kept mentioning how it was harder on women despite the Bosnian Serb massacres of men and boys specifically at Srebrenica. Finally, they discuss Ukraine and Crimea, but don't mention the Treaty of Budapest which supposedly guarantees the border of Ukraine.

Very distracting narration to the extent that learning was impossible. The production needs to be redone.

Just a recap of major events without details, analysis, insights and conclusions. Nothing sticks in the head because how poorly it’s written

Lesson in history of Easter Europe

This is a great historical record of Eastern Europe but, (there’s always a big but) the choice of narrator is questionable. He has a great voice but speaks and ends his sentences with a “question” inflection. Super annoying! Bordering on unbearable.

This simple and quick history would be fine if the narrator didn’t butcher names of important figures and places throughout. Be ready for 2 mispronunciations…per sentence.

It’s history, so it’s great. And these Eastern European countries deserve the attention this book thoroughly provides. However, it only took me about 15 minutes to determine that Herbert’s narratival cadence would be obnoxious. I’m pushing through but I do wish it was more enjoyable.

Very annoying mispronunciations from reader, which are weird and deliberate from an English speaker with an otherwise good tone and pace.

ice pick to my ears

narrator should be employed at Gitmo. Absolutely the worst I have come across. Don't buy.

The narrator mispronounces words constantly, and his delivery sounds like a caricature of a cheesy news announcer. Don’t buy this audiobook unless you are deaf.