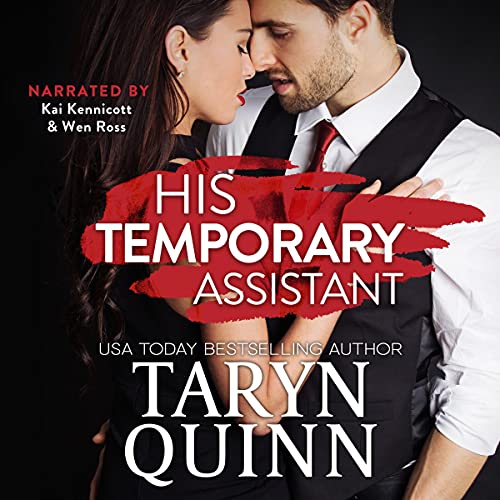 By: Taryn Quinn
Narrated by: Wen Ross,Kai Kennicott
Try for £0.00

To whom it may concern: I quit.

Preston Michael Shaw. PMS, as I like to call him.

I don’t need his job. I don’t need his fancy designer suits or his arrogance or his claims that I put a hex on him, because of course a strong, empowered woman needs to put a spell on a man. As if I want him. Pfft. He should be so lucky.

I definitely don’t need his irritating demands for caramel-coconut coffee or his fixation on being on time.

I certainly don’t appreciate how his touch singes my skin. Literally.

I need to stop obsessing about him. It’s just hormones.

One roll in the silk sheets and I’ll be over him.

But we can’t sleep together until my best friend - his real assistant - comes back from vacation.

Damn his admirable morals and my flaming panties.

And now I’ve been cursed, because I can’t resist the hottest, most annoying man I’ve ever known....

Author’s note: His Temporary Assistant is a stand-alone office romantic comedy set in our small town Kensington Square, which is near Crescent Cove. It has a happily-ever-after ending and no cliffhanger.

What listeners say about His Temporary Assistant

Wen Ross and Kai kennicott did not disappoint with the narration
His temporary assistant is the first book in the all new Kensington square series. I loved this book so much It has humor, fun, love and growth. Miss Moon and Pms are great, reading their messages between each other is so great. I could not put it down as always Taryn Quinn has a new wonderful story. I highly recommend this new series and cannot wait for the installment.

I’m just shy of 25% in and calling it quits. I can’t believe it - I have loved every book I’ve read by this author up to this point. Every other word is something about crystals or chakras or Tarot cards or being witchy. It’s ridiculous. I don’t believe in or condone these types of things and it’s grated at my last nerve to the point I’m returning the book. It’s not just that these things are mentioned in the book. These things are the book. 4 star narration, 1 star story and 2 stars overall.

His Temporary Assistant (Kensington Square #1) was a great read by Taryn Quinn. Preston is a divorce lawyer who finds himself without an assistant and a temporary assistant in the form of Ryan. She loves to call him by his initials PMS. She doesn't need the job or his attitude and arrogance and tells him that she quits. As he convinces her to stay, they grow closer together. I enjoyed reading this book and can't wait to read more by the author.

Ryan fills in temporarily for her friend who works for Preston Shaw, Esq. She is never on time and does not dress appropriately for the office. She is an uber strong woman and I love it! Preston's father, owner of the law firm, cannot stand her because she speaks her mind to him. Preston's mother loves her. Preston falls hard for her within the 4 days she works for him. Wen Ross did a great job but I did not care for Kai Kennicott as much in this book.

It took several chapters before the story became somewhat interesting and then the book just continued on that was which is not my usual experience with Taryn Quinn books. After reading almost all of her Crest cove series which I love. This one left me somewhat disappointed and underwhelmed. I fell asleep on the later mid of the book and fast forwarded through parts of the ending. So it basically didn't hold my interest. I guess I didn't feel as invested in these characters as I usually feel about her characters. Shame because I was hoping her books would not fail me and sadly this one did so much I thought about returning it, but I still like the Web and Kia duo.


This fabulous romantic comedy is an enjoyable delight and will definitely put a smile on your face. Taryn Quinn’s witty dialogue and humor is absolutely brilliant, they do not hold back any punches at all. The story drew me right in and captivated my attention the entire book. The two lead characters are awesome, I just adored Ryan G. Moon, some may think she is flighty but she is just a bit mystical in her ways, has her beliefs and sticks with them. She does not march to anyones beat but her own and I admired her for that. When her friend, April, got an opportunity for a vacation of a lifetime she needed someone to fill in for her at her job, an assistant to Preston Michael Shaw, Esquire, a divorce attorney. April warns him she is very carefree and not very timely, he is not happy that she is going on vacation but it is only a week and he will have to deal. First off he thought Ryan was a male, so that was his first surprise, his second surprise was hearing her podcast and there were several more surprises to follow, including how carefree she is and how she does not stand down when confronted or for something she believes in. These two were opposites in many ways but the chemistry between them is electric and undeniable. I loved Ryan’s nickname for Preston, his initials PMS, which is very fitting to his anal retentive personality. Preston set in his ways needed a lesson that there is more to life than work, Ryan is the perfect person for the job. Despite her lacking work ethics she still winds up impressing him with some of her office skills. I loved how everything played out in this book, the story is well written and wonderfully plotted with the perfect balance of drama, humor, heartfelt emotions and romance. Taryn Quinn thank you for another awesome story, the laughs and the emotional rollercoaster ride I loved every minute of it.

🎧📚🎧 Kai Kennicott and Wen Ross are wonderfully talented narrators and voice artists. They do an awesome job portraying these characters, humanizing them, giving each their own voice and personality. I love how they take each role and make it their own sounding believable and just as I picture them to sound. Wen Ross played Preston’s role with perfection, an uptight alpha at times, showing his soft side when it comes out. Kai Kennicott nailed Ryan’s role and played her to the tee. You could hear how much heart they put into their work as they capture the characters emotions and project them into their performance. They set the perfect tone for the story, handle the witty dialogue with ease and land the humor flawlessly. They are entertaining storytellers and a pleasure to listen to. Thank you for another awesome listen🎧

I absolutely loved this sexy, fun story by Taryn Quinn. Wen Ross and Kai Kennicott narrated this book wonderfully and captured Preston and Ryan’s personalities perfectly, from PMS’ uptightness to Ryan’s sassiness and their witty bantering. Wen and Kai’s delivery was spot on and I found myself chuckling as I was listening. This audiobook is a definite winner and is sure to be one that I re-listen to again and again.

If we could all be a moonbeam..

This is a fun and exciting story. Its a office trope which I love and the characters are lively. The story moves right along and I was able to spend tome getting to know these two and their friends. The two MC couldn't be more different. He is a workaholic divorce lawyer (can anyone say cynical?) who expects everything done on time. She is a free spirit who hate mornings and is quick witted and smart. I loved her character! Granted I know nothing about tarot card or crystals but she intrigues me with all her life and beliefs. These two are so hawt! The chemistry is coming off my earbuds. I loved going on their journey and meeting their friends.

I did listen to this on audio. One of my favorite things about this book…its narrated by wen Ross and Kai Kennicott and they did amazing! If I did not know this was by them I would have never guessed. They have changed it up and boy they did super.