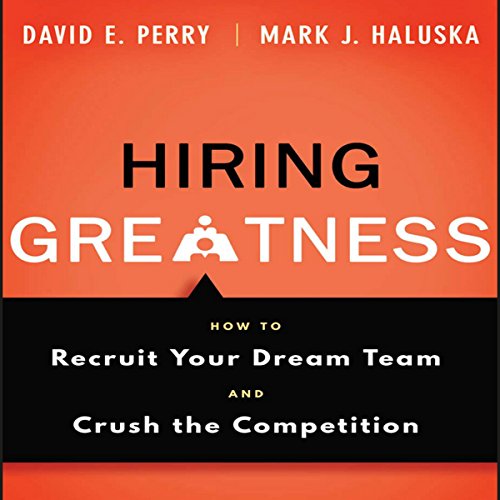 The unprecedented tell-all guide through the intricacies of executive recruitment.

The single greatest opportunity that an organization has to improve both performance and culture in one stroke lies in the hiring of a new executive - the right executive. The fresh thinking of a skilled leader has the potential to unleash innovation, empower employees, and generate wealth for the company. Similarly, a bad hire may mortally wound the organization and cause ripple effects throughout the entire economy.

One company created $3.8 million of market value each hour for six months, simply by hiring the right leader. Hiring Greatness takes you behind the scenes of one of the world's most profitable and secretive industries, meticulously showing how any organization can make monumental hiring decisions that lead to massive success.

"I know first-hand what happens when you hire the wrong person for a crucial position! It disrupts the entire performance of my team and slows us down considerably. Hiring Greatness is a step-by-step guide to making sure you get the absolute right person in those key spots!" (Barbara Corcoran, founder of Corcoran Group NYC and investor on the Emmy Award-Winning Shark Tank)

What listeners say about Hiring Greatness

Terribly shallow and self promotional at best. Not what i expected at all. What a waste

Full of great value for anyone involved in hiring talent. As a Headhunter and Executive Recruiter I am always learning, and even after 13 years in the industry there were many golden nuggets in this book I can use in my practice to provide a better service. I will be gifting this book to some of my clients who will also find value.

Great methodology for companies to follow. Each chapter well supported with excellent stories and examples.

I could not get into it

Sound like something out the 1950s approach if I was hiring a CEO for Ford.

I am so looking forward to reading, learning and implementing from this master of recruiting!

If you are a Leader This is a must read book

David Perry is one of the leaders in the Executive Recruiting space. He walks through his 1000+ successful hires and lays out a blueprint that is duplicatable no matter what level of leadership you are in! This is a must listen to book!

I have been in the recruiting industry for over a decade and this is the best book that I have ever read for anyone in our space. When I first read it I was an Internal Recruitment Leader within a large GovCon organization. I was able to quickly implement some of the ideas in this book into how we interacted with executive leadership and how we hired top-level talent that led us to some amazing leaders being hired.

Now that I have my own firm I have been using this book and his 2nd great book Executive Recruiting For Dummies as blueprints for how we grow.

Whether you are an internal recruiter, agency recruiter, an executive headhunter, or an organizational leader this is a great book to help you build the team that you want to build!