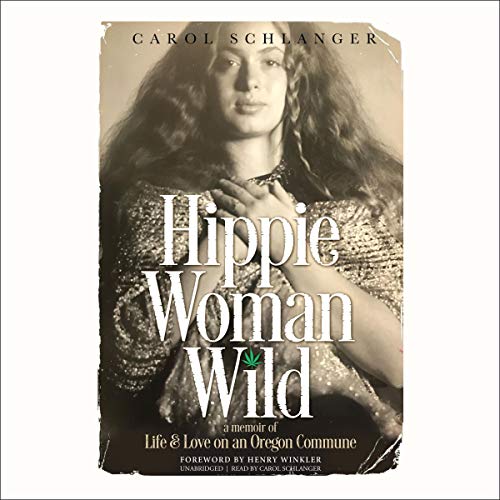 A not-so-nice Jewish girl, expelled from Yale Drama during the Vietnam protests, abandons her acting dream to follow the man she loves to an off-the-grid commune in Oregon.

At 23, Carol Schlanger was an insecure upper middle class radical. Her parents spoiled her, and she expected the universe to follow. It didn't. After being expelled from Yale, losing a coveted Broadway lead, and seeing a suicide splatter at her feet, she left NYC for the Great Northwest, to live in nature with a man "who made everything beautiful with his hands". At that time she chose love and nature over art and career...until she didn't.

Carol Schlanger put "hidden" cash down on an abandoned homestead - 160 acres. The commune followed - all 13 jammed tight into a broken-down cabin with no phone, no electricity, and no running water. They were dependent on each other for every human need and survival. But then freeloading and free love threatened the hard-won utopia. After struggling through infidelity, rape, and childbirth, all except the father of her child left when Carol refused to share land ownership. When, as a lone wilderness "wife", she accidentally set their house on fire, she realized she couldn't survive in isolation.

Strapping her toddler into a battered old Chevy, she headed to Los Angeles to reclaim her life as a mother, her power as an artist, and her responsibility as an adult. This time her Texan followed her. This is both their love story and a love story for an explosive, mind-altering era.

I am really interested in communes from this period. I previously listened to Peter Cayotes Sleep Where I Fall which I enjoyed but I might have enjoyed this even more. There is a real honesty from Carole all the way through this that makes her so endearing. She is both strong and vulnerable, individualistic but caring.
The narration is fabulous aswell and a great example why people telling their own story adds something extra. Her accents and impersonations are really enjoyable.

Loved every minute of this book.
Carol & Clint are my new fav couple 😊

My favorite memoir of the year so far!

If you're trying to decide whether to read or listen, listen! The author narrates her own book and she's a master. I nearly fell out of my chair laughing when she voiced her NY Jewish parents.

But overall, great writing and storytelling. Schlanger is funny in general--droll, deadpan, sarcastic--but is equally good at the more serious stuff.

If you like memoir, are interested in the 60s and communes--or even if this isn't in your usual wheelhouse, I recommend this book. And, minor spoiler alert: a happy ending. I wasn't expecting that!

This book resonated with me so much. And the performance really kept me engaged. I struggle to listen to stories being read to me sometimes. This was like having carol in the room with me telling the story in person. She had an amazing life.

Great performance by the author. loved her authenticity in presenting herself. Even when I didn't like what she said, I still liked her.
Fascinating to hear about the time and place. I would listen to 20 hours more detail if I could and ask lots of questions.

Loved it so much

Such a sweet & nice listen. Perfect for drives or doing chores. So fun to get transported back in time & into her life. Magical, interesting, & endearing.

What an interesting, well-written book this was! I was so sorry when it ended. I wanted to go on hearing more and more adventures of Carol and Clint. I am so glad their love has lasted throughout the years. I definitely recommend this book. I can't imagine anyone finding it boring.

Carol is brilliant as writer and performer. it's a history you don't want to miss. it's prose are pure poetry and laughter. I thought I knew everything about the hippies since I am one but this book was enlightening.

A memoir of commune life in the 70s

I don’t find myself giving out five star reviews very often but since good memoirs are so hard to write and because this is a period of twentieth century history I find very interesting, Carol Schlanger gets five stars for her writing and her narration of her story in the audio version of Hippie Woman Wild. I missed the 60s while in the Air Force then missed the 70s while in the insurance business. It sounds like it might have been a great experience, greater perhaps than collecting ribbons for service in SEA or learning the secrets of the general liability policy. I constantly encourage a close friend of mine who was a contemporary hippie of Carol’s era to write his memoir of the great commune he was part of. I think this book will have to suffice. Frankly, it would be harder to do it better than Ms Schlanger who spent time on several different communes and a total of four years in Western Oregon during the early part of the 70s decade. This back to the earth movement had many participants and communal situations proliferated in Oregon and throughout the entire country. Perhaps the impact of hippiness accounts for the extremely progressive politics of Western Oregon to this current day. One might think that a group of young people who smoked dope every day for years, dropped acid and ate halucinagenic mushrooms might not have amounted to anything. Might have blown their minds. Certainly, there are cases of that. But for the most part the commune hippies I know have led productive and often very successful lives in a variety of fields. One only has to listen to or read the epilogue of this book to be amazed at the arc the lives of Carol’s group led. This is a very funny book, by the way, and I would recommend the audio version just to hear the author’s impressions of her stereotypical New York Jewish parents who by the time Carol ran off to the commune had retired to life in Florida. Carol, a Yale grad and close friends with luminaries like Henry Winkler and Stockard Channing was beginning a career in show business when she fell instantly in love with a goy Texan named Clint. He wanted to go back to the land and she followed him to Oregon where she ultimately begged her parents to loan her money which she used to buy 160 acres on Floras Creek. The closest town was the tiny berg of Langlois, a village on Hwy 101 of less than 200 people where the sheriff also ran the store where the hippies bought their growing supplies. They had been living on a commune near Eugene and when Carol and Clint (who’s been her husband now for 45 years) got Floras Creek he invited their friends from Eugene to join them. Many did, including a Jakartan prince who had graduated from Harvard and a street kid from Brooklyn. What ensued was not always wonderful but often was. It wasn’t the perfect location with wet, cold winter weather far from supplies and medical attention. A chain saw accident, for example, was a major problem. Carol writes with great self-awareness and constant humor which makes the book laugh out loud funny and endearing. She has gone on to become a successful actress, playwright and story teller. You can go on Youtube and get a sample of her experience by watching a video called: “I’m in love with Chekhov.” It’s a funny story about a well endowed visitor who attempts to seduce Clint in front of Carol. Interestingly, there is also a chapter in the book titled “I’m in love with Chekhov”
which has elements of the same story and same main characters but is completely different. So, I’m not sure which one actually happened but the book version is much more amusing and graphic and involves and evaluation of the boys and girls of Floras Creeks genitals as they sit together in their sweat lodge. This raises the question about other stories in the book but I’m going to assume that all are true and the Youtube story cleaned up a bit for the audience she was trying to entertain. There’s lots of sex but not as much as one would suppose. Other communes were more into sharing but not so much at Floras Creek. People paired up and there was great upset at the thought of cheating which is the essence of the Chekhov story. The problem with communal life is that it involves a lot of cooperation with a variety of personalities that don’t always mesh. Carol’s commune broke down when the other residents demanded she give them equal ownership in her property because of the contributions they had made in improving it. Carol balked discovering she was, at heart, a capitalist. The commune dissolved. Carol and Clint were left alone in the woods with their new baby Huckleberry and the desire to restart her acting career. They still seem to be going strong. Good book. Enjoyed every page.

Have fun with this groovy book!

I loved this book! Cool, groovy and far out, man! Takes you on a sober trip to the hippie days.