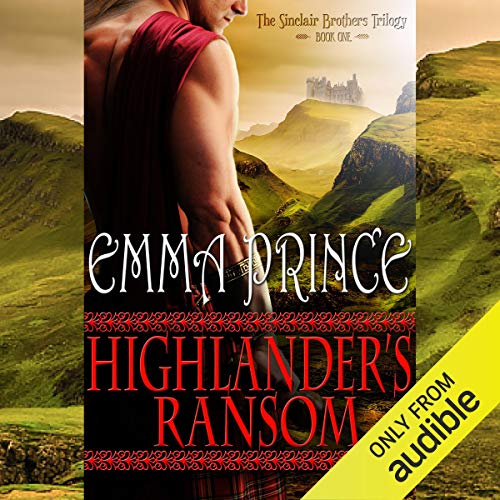 By: Emma Prince
Narrated by: Tim Campbell
Try for £0.00

Book one of the Sinclair Brothers trilogy.

He was out for revenge.

Laird Robert Sinclair will stop at nothing to exact revenge on Lord Raef Warren, the English scoundrel who brought war to his doorstep and razed his lands and people. Leaving his clan in the Highlands to conduct covert attacks in the Borderlands, Robert lives to be a thorn in Warren's side. So when he finds a beautiful English lass on her way to marry Warren, he whisks her away to the Highlands with a plan to ransom her back to her dastardly fiancé.

She would not be controlled.

Lady Alwin Hewett had no idea when she left her father's manor to marry a man she'd never met that she would instead be kidnapped by a Highland rogue out for vengeance. But she refuses to be a pawn in any man's game. So when she learns that Robert has had them secretly wed, she will stop at nothing to regain her freedom. But her heart may have other plans....

This full-length Scottish historical romance is part of the Sinclair Brothers trilogy, but also can be enjoyed as a standalone novel. Pick up your copy today!

What listeners say about Highlander's Ransom

I enjoyed this story and the characters were brought to life by the excellent narrator.

I Loved this Book

This was my kind of book. History, intrigue & twists & turns a plenty.
As a good book is supposed to do, I got swept along in the story. I did have to stop shouting at my phone when disagreeing with Laird Sinclair.
I don't think I would have felt the same if I had read the book as I think Tim Campbell did such a brilliant job as narrator.
Now onto the next instalment.
I would definitely recommend it

I read the bodyguard series (which I LOVED) before this trilogy, so I knew a bit about the Sinclair Brothers. Having said that, the passion between Robert and Alwin is palpable. It leaps off the page or at least it would if I where reading instead of listening. I found them to be passionate, brave, sexy and stubborn. I highly recommend this book, and I am looking forward to the next installment. Thankfully I don't have to wait for that one!!! I am on to the next one immediately!

Laird Robert Sinclair ambushes a wagon he thought were full of goods to sell, what he discovers in the wagon was Lady
Alwin Hewett. Lady Alwin was being transported undercover to meet her future husband. Lady Alwin's future husband was Robert's enemy, Warren. Sinclair didn't expect an English maiden to be stubborn, willful as well beautiful. Sinclair decides to take her to his home. Lady Alwin challenges Robert as they travel to his home but those challenges attracts Robert to Lady Alwin like no other.

Lady Alwin Hewett was not looking forward to meeting her future husband. In her father's eyes she was just a pawn, bargaining chip used to make alliances. She hadn't expected to be riding in a wagon that surely was not meant for a lady as well as being kidnapped by Scottish barbarians. She expected to be killed and therefore she tried to escape but not successfully. It became clear they had other ideas for her. As the days passed, she discovered that the Scottish weren't barbarians as she had come to believe, they were humane & caring. Her attraction to their leader confused her.

Laird Robert Sinclair can command an army but he meet his match with Lady Alwin Hewett.

Voice talent is fantastic! The richness in his voice encompasses your senses and your own version for Robert and Alwin comes to life.

I am a major fan of historical romances but rarely revisit the same story twice...until this wonderful book! Superb narration, feisty characters, and a lot of steamy scenes! MUST READ!

This book is a wonderful story. The performance, outstanding, not much is better than a randy Scot and his feisty lady.

Enjoyed the start of this series. Kept me listening. Enjoyed the story. I would recommend this book to others.

This is one of the best highlander books I’ve read so far. I will definitely listen to the trilogy.

Next to nothing happened the whole story. Very boring. The set up for the next book sounds potentially interesting but I will not be purchasing

I loved this story and cannot wait to listen to the other two books in this series!!!

Passions on the highlands

Truly heart stopping action and sympathy for this brave heroine. Action packed the whole way through the story.

I enjoyed this story, seemed a bit more thought out than many quick romance novels. a bit explicit in the sexual encounters. I enjoyed the ending, not rushed or dropped once the lovers embraced eachother. the narrator had a very deep voice, almost too deep in its tone. a bit distracting.