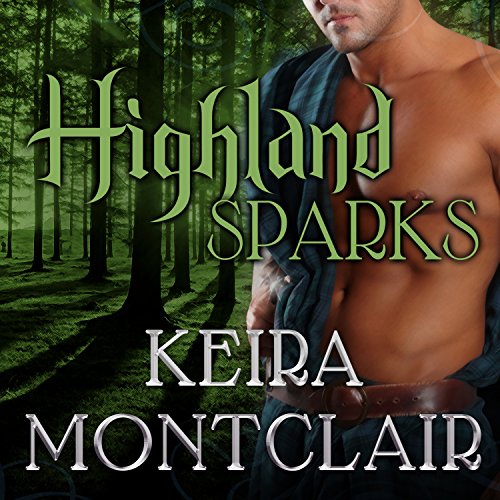 By: Keira Montclair
Narrated by: Antony Ferguson
Try for £0.00

Gwyneth of the Cunninghams has one goal: to kill Duff Erskine, the corrupt merchant who murdered her father and brother. The last thing she needs is a distraction, but fate deals her one in the form of Logan Ramsay, a maddeningly handsome Highlander who waylays her mission.

Logan and his brother-in-law seek her help in rescuing two bairns and spiriting them away to the Highlands. When Gwyneth agrees to help, she little expects Logan to assist her with her own mission....

Logan Ramsay never thought that a lass would steal his heart, but Gwyneth of the Cunninghams poses an intriguing challenge from the moment he meets her. As fierce a warrior as any man of his acquaintance, the lithe, dark-haired beauty is one of a kind. Determined to make her his own, Logan will do anything to help her overcome the wounds of her past...even if it means allowing her to endanger herself in a final confrontation with her nemesis.

The sparks between Gwyneth and Logan are immediate and blinding, but if they survive their mission to take down Erskine, they face another challenge: Will they find it in their wild hearts to relinquish their independence and build a life together?

What listeners say about Highland Sparks

It's another brilliant storyline from Keira Montclair, well worth getting. love Logan & Gwyneth 👍

Would you listen to Highland Sparks again? Why?

What was one of the most memorable moments of Highland Sparks?

Which character – as performed by Antony Ferguson – was your favorite?

the narrator is great

Insta-attraction but natural build to love

I’ve read other books in this series so maybe that’s why this felt so familiar, but I still enjoyed it. I liked that Gwyneth was different. She was raised by a man with two brothers, and she was more of a tomboy than woman.

But she was still vulnerable despite her blister, and Logan took a liking to her upon first sight. He was immediately drawn to her and knew pretty much from their first meeting that she would be his.

I love this series, but this book repeated the previous one for over six chapters. I hope the next one does not continue to waste my time. The narrator is superb.

I can’t listen to this narrator and I have suffered through many bad ones because of a good story. If he would Just read it without inflection in his voice maybe it would be better.

If you enjoy Scottish lore and sinuous stories, you will enjoy this.

Unbeknown to each other, two secret service agents work together while the woman strives to “take down “ a human trafficker finding herself as one of the victims. Shaken, she trusts no one except her Priest brother.

The woman has a vendetta to complete. She trains in archery and knives to kill the bludgeon who killed her father and brother in “cold blood”.

This is an action packed romance in a medieval setting.

Anthony Ferguson did well in his narration except for the voice of the heroine. She is an agent, a tomboy, and a determined, mostly fearless individual. The voice makes her sound soft, and femininely whiney.

Reader Beware: There are very explicit love scenes in this story.

I offer a Three and a Half Stars rating for this audiobook.

At least a quarter of the book was text from a previous book! Very annoying and really put me off the author.

My favorite so far

This has been my favorite book out of the series. Gwen wasn't a "damsel in distress" and was a fighter (not that the other women weren't fighters in their own way).

This is the story of gwyneth &logan continues....love story. Same narrator does a good job!!!