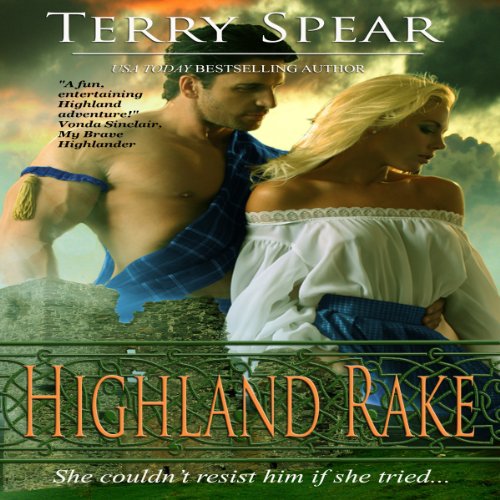 By: Terry Spear
Narrated by: Borah Coburn
Try for £0.00

Dougald MacNeill is the next to youngest MacNeill brother and he's not about to settle down, until Lady Alana Cameron is placed squarely in his lap... and then, the trouble begins. When Dougald finds Alana roaming the heather on the MacNeill lands, he takes her in hand to see his laird brother James at Craigly Castle to determine her fate. But who has sent her there and why?

Her uncle, laird of the Cameron clan, that has warred with the MacNeills for years, has made a marriage arrangement with another clan and now that is even at stake. Having witnessed her father's death, and even believing he had returned her home when all along he had been dead, Alana discovers she has the gift, or curse, of seeing the newly departed and sometimes those who should have long ago passed over. Her own deceased brother continues to plague her, the rake, and now another, who is very much of the flesh, Dougald MacNeill, has her thinking marrying a rake might just have its benefits.

Dougald's sister, who is one feisty ghost, has offered to help Alana keep Dougald in line if he thinks of even straying. But who sent Alana on a fool's errand in the first place to remove her from the Cameron's lands and set her squarely in Dougald's care, and who really killed her father and her brother, and what has it all to do with Alana? Will she and Dougald learn the truth before it is too late?

What listeners say about Highland Rake

This story is very different than the first 2 in this series. This book is a romantic paranormal adventure that surrounds mystery. It is not a scary paranormal story at all.....its more a romantic quirky paranormal. The main characters (Dougald and Alana) are very likeable from the beginning. The spark between them is endearing......very sweet. The narrator did a very good job with the voices. It took a while to get used to her Scottish accent but once I did there was no problem.

I don't read paranormal books that often but I enjoyed this one. You could definitely read any of the books in this series out of order with no problem.

I love highland historical romances and cannot help myself from selecting them. The first two books of this series were ruined by the narration. I thought this book with a different narrator would be better. Boy! was I wrong, why o why release these poorly read books. The books are expensive enough without the story been destroyed by a poor reader.

I am sure the story was probably good. What I heard sounded like it was going to be a good story. However, the narrator read so fast that I couldn't keep up. She seemed to be able to change the tone of her voice so that you would know the difference in characters and at times she would slow down to normal to tease you into thinking you were going to get a good read. And then, she started 'flying' again. So much so that you weren't able to understand the story. I will never buy a book that she narrates again.

The Duchess Wars by Courtney Milan

It was like she was speed reading. No time to absorb what was happening.

Anger and disappointment at the narrator. Don't know about the story. I am going to try to read the book as what I was able to get out of what I listened to, I think it will be a story that I like.

So disappointed. Was looking forward to this. I have eye trouble so I am hoping I will be able to 'read' the book.

Yes I think it had a great story line and kept me intrigued the entire time. It had enough twists and turns that I found myself unable to stop listening

Dougald, he kept surprising me and his gentle ways made me want to keep reading. I love the fact that he always seemed to do the right thing.

I love how she had different voices for the characters and how the story flowed effortlessly from her.

Do NOT waste a credit listening to his narrator. The story was good but the narrator was horrible. I couldn't understand anything the heroin said. I had to listen over and over and I still didn't get half of what she said. Read this one, you will probably enjoy the story but not listening to it!

It's a shame that "they" ruin a good book with an awful narrator.

can't get past the narrator voice to listen

I'm not sure if it's good or not. I can't listen to the girl reading the story unfortunately.

Another Hit By Terry Spear

Terry Spear does it again with this story. Borah Coburn makes you fall in love with the characters even more. The story was fast paced and drew you in immediately.

What did you love best about Highland Rake?

Borah Coburn did an amazing job narrating Highland Rake by Terry Spear. I was completely swept away into the Highlands and I felt as if I was truly there. I could picture the ghosts and loved how their personalities added to this amazing adventure.

Borah did a phenomenal job! This was the first time I have heard Borah's work, but it sure won't be the last! All of the characters were done perfectly and she made me feel all of their emotions as if they were my own.

I laughed and cried along with all of the characters. I also felt their anger and sadness all the same.

Thank you Terry Spear for an amazing book and Borah Coburn for doing an amazing job with the narration!

I loved this book. It is a very entertaining story. Alana can see ghost which is what really drives the story. She must keep it a secret or be proclaimed a witch. Like most secrets it is not so secret.

This is turning into one of my favorite listens. I have probably listen to this book 5 or more times so far and want to start the book all over as soon as it is done. It is a fast pace book which holds my interest. The secondary charater's, the ghosts, provide a humorous aspect that makes you begin to care about them as much as the main charater's. One of the ghost is her brother and the other is Dougald's sister. They are able to help provide all the answers that she is searching for in the death of her father.

The only problem I have with this book is the narrator talking so fast. If I had a way to slow her down I would. It is worth getting past that. She does a wonderful job on the voices.

Give this book a try. I am glad I did.

The heroine talking to the dead put a nice little twist on this highland book. The narrator took some getting used to, but once I did I found this book and in fact this series one of the better ones.