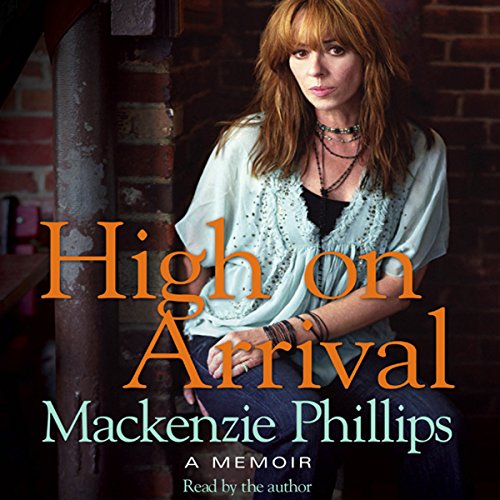 Not long before her 50th birthday, Mackenzie Phillips walked into Los Angeles International Airport. She was on her way to a reunion of One Day at a Time, the hugely popular 70s sitcom on which she once starred as the lovable rebel Julie Cooper. Within minutes, Mackenzie was in handcuffs, arrested for possession of cocaine and heroin.

Born into rock and roll royalty, Mackenzie grew up in an all-access kingdom of hippie freedom and heroin cool. It was a kingdom over which her father, the legendary John Phillips of The Mamas & the Papas, presided, often in absentia, a spellbinding, visionary phantom.

When Mackenzie was a teenager, Hollywood and the world took notice of the charming, talented, precocious child actor after her star-making turn in American Graffiti. As a young woman, she joined the nonstop party in the hedonistic pleasure dome her father created for himself and his fellow revelers, and a rapt TV audience watched as Julie Cooper wasted away before their eyes.

By the time Mackenzie discovered how deep and dark her father's trip was going, it was too late. And as an adult, she has paid dearly for a lifetime of excess, working tirelessly to reconcile a wonderful, terrible past in which she succumbed to the power of addiction and the pull of her magnetic father.

As her astounding, outrageous, and often tender life story unfolds, Phillips overcomes seemingly impossible obstacles again and again, and journeys toward redemption and peace. By exposing the shadows and secrets of the past to the light of day, the star who turned up High on Arrival has finally come back down to earth - to stay.

What listeners say about High on Arrival

Women like Mackenzie, Tatum, Valerie and Maureen I'd always wanted as friends, maybe because each have a single struggle tantamount in their lives I've struggled with all four of: drugs, weight issues, special needs, abandonment and parental issues. I'm not famous enough to do my own memoir, but came away with from each knowing that, if they hold hope for themselves, I can for me, too.

Mac's life didn't make me cry more so than it made me think of how my own family wouldn't talk about the taboos they know about, but won't discuss. Although I don't have holes in my memories like Mac does and have dark secrets like she divulges here--my dad was a bigot to whites and being born with albinism, talk about God slapping a does of reality upside his head with that idiocy of his--I'm glad she talked about it and opened herself to the dark side of it all. I think she did it for her son's welfare more so than for her own, and she desperately, imploringly didn't want him to travel the road she had to to get here. I think it's a disgrace her stepmoms Michelle and Genevieve think Mackenzie's lying to promote a book; no one makes up something like this for the sake of selling a book. And in her drug-soaked mind, who's to say these things didn't happen? And if they say it didn't happen, why are they the only two saying so? Where're the others? IOW, this is either a lie worthy of an Oscar-winning performance. . .or she's telling the truth.

Four stars b/c of the abridgment constraints, but overall, a solid read and backstory the E! True Hollywood Story doesn't fill in or give justice.

Forget the controversy surrounding the tale's authenticity--it's irrelevant. This is a very powerful story containing great lessons about tragedy and redemption. Phillips has survived so many trials that would have incapacitated so many other people, and beat the odds to tell her story. I'm glad she found the words and the strength to give it voice.

Just finished reading--actually listening to this abridged audio book about McKenzie Phillips nearly life long battle with drug and alcohol addiction. MacKenzie is the narrator and that's a positive.

It's a rather sad book but uplifting in that she made to 59 and she's clean and has been for ~10 yrs now. She's on the Orange is the New Black tv series. Her last relapse before that was 10 yrs earlier.

I don't know how this woman functioned. She was born into it and she was shooting cocaine daily while pregnant wirh her son. Her famous father of the 60s Mamas and Papa's band was personal friends with Paul McCartney and Mick Jagger and others and he was a drug addict himself who had 4 children with 4 women. Life was one big party. Drugs over the top, every day of Mackenzie's life.

She did cocaine the 1st time at 11, rolled joints at 10 for her dad's friends and came out in 2009 on Oprah about a 10 year incestuous sexual relationship with her father that started in her late teens. She mostly in all her early years, was in a complete drug induced state, despite her fame as a tv and movie actress. She was a functioning junkie until she wasn't (functioning). 2009 was also the year this book came out.

The book's worth reading. She's on s different path these days, and I don't know that many or us would have made it.

I watched my longtime friend, neighbor and security colleague deteriorate for years, and until he died not long ago of a heroine overdose, I didn't know he was shooting up. I knew he was using, too many signs of that over the years and of course, all friendships ceased except those also engaged in heavy drug use.

Such a loss and devastation to these people, and also their family and friends. And yet here is Mackenzie who had made it to the other side. Not unscathed. But here she is. Standing tall.

No redeeming quality to this book. Although the author attempts to display a righteous tone, she inadvertently glorifies the decadent behavior that was rampant in her life. It wasn't helpful at all and came across as an egocentric attempt to tell others how priveleged and unique her life has been. Don't waste your money!

Tough Life with a Hopeful Ending

This story is pretty messed up from day one. The drugs, the lack of good parenting, the dad who introduced her to drugs and much more at such a young age. This book kept my attention and I listened to it wondering "what else" could this girl face. I feel like I would have liked more details on HOW she overcame her addictions.

I know---what did I expect? this is the most boring book I have ever read (heard.) Just an endless repetition of buying/using/buying/using/stealing/using/lost opptys/misery/buying/using/apallingbehavior/using/ etc.

Thank you for sharing your story...Im clean for 5 years now and still struggle but Im good ...Thanks for your story not an easy one to tell. I hope you have a long happy life Mac!!!

Just about finished but a little nauseating. I find most biographies that feature rampant drug use tedious and boring. This one is really no different.

What was most disappointing about Mackenzie Phillips’s story?

One dimensional...very little about others.

Could you see High on Arrival being made into a movie or a TV series? Who should the stars be?

I appreciate that Ms. Phillips had the courage to tell her story. It was an interesting read but at some points hard to listen to because of everything that she went through. It’s interesting how celebrities receive special treatment in life and her dad should have paid the price for the crimes he committed. I was shocked that Mack kept going back for more even after she discovered how her father was inappropriate with her! Now I see the sweet band, The Mamas and the Papas from the 60s, in a whole new light. It’s amazing Mack survived everything she was handed in life. I recommend but it’s not an easy book to digest.

This book was captivating. So detailed - it was hard to wrap my head around Mackenzie’s life and how she survived. My heart broke for her by the continuous abandonment from her father. I am glad she survived to tell the tale.