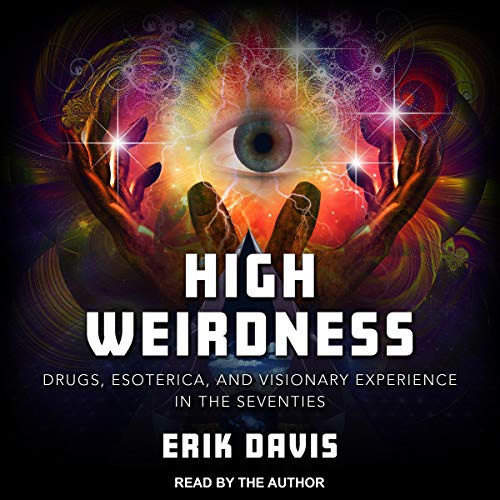 An exploration of the emergence of a new psychedelic spirituality in the work of Philip K. Dick, Terence McKenna, and Robert Anton Wilson.

A study of the spiritual provocations to be found in the work of Philip K. Dick, Terence McKenna, and Robert Anton Wilson, High Weirdness charts the emergence of a new psychedelic spirituality that arose from the American counterculture of the 1970s. These three authors changed the way millions of readers thought, dreamed, and experienced reality - but how did their writings reflect, as well as shape, the seismic cultural shifts taking place in America?

In High Weirdness, Erik Davis - America's leading scholar of high strangeness - examines the published and unpublished writings of these vital, iconoclastic thinkers, as well as their own life-changing mystical experiences. Davis explores the complex lattice of the strange that flowed through America's West Coast at a time of radical technological, political, and social upheaval to present a new theory of the weird as a viable mode for a renewed engagement with reality.

What listeners say about High Weirdness

An amazingly well researched and intelligently presented analysis - easy and enjoyable to listen to. This is a must read book

A ‘MASTERPIECE’ that is Awesome beyond words. You will have to read it to understand. I would like to add, that in addition to the books content, this is undoubtedly the best author-narrated audio book I have ever had the pleasure of listening to. Fans of, and listeners to, Erik Davies’s podcast ‘Expanding Mind’ you are in for really weird and mind-blowing guided tour of the 70’s. Enjoy!

It was difficult to listen for the first two hours (+-). It was like a long winded, endless essay. Almost gave it up. After that it gets better and more interesting. Many interesting kaleidoscopic points of view.

Spellbinding and detailed account of a very squirrely time

This was a very deep and engaging work that drill to the depths of countercultural thought. Davis is a master wordsmith and his extensive knowledge on this fascinating topic is a continually source on intrigue and entertainment.

My vocabulary has grown tremendously and hearing the words in Erik’s own voice was a pleasure. His emphasis and cunning shine through in this audiobook, but I will need to relisten to it many times in order to absorb the finesse and nuance that it exudes.

The book is very focused on Philip K Dick and his works. Great research and storytelling.

Excellent background on the history of psychedelics and how they affected Psychonaut pioneers like Anton and Dick.

High Weirdness is a deep, deep dive into the experiences, experiments, theophanies and theologies of three true architects of 1970s American (especially Californian) psychedelic, psycho-spiritual "occulture" -- Terrence McKenna, Robert Anton Wilson, and Philip K Dick. All but the final chapter was written for Erik Davis's doctoral thesis, studying under Jeffrey Kripal, so if you follow the work of either of these men, Davis or Kripal, you already have a good idea what's in store for you. HW is a a smart and exuberant exegesis of the lives and minds of the profiled visionaries, but also of the Seventies as a decade, at least the countercultural, weird side of the Seventies. You won't find just McKenna, Wilson, and PKD here, but also a smorgasbord of 70s psycho-luminaries like John Lilly, Timothy Leary, Jacques Valee, etc. It's a long, strange trip that never disappoints.

I listened to the Audible audiobook of High Weirdness narrated by the author, Erik Davis. At 21 hours it's probably the longest audiobook I've attempted, but there is literally never a dull moment. When it ended, I thought, "Wow, I wish there was more of this!" Which led me to discover Davis's podcast "Expanding Mind" on Spotify, another real treasure trove of intelligent weirdiana.

If you're not familiar with McKenna/Wilson/Dick, you might at first be put off by the way Davis affects their voices in HW. It pays to know in advance that he either knew all of these people personally, or he's spent years listening to their voices on tapes, videos, etc. He is actually doing a pretty good impression of their vocal styles. Think "homage," over mockery.

A highly academic, but still accessible, overview of general 1970's esoterica. The best book i've ever encountered on "the WEIRD". The author does an excellent job narrating(his Terence McKenna impersonation is hilarious and spot on.)

This audio book is phenomenal! Read by the author makes it a tremendously entertaining listening experience. I love it so much, I just finished and I’m going to listen to it again right away. This is exceptional. Well done 👏👏👏🔥⚡️🧙‍♂️👁

Phenomenal book. The sci-fi writers, the occult, the Gnostic, the Logos. This is a great book about the fringe of California from the 70s onward.

Davis is the best

If your'e already here, you probably love Erik Davis. I have listened to hours upon hours of his podcast so it's a real treat to listen to a whopping 21 hours of him narrating his way through this amazing book. His wizened, wry, "stoner professor" style is just the Dudest Dude around and it feels like hanging out with him in a basement where the night goes on forever.

If you are a fan of Terrence McKenna this is offensive

The writer cherry picks things Dennis and Terrence said in their twenties. Seems to misrepresent Terrence based off things Dennis said in the screaming abyss and totally misses the point on a lot of Terrance’s insights. Terrence had a massive rare book collection that burnt in a fire and this guy acts as if Terrence just made things up. I disagree Terrence was a genius about the occult and this guy seems to be not immersed enough in esoterica or psychedelics to come to the scathing reductionist conclusions he did.

I tried to listen to this but, being someone who has listened and read a lot of McKenna this is outright a misrepresentation of a genius within the psychedelic community. The narrator mispronounces a lot of words, and does a grotesque impression of Terrence that makes him sound like an extreme dork.

Go on YouTube and listen to the many great lectures Terrence gave for free and don’t waste your time or money on this drivel.

All the weird shit I love in one place.

Not for everyone but definitely for me! An essential investigation into a core American grouping the Weird back half of the 20th century.

In the beginning was the Weird.

Weirdness is a part of life. In the subjects of this book, we see a willingness to embrace the weird which is encouraging and exciting.

We also see a grasping at weirdness, an escape into uncertainty and novelty, and it’s consequences.

Read by Erik Davis, the author, who is a great orator and who is, of course, uniquely qualified to wyrd his own words.