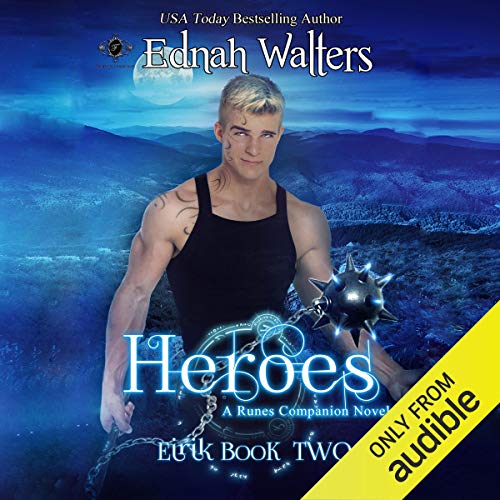 By: Ednah Walters
Narrated by: Gary Furlong,Kelsey Osborne
Try for £0.00

Heroes are not born. They rise out of love and duty. What if you have to choose?

Book two of Eirik Trilogy continues the story of a god and a Mortal girl.

Eirik wants nothing more than to show Celestia - the Witch who pulled him out of the darkness - that his feelings for her are real, but his parents expect him to avenge a wrong done to his family. To make matters worse, Celestia is moving on and is already dating another guy. Then Eirik discovers she is the key to accomplishing his goals. Caught between love and duty, Eirik will do whatever it takes, including getting up close and personal with Celestia, to get his way.

Celestia is convinced she is drawn to Eirik because of the bond created by the dragon's kiss, so she pushes him away. But when he comes to her for help, she is once again thrust into his world, where things are never what they seem.

From Earth to the realms of the gods, betrayal follows them and help comes from unexpected sources. But when the time comes for Eirik to choose, will he fulfill his duty or follow his heart? Everything rests on his shoulders as the wrong choice may lead to Celestia's worst fear - the rise of the Harbinger of Death.

What listeners say about Heroes

This is the second book about Eirik, one of the three friends who grew up together in Kayville. He has discovered he's a dragon shifter and the one who will inherit Odin's throne after Ragnarok.

Eirik and Celestia along with a merry gang of Grimnirs and friends set off in search of Angraboda and a group of orphans from Earth. Finding them, Eirik also finds his long, lost sister, who has beaten Celestia. Eirik adds healing runes which then sends Celestia on her way to becoming immortal and into the AP(Astral. Plain) for three weeks.

Upon her waking, she and Eirik begin their romantic relationship.

Thank you Gary Curling and Kelsey Osborne for your dynamic narration!