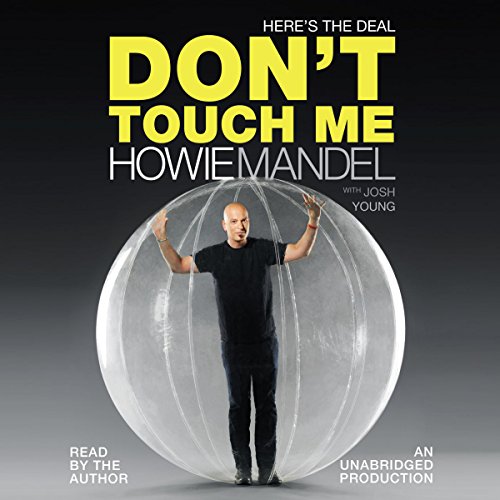 A frank, funny, no-holds-barred memoir that reveals the Deal or No Deal host's ongoing struggle with OCD and ADHD - and how it has shaped his life and career.

Howie Mandel is one of the most recognizable names in entertainment - respected by his peers and beloved by audiences as the host of the enormously popular prime-time game show Deal or No Deal. With a career that spans three decades and many different show-business platforms - he's a renowned stand-up comedian who continues to perform more than 150 sold-out shows a year, he created the award-winning TV show Bobby's World, he's starred in feature films and the hit TV series St. Elsewhere, and he's also hosted his own daytime talk show - he's one of the most versatile performers anywhere. But there are aspects of his personal and professional life he's never talked about publicly - until now.

Eleven years ago, Mandel first told the world about his "germophobia." He's recently started discussing his adult ADHD as well. Now, for the first time, he reveals the details of his struggle with these challenging disorders. He catalogs his numerous fears and neuroses and shares entertaining stories about how he has tried to integrate them into his act. "If I'm making myself laugh," he writes, "then I'm distracted from all the other things going on in my head that are, at times, torturous." And he speaks frankly and honestly about the ways his condition has affected his personal life - as a son, husband, and father of three.

As heartfelt as it is hilarious, Here's the Deal: Don't Touch Me is the story of one man's effort to draw comic inspiration out of his darkest, most vulnerable places. It's sure to please Howie Mandel's legion of fans - and provide hope to the millions who strive to succeed in spite of OCD and ADHD.

What listeners say about Here's the Deal

So I had never heard of Howie Mandel (because im british) before but I saw a small clip of him talking about his struggles with OCD & I was instantly interested in how other people cope. I would of liked a little more on how he copes day to day but otherwise this book was brilliant. I was crying with laughter at some of his stories (which is awkward when you are at work). A read for anyone who needs some humour.

Everything You Never Thought You Wanted To Know

I've always found Howie Mandel somewhat amusing, and he's clearly a smart guy who has carved out an interesting and multifaceted career for himself. I can't say I was anxiously awaiting a Mandel biography, because I never really thought I wanted to know more about the guy. But I often like bios and comedy books that are read by the author (it's like a long comedy special), so I gave "Don't Touch Me" a try. And I actually really enjoyed it.

First, it is a fast-paced, entertaining bio with the occasional guffaw-worthy moment (although not many, probably by design). Some of the attempts at humor are a little lame and even blatantly stupid, although Mandel has made a comedy career out of milking every excriciating drop of funny out of overtly stupid humor. I hate to admit that I find his rubber glove over the head routine funny, but it really (kinda) is. But I was surprised to find that the most compelling parts of this book were the serious segments that weren't meant to be funny at all. I learned things about him that I didn't know I cared about, and while nothing has changed in my life or his as a result of learning those things, it was a very enjoyable way to spend a few hours.

One of the biggest surprises was how much of a jerk Mandel was to his friends, family and fans, particularly for a guy who seems so amiable and always has a warm friendly smile on his face whenever you see him. It's one thing for celebrities to admit to some debilitating illness, addiction or challenge --- don't pity me; I've just had to learn to bear my burdens! -- and Mandel's severe OCD certainly qualifies as a challenge. But his willingness to show himself as a real tool and not go out of his way to excuse it was rare and even a bit refreshing. Most of all, it made for very compelling listening.

OK, I can't even imagine someone else narrating this book. I bought this because I do like celebrity bios. I was not a fan of Howie's, although I was interested in his OCD. I was amazed at how candid he was. He truly was a jerk. I'm shocked that he admits this. BUT, he does have some nice sides to him, that make him more likeable. His wife truly does deserve an award! I bet if I had read this book, I would have put it down. I listened to this book all in one sitting. He was hilarious! And adding little side bits to the book, was great. I love hearing how the celebrities had to struggle early in their lives, makes them more human. I would recommend this audible book, as it is a great listen, had me laughing at many instances. Only Howie could have read this. Any other narrator would have killed the book.

I have never been a Howie Mandel fan, but having heard him interviewed once about his OCD I was interested in hearing more. The book is fast paced and there are some laugh out loud moments. I was pleasantly surprised at how frank Howie is about his issues and how he doesn't use any excuses. I was also surprised that he has been with his wife since high school. One of the things I liked best about the book was when Howie stepped back and commented on what he was reading for the benefit of the listener--it really felt more like a performance than a read. I highly recommend this book.

Such an insightful read, and incredibly funny!!

Struggling with ocd and germaphobia myself, this was a must read for me!! I really enjoyed listening to Howies story, and getting a ton of laughs. I never knew he was this funny before!! I wish he would write another book! I would be his first customer!

Among my many mental problems the main things that always bothered were my OCD, ADHD, and depression. This really helped me understand that I wasn’t alone and a lot of the stories of his everyday life I could fully relate to.

Just not for me.

I didn't realize what kind of humor this was. After a good while of listening to him talking about penis' I just felt like I was listening to a 5th grade boy... I wasn't offended, it's just after a while he just came off as complainey, whiney, and it just got annoying.

I don't think the narrator detracted from the book. I love it when the person who wrote the book, reads the books. I think you get their personality and just get a different experience from it because they are first hand with the information instead of removed 2nd hand readers.

Disappointment and annoyance. I thought the title sounded really funny. I honestly didn't know a ton about Howie Mandel's humor so because the title made me laugh I thought the book would (I fell for the cover!! Lesson learned!)

What made the experience of listening to Here's the Deal the most enjoyable?

Howie Mandel narrating his own story made it enjoyable - just the continued pleasure and discomfort at his own antics, and his OCD, made it very listenable.

Oh dear there were a lot of them but perhaps the scene where he and his wife were in the shopping centre looking for make up...or where his long suffering friends FINALLY give him his comeuppance 20 years later! I can't elaborate without spoiling the read!

Laughed so hard I cried!

Where does Here's the Deal rank among all the audiobooks you’ve listened to so far?

The funniest book I have downloaded so far.

What does Howie Mandel  bring to the story that you wouldn’t experience if you just read the book?

Howie narrates so well, you almost feel like he is sitting beside you, telling his life story. He is a fantastic speaker, and as you already know, very funny.

I wish I could have listened from start to finish

I am certain you will not be disappointed with this purchase. It is so light and funny, you will want to listen to it again. I did!

He is very honest about himself in this book. He tells a lot of stories about practical jokes he's played on his family and friends...many of them only funny to Howie.

Mandel's life is full of twists and adventures, and he relates them in a fun and engaging way. After reading the book and then listening to the audiobook, I'd have to say the AUDIObook is the best medium for his story - especially with Mandel reading. So many times I laughed out loud while listening, and I credit his storytelling ability and inflections... and his experience as a stand-up. One warning, though - he does curse throughout the book (especially the later half), so it's not totally family-friendly.