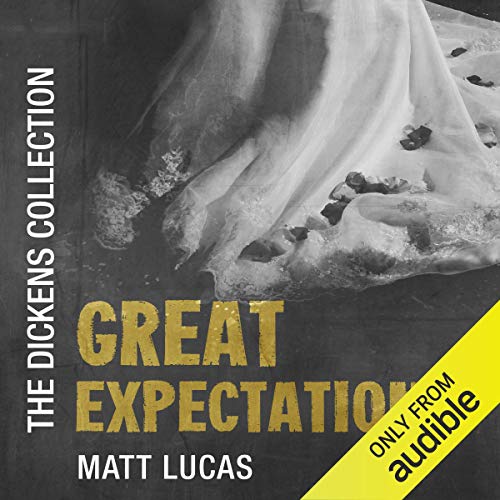 In this Audible Exclusive performance by Matt Lucas of Great Expectations, Charles Dickens demonstrates that conscience, loyalty and empathy are virtues far more valuable than intellect, wealth and social standing.

First published in Dickens’ own periodical, All the Year Round, the novel was divided into nine monthly instalments, from December 1860 to August 1861. Unsurprisingly, it was an instant success and managed to sell over 100,000 copies per week. Though written at a challenging time in Dickens’ life, when the impending breakdown of his marriage loomed over him, Great Expectations proves to be one of his most optimistic, comical and romantic novels.

This exclusive recording of Great Expectations starts with a unique introduction written and narrated by Howard Jacobson, the Booker Prize-winning author of The Finkler Question, in which he explains why Great Expectations is his favourite Dickens title.

Through a rich first-person narrative, listeners are introduced to the character of young Pip as he visits the tombstones of his beloved parents. Unexpectedly confronted by the dark and mysterious Magwitch, a convict in desperate need of food, Pip must decide whether to aid or impede the stranger standing in front of him - a decision which will shape the course of his life. Introducing some of the most iconic, Gothic and comically repulsive literary characters of all time, from the vengeful Miss Havisham, torn apart by a man she once loved, to her beautiful yet seemingly impenetrable ward, Estella, the listener is propelled through a wonderfully Dickensian world.

Much like Pip, Charles Dickens was born into poverty. In his case, it was due to the incarceration of his father, and Dickens was forced to set aside his education in order to work at a nearby factory. Amazingly, this did not deter the young Dickens from rising above his station, and he went on to publish 15 novels, various articles, five novellas and hundreds of short stories. He lectured and campaigned for fair treatment of the lower classes as well as for children’s rights and education.

British comedian, actor and screenwriter Matt Lucas is best known for the television show Little Britain as well as playing both Tweedle Dum and Tweedle Dee in Alice in Wonderland and his role as Nardole in the 10th series of Doctor Who. Able to embody so many characters with just his voice, Lucas is a perfect fit for Great Expectations.

What listeners say about Great Expectations

Probably Dickens' greatest work, brought to life by a fabulous narrator. Great Expectations is also one of Dickens' most accessible works with a lot less of the waffle that fills his more weighty tomes.

However, if you don't know the story then I suggest you skip the introduction narrated by Howard Jacobson, because he gives away the entire plot.

beware: spoilers in the introduction to this book!

this is a great, great reading of a classic novel, and Matt Lucas is a genius, on form. the introductory essay contains major spoilers, as if Howard Jacobson has assumed that everybody listening will already know the story through and through. Still comes highly recommended: just don't listen to the intro until after, if at all.

another favourite in this series of new recordings is the brilliantly nuanced reading of Little Dorrit by that other genius, Juliet Stevenson, who brings out all the subtle light, shade, and humour in that book, just as Matt Lucas does here. Both readers – and readings – are national treasures.

(amongst the slightly older recordings of other Dickens on audible, the readings by simon vance, nicholas boulton, and anton lesser are also superb, and there is an amazing video of simon callow talking about dickens at the sydney opera house in 2019, on youtube, fyi.)

I don't believe anything new can be said about "Great Expectations", buying this audio book I already loved it having read it several times previously however Matt Lucas is an incredible narrator, it is heaven to listen to, no visual interpretation could be as vivid and rich and bring the characters to life in all their colourful eccentricities as he does.
I would recommend this to anyone.....I LOVED every single minute.

Perfect for the commute

As others have said, skip the introduction as it is loaded with spoilers.

Narration was spot on. Matt Lucas does a great job and doesn't resport to the ministry of silly voices at all, which I was slightly nervous about when I downloaded the book.

Story is a meander of events ranging from absorbing to improbable but the writer paints an engaging picture throughout. Perfect for whiling away a daily commute.

A brilliant narration by Matt Lucas, throughly enjoyed this tale from days past, highly recommended

A beautiful reading of an at times dull story

I have to confess, I’ve enjoyed the performance more than the story itself. The story goes from the sublime to the predictable, back to the sublime and then down to dullness and sentimentality. The performance, however, never lets you down.

This rendering of Great Expectations was a masterpiece of a fantastic book. This is one of the most well known stories that Dickens wrote. It was so well written and narrated that the highs and lows of the story had me walk along the windswept marsh, then pushing through the teeming streets of London! Listen and enjoy.

A thoroughly enjoyable story: better than the David Lean film which is my favourite adaptation. Matt Lucas performed all parts well with the exception of Magwitch; a large man who would never had the screechy voice portrayed. That said; it was well narrated.

A pip of a book

SPOILER IN THE PREFACE

As I stated before there is a fairly big spoiler in the very beginning during the preface. I'll leave the exact nature of the spoiler out for those who, like myself, haven't read it yet. However I will say that the spoiler is one that completely ruins the nature of the mystery surrounding Pip and his benefactor. Because of which left me struggling to finish the book. Though the last few hours which were not spoiled and had some secret and suspense was rather good.
Overall a good book.

The Matt Lucas performance of Charles Dickens fabulous novel is engaging and perfect! I enjoyed an all-time favorite story even more while listening to it.

I am happy that I continued to the end of this lengthy tome. Now I look forward to the movie!

Spoilers in chapter one

Great Expectations is a good listen. Just be careful not to listen to chapter one first. Of course that makes no sense, but chapter one is a discussion of the book which gives spoilers. Also, I like to form my own opinion of a book before hearing others opinions.

Dickens is a time traveller who loved movies

Firstly Matt Lucas gives a tour de force as more than the narrator. He develops each character and brings the story alive. When Dickens has the time to observe people, scenes, and social interactions, his piercing and humorous gaze can transport us. About half way through Great Expectations Dickens becomes preoccupied with wrapping things up with all the pizzazz of a Hollywood scriptwriter. As he busies himself tying up all the loose ends its a bit rushed and descriptions are dispensed with. A shame for it is in the way he describes a face or gently ridicules the motives of his protagonist that we laugh at them, with him, and at ourselves.

Narration, a bit over the top

I am only going to discuss the narration here. I have been wanting to read this for a long time, and fully intend to continue with it, but have only made it a few chapters in, and have decided the narration is not for me. It is not that the narration is not good - in a sense it could be considered excellent. Matt Lucas has an fine voice, and is adept at portraying the array of characters in a highly dramatic fashion. But I found it all just a bit too much. When we read a book in print, we are free to add and imagine degrees of inflection and accent to voices of various characters, and we all do this to more or less extent. But when it is all done for us, like in this version, I found myself resentful, pulled out of the story, and want the narrator to just shut up - not any way to get through a book. At times, Mr. Lucas' characterizations bordered on Monty Python parody territory. Frankly, I just found it irritating. I realize that for many reader/listeners, this will be exactly what they want, and I hope my opinion will help them decide in favor of this edition out of the half dozen or so versions of this classic - if this is, in fact, what they want: a highly dramatized experience. For me, I want a version, a little less excitable, and more neutral, so I can add my own inflections to the narrative voice in my head.

A classic tale written to be read around the fire each
night. Fantastic performance...one actor, multiple characters.

the recording would never let me see the chapters

This Charles Dickens novel is a perfect candidate for an audible book read by a narrator who can bring life to the book’s many wonderful characters. As much as I enjoyed David Lean’s classic black and white movie adaptation, there are many left out characters and details to be found in the book. Listen to this if you are looking for an escape to another century. NOTE. The introduction includes a spoiler, so skip it unless you already know the outcome.

The story is long and filled with unnecessary dialogue but nevertheless it is a classic. The voice acting is on point and differs for each character which makes it easier to tell them all apart. Worth listening to if you’ve never read Great Expectations before.